Are HMRC raising taxes by stealth? 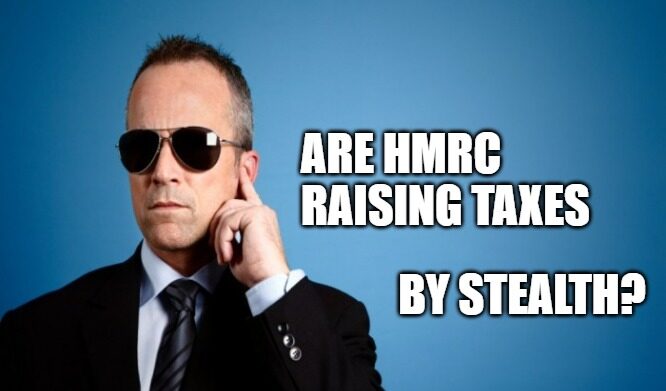 The steady erosion of tax benefits

Although the UK is experiencing inflation, almost as bad as dreadful rates in the 1980’s, most of our many and varied tax allowances, such as mileage rates, have remained frozen for at least a decade. This is leaving both taxpayers and employees out of pocket during the current cost of living crisis.

As the Bank of England forecasts inflation to peak at 11% by October, many financial commentators have pointed out that frozen tax bands mean cash savings will lag and the government will be increasing the tax take by stealth.

The Mileage rates, for example, have stood at 45p per mile for the first 10,000 miles per year since 2010. Also, because of the steady erosion of the tax benefits of company car ownership, many employers are choosing to reimburse staff for the mileage travelled in their personal cars instead. However, due to the unchanged mileage and the soaring cost of petrol, people who rely on their car for work are effectively being targeted by HMRC, which is quite simply wrong.

While this would represent an additional cost for businesses, those costs would be deducted against corporation tax; which would effectively make it tax neutral as far as employers were concerned, but a big help for their employees.

This approach would be far more targeted than reducing fuel duty, at a time when the average price for a litre of petrol is up to 191.10p, while diesel prices have also risen to 198.96p per litre. Leading accountants are now campaigning for the government to temporarily double mileage rates to 90p per mile for the next two years and then review the rate, with regular reviews every two years thereafter.

The truth is that isn’t just mileage rates that have been frozen, they are only one example. Financial Times, journalist Charles Calkin argues that the government is taxing “by stealth” by freezing existing tax allowances. Calkin tracked allowances and documented what the threshold would have been if adjusted for inflation.

There are many more frozen allowances, such as the £140 p.a. flat rate cleaning allowance for construction workers. The net benefit of £28 is supposed to reimburse the individual for the annual cost of cleaning his work clothes and with today’s costs is clearly a joke.

As prices spiral ever higher, so does the amount of VAT pouring into the Treasury’s coffers. It’s no good the Government whinging that it can’t afford to raise benefits, subsidise your energy bills or bring allowances up to date when the amount of tax it is receiving is rising even faster than inflation.

On a whim, I decided to check my tax return notes for 10+ years ago and discovered a lovely example of what this Blog is getting at.

The example I found was on mileage rates which are supposed to cover all the costs of running a vehicle. In 1999, 13 years ago, if you ran say a 2 litre volvo estate you would have been allowed 62p per mile. So I fail to see how it can now cover those same costs at 45p per mile, when fuel isn’t 69p per litre anymore, MOT‘s aren’t £20, a service is a damn sight more than £80, insurance costs are no longer around £100, not to mention Road Tax, which has also shot up.

I rest my case!