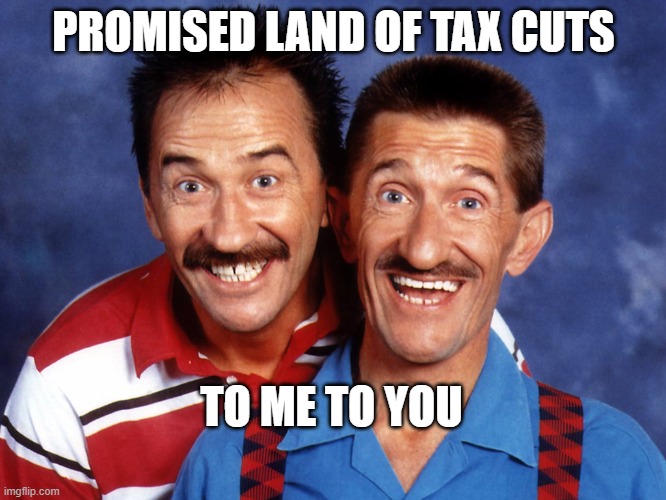 Boris & Rishi are on the case

Recently there’s been quite a lot of chatter in the corridors of power regarding tax cuts.  Whilst constant murmuring about tax cuts from those in high office should be encouraging, it would be nice to see some action. Is it ever going to happen and, if so, which taxes are likely to be cut?

On the face of it, good news is on the horizon, since both Boris and Rishi Sunak seem to be competing with one another over who can squeeze the words “tax cuts” into any announcement the most. But as so often with this government though, the meaningless mantras don’t seem to be backed up by any firm policy commitments, because the country is led by politicians who are confirmed advocates of tax cuts that don’t actually involve cutting taxes.

Despite seemingly constant mini budgets, every time Rishi Sunak has boasted about a tax cut, it has meant, merely a mitigation of a tax increase, which is not quite the same thing.

Last month Rishi Sunak proudly announced a tax cut with his decision not to implement tax on sugar and salt. But to my way of thinking, cancelling a tax that hasn’t yet been brought in is not exactly a tax cut. Worse still, despite all the talk of tax cuts, the current administration has pushed us to the point where our tax burden has hit its highest level in over half a century.

Without wishing to put a dampener on anyone’s expectations, the truth is that the economy is tanking, public debt is close to being out of control, the ratings agencies are considering downgrading their assessment of UK plc, thanks to lack of productivity which, in turn, according to the Office for Budget Responsibility (OBR) is hardly helped by the so-called Brexit bonus turning out to be minus 4%.

Most economic commentators are issuing consistently bleak predictions. Embarrassingly, the OECD expects us to be the worst performer among developed nations, apart from Russia. Indeed, if the G20 were the Premier League, the UK would be I the relegation zone.

Therefore, however much Boris and Rishi try to jolly along their Parliamentary colleagues with talk of tax cuts, it isn’t obvious that anything is going to happen in the short to medium term, however much it is needed as the cost-of-living increases are becoming increasingly damaging.

I have never quite got the hang of the Conservative Party’s favoured economic theory propagated by Milton Friedman, that architect of monetarism so much loved by the late Lady Thatcher. This is the idea that if a government reduces taxation, then it will increase its tax revenues. Although I’ve never subscribed to this theory, at least Maggie did bring down taxes.

Taking my own personal situation, if my tax burden was reduced by 5%, the government will get 5% less in tax from me. Against that, I may spend a little more but even if the items were acquired in the UK and fully VATable, only 20% of that would flow back to the Exchequer. There might be a multiplier effect, but it is hard to believe that this would replace the whole of the 5%.

Perhaps some economic guru reading this Blog might wish to come up with a simple example to clarify my understanding? None of this makes much sense, given the government’s equally vocal talk of “levelling up”, though that also seems to be based on hot air rather than careful strategic planning.

But let us assume that Rishi and Boris are serious, or a I like to call them the ‘Chuckle Brothers’ they first have to identify exactly which taxes they could actually cut? For a start, they first need to establish who they are trying to benefit. If they are serious about wanting to help the poor to level up, then reversing the freeze on personal allowances might be a good start, as could a reduction in VAT on fuel and energy.

To help business, cuts to business rates, VAT and corporation tax could be good news, while some sort of enhanced investment incentive would certainly be welcome, especially for green projects. As the chorus of constant hints and vague promises in recent months has, by an amazing coincidence, coincided with the negative fallout from Partygate, you are forced to ask the question, do they really mean it?

Unfortunately for the average taxpayer, the most likely action will be inaction.

In my opinion, Rishi Sunak is between a rock and a hard place. I’m sure his instincts are to cut taxes but I just cannot see how it can be done anytime soon with the state of not joust ours but the world economy.