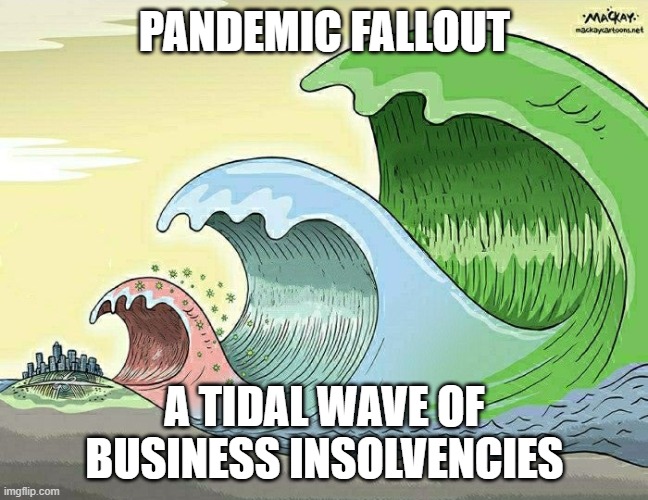 Since April 2022 compulsory liquidations have risen

The business insolvency tsunami we saw in our peripheral vision at the end of the tax year in March, now appears to be accelerating and recent data shows it is now starting to crash on the shores of the business world.

Business Insolvencies: What are the numbers?

According to the Insolvency Service, there were 1,991 registered company insolvencies in April 2022 (more than double those registered for April 2021), and 39% higher compared to those for the same month in 2019. Creditors’ voluntary liquidations (CVLs) have had the highest rise standing at 1,777 representing a 118% rise compared to April 2021, and 74% higher than April 2019.

Unfortunately, the boom promised by Rishi Sunak and what many were hoping for when pandemic restrictions ended, simply has not happened as the UK has moved from one damaging set of economic stressors to another with hardly a moment to catch breath.

“Although the insolvency statistics for April 2022 show a slight decrease in corporate insolvencies compared with March 2022, the significant upward trend remains,” warns Simon Monks, restructuring and insolvency director at Azets. “While the material increase on this time last year is understandable, due to government support available at that time, it is alarming that there is also a material increase on pre-pandemic levels.”

This clearly implies that economic resources are being realigned and as a result, a number of businesses have been deemed to be no longer economically viable, either by their shareholders or creditors. It is also clear that many of these business casualties have only been able to survive until now due to generous support schemes.

Another factor suggested by the increasing insolvency numbers is that large numbers of directors appear to lack confidence in their ability to continue trading in the current climate and are choosing to close their businesses now rather than being forced to do so in the future.

The best advice to any directors who are concerned about their business is to seek advice and to do it as soon as possible. The Insolvency Service is particularly helpful in this area and can assist in obtaining debt moratoriums or with registering a restructuring plan at Companies House.

Reasons for the rise in business insolvencies

Research by RedAlert, the petitions, receiverships, administrations, and resolutions service, shows that so far in May 2022 1,048 firms have already gone bust, with the sectors containing the most casualties being building and engineering, hospitality and the professional services sector.

“While the number of compulsory liquidations remains broadly flat, our expectation is that we will see an upward trend in the number of corporate insolvencies as the economy gradually returns to a business-as-usual state.” says Monks. “There appears to be a realignment of underperforming business as we continue to move away from the pandemic. However, even better-performing businesses are being challenged, not least by the cost-of-living crisis, which has led to the biggest squeeze on real wages since records began.”

Just at a time when businesses are trying to get back to their pre-pandemic trading levels, workers are demanding higher wages to keep pace with the cost of living. Businesses who were once able to absorb rises in input costs, are now finding themselves faced with raising prices to customers just to try to stay in business.

As businesses struggle with the aftershocks of the pandemic, they are being hit from various directions. Energy costs are escalating, there’s a shortage of many raw materials and there are severe supply-chain challenges. On top of this is the impact of the Russian invasion of Ukraine; the combination of these factors has caused inflation to surge and growth to slow around the world. Now with the Bank of England forecasting that a recession is on the horizon (and with recession, we normally see rising levels of redundancies), the immediate future does not look rosy.

During the pandemic, government support of Bounce Back Loans and furlough schemes have kept some businesses afloat and, in the months ahead, the Bank of England will need to achieve a difficult balancing act if it is to ward off a return of a 1970s-style global stagflation.

The Bank will need to tread carefully, and we are likely to see 2022 as a pivotal year for monetary policy. Raise interest rates too rapidly and the increased borrowing costs will depress growth, sending the economy into a downward spiral, tipping it into deep recession – and unfortunately, taking many in the business world with it!

In doing the research for this Blog, I became more and more pessimistic about the short-term future of the UK economy. This is largely because the usual levers the government and the B of E have at their disposal are of little use in the whirling maelstrom of the global turmoil and I suspect that until Putin is forced to stop his senseless war, we will just have to batten down the hatches.

Disguised Remuneration: Where do you stand now?
13 Unusual Excuses as to why an invoice wasn’t paid
What to get an Accountant at Covid Christmas