I’ve made a mistake with my tax, what do I do?

by David Jones | May 5, 2022 | Business Tax, Personal Finance, Self Assessment 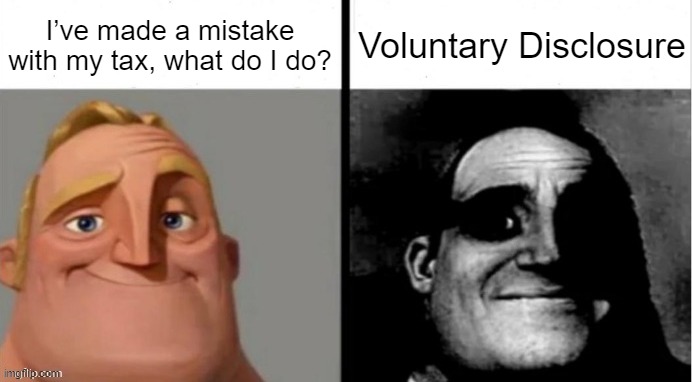 Tax Accountant explains it all

Whether it’s a VAT error, income you left off your tax return, self-assessment or something else, it’s essential that any submissions to HMRC are completely accurate. Unfortunately, for most individuals, life is hectic and none of us are perfect, so mistakes can happen.

Of course, sometimes tax errors aren’t always as innocent as they seem, which is why HMRC has tough measures in place to tackle tax evasion. The fact remains however that innocent or not, people must fess up sooner rather than later. Ignoring a known underpayment of tax can lead to legal action and expensive consequences you would do well to avoid.

From my experience, HMRC takes a rather dim view of anyone knowingly not paying any tax that is due. Also, the latest statistics show HMRC opened 170,000 compliance checks (tax investigations in layman’s terms) in the last six months of 2021, over double the 78,000 opened during the previous six months. So, in most cases it’s not if you’ll get caught out, but when!

Voluntary disclosure is a way of owning up to any tax mistakes that you may have made and anyone taking this route is likely to be seen by HMRC in a much more favourable light. It is also likely to result in HMRC showing leniency in terms of fines or penalties they could impose.

Voluntary Disclosure is the channel by which HMRC can be informed about a non-compliant activity or error. It is effectively a ‘get-out-of-jail-card’, which is given to those individuals who come forward and own up in a timely manner.

It will also mean that you will be far less likely to face a full-blown tax investigation. Apart from anything, it’s the chance to put things right and ultimately have peace of mind, but it is important that once you realise that you’ve made an error that you do something about it as soon as possible.

It’s easy to fall into the trap of thinking HMRC only needs to know about large mistakes or deliberate fraud. This is not the case. Even the smallest errors can trigger an investigation and coming clean as soon as possible will always be to your advantage. You never know, if HMRC decide the error was inadvertent and you pay the tax immediately, they can and often do, waive any penalties.

Voluntary Disclosure: What taxes are covered and how do you correct the error?

HMRC have provided the Digital Disclosure Service which allows you to correct any errors, but there’s then a limit of 90 days by which any outstanding tax must be paid by once you’ve owned up to your error.

It goes without saying, that as soon as an individual or a business becomes aware of any tax issues. HMRC must be told by completing the DDS form. Even though fessing up my have significant financial repercussions such as cashflow issues, time is of the essence to avoid more serious consequences.

How to prepare a DDS form

If there is income that needs to be disclosed, the tax owed will clearly need to be calculated, which should happen automatically by using the DDS form. But remember do not include any income that has already been paid correctly. Hopefully you will be able to pay any outstanding tax, but if you genuinely can’t pay, you will need come to make a time-to-pay arrangement with HMRC.

Also, if HMRC accept that you are genuinely unable to pay the full amount without putting your business or indeed yourself, into severe financial straits they may even agree to a reduced payment.

Once a business or individual has informed HMRC of their intention to make a disclosure, HMRC will give them a unique Disclosure Reference Number (DRN) and Payment Reference Number (PRN) to be used when paying the outstanding amount.

Voluntary Disclosure: How to pay the tax owed

Ideally, payment should be sent at the same time as disclosure, and the PRN sent previously to you by HMRC will be needed for the transaction. The payment should also be received by HMRC within the 90-day deadline as set out in the notification acknowledgement letter, that is automatically issued.

Assuming all is well and HMRC accepts that a full disclosure has been made accurately and in good faith, an acceptance acknowledgement letter will be sent within a couple of weeks. If any further action needs to be taken, you will also be informed (usually in writing) at this point.

If however, HMRC decides it will not accept your disclosure, usually because they believe the mistake to be grossly negligent, they will again formally contact you explain why and what further action they may take.

It is also worth remembering that if HMRC deem the disclosure to be substantially incorrect, they can and probably will seek far higher penalties. For this reason alone, it’s well worth you being completely honest all the way through and getting it right first time.

In essence most of this Blog is common sense, if you’ve made a mistake with your taxes, it is likely that HMRC will eventually find out. The consequences of this are significant, with much higher penalties and compound statutory interest from when the tax should have been paid. So, if you realise you’ve made an error go to: https://www.gov.uk/government/publications/hm-revenue-and-customs-disclosure-service or contact your accountant immediately!

In compiling this Blog, I am indebted to those nice people at Tax Cloud.