Gift Aid is not as simple as you may think! 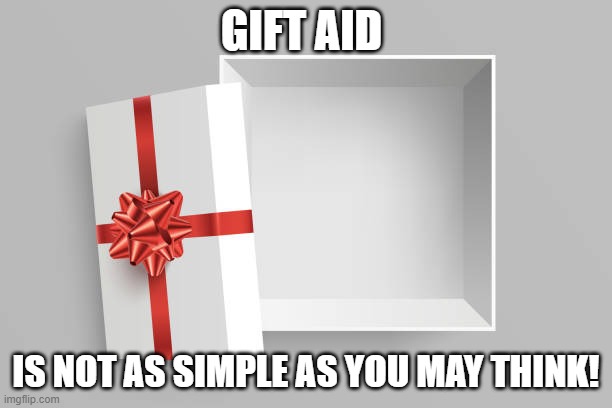 The Give Aid rules are designed to encourage taxpayers to be more generous but are dotted with conditions and potential snags for both charities and donors. So how do you avoid making a mistake?

If the donor is a higher or additional rate taxpayer, the extra relief due can be claimed via his/her tax return or via their PAYE code. Where donations are from joint bank accounts, care should be taken to determine the identity of the donor. Joint donations should be accompanied by joint Gift Aid declarations but take extra care if the donors pay tax at different rates.

In providing details of donations, the taxpayer may incorrectly treat all payments to charities as qualifying gifts, however confusion can arise when membership of organisations such as the National Trust qualify for relief, whereas others don’t. Preparation of correct claims in returns therefore needs to be carefully checked.

Taxpayers making donations to charities can claim Gift Aid relief if any benefit they receive in return is minor. A visit to a heritage property does not prevent relief provided that the amount paid is at least 10% more than the published admission price, or admission is allowed for at least 12 months during public opening hours. This enables charities such as the National Trust to allow access to their properties to members while treating the membership fee as qualifying for Gift Aid relief.

The viewing of old properties, artwork and the like, does not exclude tax relief, but the use of facilities, unless the use is very minor, does.  This allows tax relief on National Trust, English Heritage memberships and similar organisations. However, membership fees for a charitable sports club, such as a village tennis club for example, do not qualify for relief if access to training or games is allowed. The level of subscription is often an indication as to whether the payment is support for a charitable sports club or essentially designed to give access to facilities such as the tennis courts.

It is also worth remembering that taxpayers can claim relief for their own membership fees, but not memberships given as gifts to others. The payment is regarded as a gift to the other member, and not a gift to the charity, so relief cannot be claimed. An exception is allowed for the membership of certain organisations such as the Brownies, Cubs, Boys’ Brigade or Scouts. An adult can claim relief under Gift Aid for a child’s membership but not for fees such as for trips or camps.

Double-counting can occur if a taxpayer makes donations through an account with the Charities Aid Foundation (CAF). Tax relief can be claimed on donations to accounts such as with CAF who then claim the basic rate tax suffered by the donor. If the donor typically makes gifts to charities and appeals from their CAF funds, payments are from “gross” income, therefore further relief cannot be claimed under Gift Aid on the donor’s payments from the CAF account to the charity.

Sometimes, a taxpayer cannot claim relief for subscriptions to learned societies against PAYE income, usually because the society is not on HMRC’s list of approved bodies. This is also the case if the taxpayer has retired and can no longer claim the subscription as “wholly, necessarily and exclusively” in connection with an employment.

Many of the professional bodies are registered charities, so relief can usually be obtained by paying membership fees as Gift Aid payments. The body’s membership officer will be able to confirm this with the taxpayer, and if you haven’t claim Gift Aid before, it may be possible to backdate the claim.

I am personally a regular charity donor and can assure you that the process by which gift aid is collected is relatively simple, but as you will have already read, there are one or two pitfalls. So, if you are concerned over any aspect my suggestions is to contact the charity direct, as they’ve invariably got a very helpful and knowledgeable expert in the office who will talk you through it.

Alternatively, you can look for guidance from HMRC by going to: