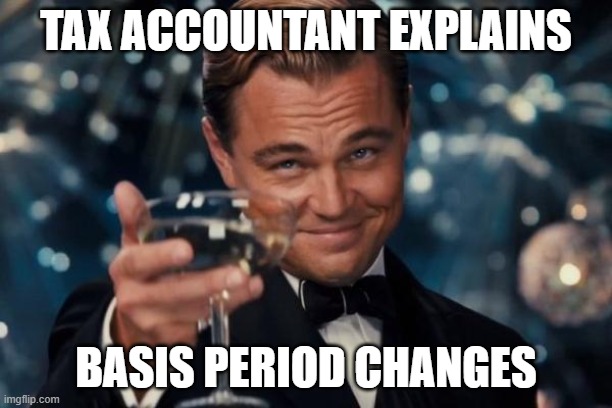 This week I’m looking at how HMRC changes to the tax basis period will affect self-employed traders and partners in trading partnerships; but I suspect that many of you reading this Blog will not have the foggiest of what the term ‘basis period’ actually means.

Specific rules determine the basis period in certain cases, including during the early years of trading. These rules can create overlapping basis periods, which charge tax on profits twice and generate corresponding ‘overlap relief’ which is usually given on cessation of the business. Overall, this basis of taxation is called the ‘current year basis’.

HMRC has sent out a consultation paper, to the main accountancy and tax bodies, asking for views on how sole traders and partnerships should amend any figures reported for tax years prior to 2024/25. The switch to the tax year basis will seriously inconvenience small businesses that don’t use a 31st March or 5th April year end. Those businesses will have to apportion accounts figures from two accounting periods to complete their finalisation statement (the replacement for tax return) under Making Tax Digital (MTD).

In view of the proposed earlier filing dates under MTD, the actual accounts may not have been finalised by the deadline for submitting the finalisation statement which is scheduled to be the 31st January after the tax year end. As a result, provisional figures will need to be included. Those estimates will then have to be corrected to actual amounts at a later date.

This will inevitably lead to extra costs as each finalisation statement will have to be “finalised” twice. This will also have knock-on effects for the accuracy of tax paid by 31st January which will be based on estimated figures, giving rise to the spectre of penalties for inaccuracies, plus interest for any late paid tax.

HMRC estimates that around 400,000 sole-trader and partnership businesses use an accounting period that is not aligned with the tax year. All of these businesses will have to adjust their reported accounts figures for each and every year from 2024/25 onwards. This is an unnecessary and on-going cost, which achieves no benefit at all for the business and no obvious benefit for HMRC, other than possibly accelerating payment of some tax. However, it also carries greater risks of inaccuracies and underpayments.

There are two simple solutions that HMRC could use to avoid the small businesses affected by the proposed changes, having to incur these unnecessary costs. These are:-

Whilst I can understand HMRC wanting to change the present system, what they are proposing is unnecessarily complex and will not result in any additional tax. It will, however, incur significant extra costs for small businesses.

In my opinion they should implement one of my two above suggestions, with both having the advantage of incurring very little costs and then only for only the year of alignment.; plus, both are easy to understand and implement, which will of course mean that HMRC will probably reject them!