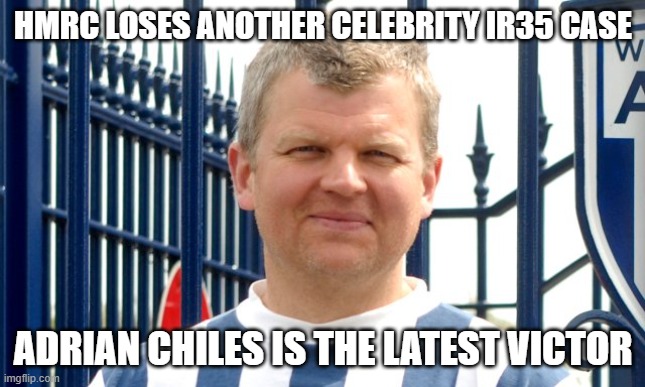 HMRC just cannot accept that their interpretation of the rules governing IR35, is not what the law actually says, as has been evidenced by a flurry of court decisions in recent weeks.

First, we had Lorraine Kelly, best known for her eponymous programme on ITV Lorraine, quickly followed by Scottish TV presenter and journalist, Kaye Adams, best known for being an anchor on ITV’s topical discussion show Loose Women and the daily morning show The Wright Stuff, with both presenters having resounding victories against HMRC tax determinations.

But today, I am focussing on the latest high-profile case to hits the buffers for HMRC, that of Sports presenter and TV & Radio host Adrian Chiles.

Adrian Chiles started working for the BBC as a journalist in 1992, but in 1996 the BBC required him to cease his employment and continue providing those services through what has become known as a personal service company, so Mr Chiles set up Basic Broadcasting Ltd (BBL) for that purpose.

During the tax years covering 6th April 2012 to 5th April 2017, BBL provided Chiles’s services under two ITV contracts and three BBC contracts in addition to other work for other parties. However, HMRC decided that the broadcaster was not a subcontractor but an employee of both the BBC and ITV and issued tax determinations for those years totalling a whopping £1,710,172.

When the IR35 legislation comes into play, the tax tribunal is required to consider the hypothetical contract, in this case, between BBL and the BBC and ITV. The question before the tribunal was whether the services provided by Chiles were provided under contracts directly between ITV/BBC and Adrian Chiles, and if so, would he be regarded for income tax purposes as an employee of ITV/BBC?

In November 2021, BBL applied for disclosure of material in relation to IR35 decisions concerning TV and radio presenters Paul Hawksbee and Kaye Adams were currently on appeal to the Upper Tribunal and the Court of Appeal respectively, but HMRC inexplicably refused.

The tribunal came to the opinion that there was some mutuality of obligations in relation to the contracts and that it appeared that Chiles would be performing his services as an employee. However, whilst the tribunal found that the broadcasters did have a large measure of control, they did not consider the extent of the broadcasters’ control to be sufficient to be a compelling factor.

In the tribunal’s view, the most significant factor that might displace the prima facie case that Chiles was an employee is whether he was “in business on his own account”. This is the same approach taken by the Upper Tribunal in the Kaye Adams and other cases. It involves a value judgment and will depend on various factors which will carry different weight in the overall analysis.

The tribunal agreed that for all other work Chiles undertook he was in business on his own account, based on the number of clients he worked for and commercial projects he took on that did not bear fruit. Chiles also paid 15% of his income to his management company Avalon to advance his career and reputation.

Also, whilst the ITV and BBC contracts specifically prevented Chiles from providing a substitute, the tribunal thought that the absence of rights to provide a substitute does not indicate that these contracts were outside of Chiles’s established business activities because, if Chiles was absent, the programmes concerned were not broadcast.

Standing back and looking at the whole picture, the tribunal considered that the relationships with both the BBC and ITV, were not directly with Adrian Chiles as an individual but rather between them and BBL and thus the IR35 legislation did not apply.

This was a very thorough judgment for a first-tier case, but at this level, it does not set a precedent, only the upper or ‘appeal’ tribunal can do that.  However, whilst HMRC may appeal, in view of the fact that the tribunal partly relied on recent judgements at the Court of Appeal, they would be foolish to do so!

This case just highlights HMRC’s seeming obsession with taking high-profile individuals to court over this piece of dubious legislation. And even when they win, such as with Eamonn Holmes and radio presenter Paul Hawksbee, they do not gain much if any more income tax or NIC; this is because the individuals concerned are invariably employed by personal service companies who pay to HMRC pretty much the same amount as would have been the case if they were direct employees of say, the BBC.

So why oh why are HMRC bothering?