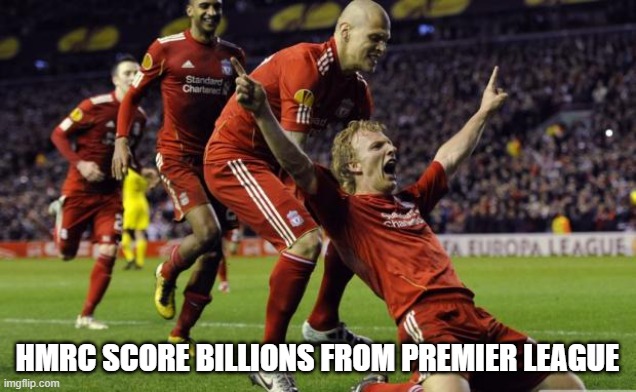 Big Four accountancy firm EY have just published a report into the finances of the Premier League (PL). It reveals that despite the financial turmoil triggered by the Coronavirus, Premier League football clubs paid HMRC a whopping £3.6bn in taxes in 2019/20.

The league and clubs’ ability to deliver significant economic activity through commercial relationships and supply chains has been highlighted by clubs spending a near record in January, with a total of £295m spent in transfers in the January window, compared with only £70m spent the previous year.

EY’s report reveals that PL players paid £1.4bn in tax in a season when play was suspended for more than three months due to the pandemic; with the clubs themselves handing over a further £2.2bn in VAT, NIC and Corporation Tax during the same period.

The total tax contribution underpinned by clubs has increased by £3.1bn since 1998/99, it said, while their economic activity has grown by 840%. The PL contributed £7.6bn to the UK economy during 2019/20, equal to pre-pandemic levels, despite an estimated £1.3bn loss in broadcast and matchday income in 2020/21 due to league matches being played behind closed doors.

The eye-catching figures demonstrate the league’s global earning power but are in stark contrast to the financial struggles of clubs outside the top-flight, for example, Derby County. The Championship side is currently in administration and desperately seeking funds to carry the club through the remainder of the season to allow a takeover to be completed.

The PL clubs have taken in £1.4bn in international broadcast revenues in 2019/20, and the League points out that they provide solidarity and parachute payments to 138 EFL and National League clubs amounting to £500m, with another £455m being distributed to other leagues and community football.

Rob Wilson, a football finance expert from Sheffield Hallam University, says the study “demonstrates the economic power that sport can have in regional economies and the social impact that the clubs have within their communities. Covid demonstrated the importance of this impact, not least through revenue reductions on match days, which disproportionately affects lower league clubs.”

Rob Wilson commented, “What this report shows is that the higher tax revenues are being generated, through standard taxation, PAYE, VAT et al, but also that additional tax revenues are generated through economic prosperity; with higher VAT returns from businesses serving match day crowds, for instance.” But he says the report doesn’t address the displacement affect. “If you are spending at football, you are not spending in shops, cinemas etc. The opportunity cost is also significant, and not measured here.”

University of Liverpool Management School football finance expert Kieran Maguire agrees, adding: “Where the Premier League does contribute is in sucking in money from overseas in the form of broadcast and commercial deals, also there is the additional taxation paid by international players. But just how much additional benefit is generated to the economy and the tax yield is far lower than the headline figures.”

Both Wilson and Maguire believe the Premier League and its clubs could do more to contribute to the UK economy. Wilson claims most of the clubs’ economic contribution is a by-product of matchdays, such as fans travelling for tourism purposes such as a stadium tour at Anfield or Old Trafford.

Many argue that clubs could make higher donations to community groups but that’s an unfair criticism. The reality is that clubs work with local businesses to ensure that there is a strong offer for matchday crowds; with most providing significant support for their community programmes to tackle inequality.

Maguire suggests that the football industry could generate more tax revenues for the economy if 100% of players’ remuneration was treated as employment earnings. At present in the PL, most players have image rights companies which take a proportion of their income. Instead of paying tax at 45% through PAYE, these companies pay 19% corporation tax on profits, with the player/fellow shareholders (most often family members) only paying tax if a salary or dividend is paid and then at a much lower rate than 45%. 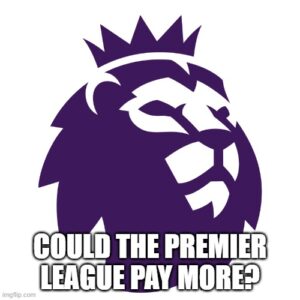 Chancellor Rishi Sunak welcomed EY’s report, saying it was “fantastic that the Premier League has contributed billions to the economy throughout the pandemic”. But is Mr Sunak ignoring the plight of clubs with less economic muscle than the PL, clubs such as Derby County for instance.

The truth is that many clubs outside the PL struggle for liquidity; their debts outweigh their revenue, and they consistently lose money. Clearly, this is not sustainable, and the case of Derby County highlights the fact that if a club goes down, it has a significant economic impact on the local community it serves.

I am an accountant who loves football, and the plight of Derby County demonstrates that professional football is split between the haves and the have nots, with most of the haves being in the Premier League.

The list of clubs that have gone bust is growing, in the last ten years alone Bury, Rushden & Diamonds, Chester City and Macclesfield Town have gone to the wall, with significant negative effects on their respective communities.

Whilst I welcome the large amounts of tax paid by the Premier League clubs, the football model in England clearly needs fixing, so any suggestions on a postcard please!

What happens when you cross the VAT threshold by Accident
Ken Dodd has the last laugh over HMRC
Coronavirus VAT deferment: Don’t delay