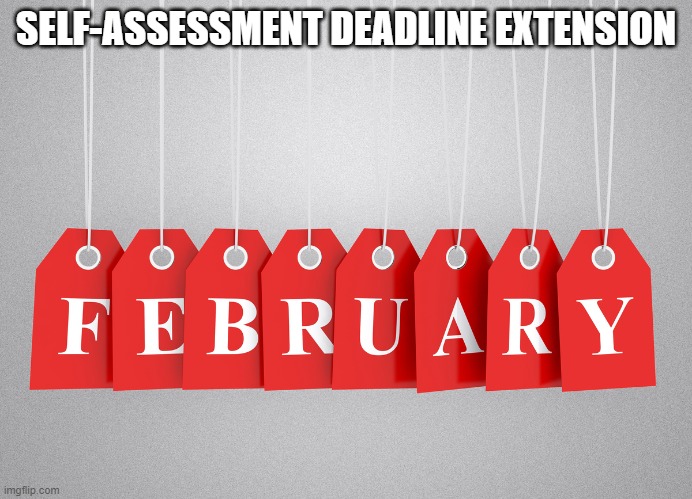 Taxpayers (and accountants) Given Breathing Space

For the second year running, HMRC is waiving late filing penalties on tax returns for one month as the Omicron variant continues to wreak havoc on accountants and their staff; and thus their ability to finalise and submit Self-Assessment Tax Returns by the 31st January deadline.

The tax office’s announcement comes much earlier than the same news last year when accountants were working up until 25th January under the assumption that the 31st January deadline was still intact.

HMRC’s announcement of an extra month to file your tax return without incurring a fine, did not say anything about interest accruing, but as last year saw many individuals not being charged, I’m hoping for the same again this year. Also, providing the Tax Return is filed by 28th February, you will have until 1st April to pay.

This welcome news comes as rising Covid cases have squeezed capacity levels of accountancy firms and taxpayers alike, with self-isolation rules and sickness causing a huge strain for many in meeting the 31st January deadline. HMRC however, is continuing to encourage accountants and taxpayers to file before the 31 January deadline and confirming that they have the right to charge interest from 1st February.

Lucy Frazier, the permanent secretary to the Treasury, said the late filing penalty waiver will give millions of people “more breathing space to manage their tax affairs” as “Omicron is putting people under pressure.” “Waiving late filing and payment penalties will help ease financial burdens and protect livelihoods as we navigate the months ahead,” she added.

Angela MacDonald, HMRC’s deputy chief executive, struck a similar tone: “We know the pressures individuals and businesses are again facing this year, due to the impacts of Covid-19 and our decision to waive penalties for one month for Self-Assessment taxpayers, will give them extra time to meet their obligations without worrying about receiving a penalty.”

HMRC have revealed that as at 31st December, 6.5m taxpayers had already filed their tax returns, which leaves around 5.7m still to submit. This figure is slightly below the 6.6m figure from this time last year

Early signs are that the numbers are tracking at the same levels as previous years. Take Christmas Day for example; this year 2,828 returns were filed, which is very similar to the 2,700 taxpayers that filed on the same day in 2020.

In mid-December accountants began reporting to their professional bodies that they were struggling to keep on top of their self-assessment workload as the Omicron variant ripped through their staff. In my firm in the week before Christmas, around 50% of staff were off, either with covid or self-isolating. The need to quarantine hand delivered records three days before opening them, also exacerbated the situation.

As one Leeds based accountant complained last week; “Covid has had a severe impact on the delivery of information to us, coupled with HMRC’s current appalling service, I can only imagine that the government will concede that there are severe obstacles in the way of meeting the filing deadline of 31st January.”

The early announcement of penalty waivers for the 2020/21 is in stark contrast to last year, when HMRC had stood firm on the deadline despite a chorus of calls from the professional bodies to either extend the deadline or waive late-filing penalties.

HMRC response was King Canute like, by responding to every call for help by steadfastly defending the status quo, whilst promising to keep monitoring the situation. With 6 days to go and the waves lapping round his ankles HMRC chief Jim Harra finally accepted the situation staring him in the face and said, “it has become increasingly clear that some people will not be able to file their return by 31st January, so I’ll give taxpayers the breathing space they need to complete and file their returns”.

The early announcement of the deadline extension is of course a huge relief to many, especially small business operators, who are facing not only tax bills, but also huge increases in energy and council tax bills in the near future. This additional time will provide taxpayers and advisers alike with critical breathing space in these exceptional times.

Tax on Foreign Earnings: Who declares you or your accountant?
Coronavirus Business Update: Latest HMRC News
Charitable giving may be vatable