Work Christmas parties are allowed, but will you go? 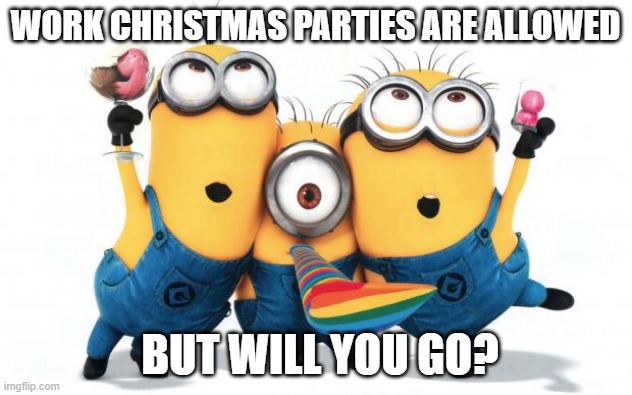 The pros and cons

The government might think holding Christmas parties is a good idea, but with the rise in Omicron cases, is the annual festive gathering really such a great idea this year?

The coronavirus pandemic has had a mischievous habit of making fools of us all. No sooner had the bulk of Brits decided that the threat was receding, especially with the booster jabs being rolled out, and started actively planning the Christmas party, then along comes the Omicron variant, forcing a rethink.

The government’s move to Plan B in England and a return to home working and Covid passes has thrown a spanner in the planning works of this year’s planned festive gatherings. Despite the ongoing 2020 Christmas party scandal, Boris Johnson has continued assuring everyone that festive work dos are still allowable under the new Plan B guidance.

Work Christmas Parties: Arguments for and against

Even before the advent of the pandemic, many businesses had begun looking at the pros and cons of holding Christmas parties. On one level, these are wonderful bonding exercises that can pay massive dividends in terms of cohesion and morale.

However, on the down side, they can be very costly, and not just in financial terms. They often lead to staff absence or underperformance in ensuing days and occasionally, often due to alcohol-fuelled excesses, they can lead to someone either killing their career progression stone dead by saying the wrong thing to the wrong person and in extreme cases, actually resulting in the person being sacked.

Work Christmas Parties: A need to get together with work colleagues

The prospect of a restaurant or hotel dinner had practically become de rigueur with most businesses, large and small, but these get-togethers were put on hold in 2020, with the country effectively locked down right through the Christmas period.

In November, most offices had reopened and staff, many of whom had worked from home for the last 18 months, were starting to attend the office for at least half of their working time. But most individuals, despite the joys of Zoom and its equivalents, found that they missed the face-to-face interaction with colleagues.

Indeed, most people realised that the team ethic had been of great value, and that it was virtually impossible to maintain it when you may not meet colleagues for weeks or even months. That made what would effectively be a reunion Christmas party a particularly attractive prospect.

The new coronavirus variant is clearly running out of control with something like 300,000 people catching the virus last week. However, analysis of the data now suggests cases could be doubling at a rate of as little as 2.5 days at the moment, which could mean half a million cases a week unless the current ‘third jab’ campaign works.

The medical experts are now saying that Omicron is a milder form of the disease and cautiously predicting that it is unlikely to lead to mass hospitalisation and a huge rise in the death toll. Nevertheless, because it is much more transmissible, a lot of people are likely to catch it and inevitably, some will die.

Despite the gloomy news, our PM and his cronies are positively encouraging people to hold and attend Christmas parties, even if they were not planning to do so in the first place.  Why you might ask; it is now clear that the somewhat facile underlying rationale is a desperate attempt to protect the hospitality industry, at whatever cost, and has very little to do with the safety of you or your colleagues.

At my own office, the staff have opted to delay the annual ‘do’ until the New Year when things have hopefully improved. Personally, I’ve only received one Christmas party invitation so far and I’m in two minds whether or not to attend an event that could prove to be dangerous to my health.

For those that do still intend to indulge in a bonding exercise this Christmas, a number of simple precautions should be considered to limit the risk of creating a super spreader event:

I’ve recently had my booster jab, but I am most definitely not complacent and whilst it is my intention to meet up with a handful of colleagues for a beer or two before Christmas, we will be wearing masks until we’re sat down and we’re also going out early before the pub starts to really fill up.

Whatever you decide to do, I hope you have fun but also make sure to be careful.