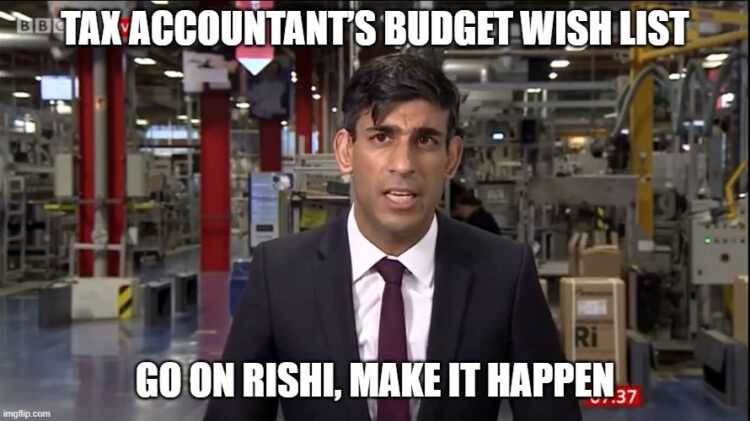 Rishi Sunak, complete with his little red box and a compulsory glass of whisky, will be standing up in the House of Commons on 27th October to deliver this year’s budget.

What will he say? No one outside of the Downing Street bubble has a clue, but given the havoc wrought by the pandemic and the vast array of emergency measures taken over the last 20 months, this is one of the most eagerly anticipated budget speeches for many a year.

So today I thought I would voice my thoughts, on what changes to the tax system the Chancellor should consider, I am not, however, suggesting a change in the rates of Income Tax (at least for now, that is!).

Many businesses have encountered cash flow problems since the pandemic, with customers in many sectors taking longer to pay their invoices. Smaller businesses are helped with their cash flow by the VAT cash accounting scheme, which means that VAT is not declared on a return until customers pay, rather than when a sales invoice is issued, which can be up to 3 months earlier.

I consider that the annual sales threshold for which a business can join and use the cash accounting scheme should, as a minimum, be at least doubled from the current £1.35m per annum and done so immediately. This will help around 100,000 SME businesses with their cash flow challenges.

Everyone agrees that VAT is a complicated tax, and it is vital to simplify it wherever possible. Most of the complications are as a result of our past need to comply with EU law. As we are no longer in the ‘Club’ surely now is the time for a root and branch simplification of the entire VAT system, especially the petty differences in what is liable at 20% as opposed to zero-rated.

As an example, an unheated pasty when bought from a butcher is zero-rated, but if sold as a takeaway (still unheated) by a catering establishment it is taxed at 20%, which makes no sense at all to the proverbial man-in-the-street.

Instead of tinkering around at the edges, my radical suggestion is that VAT should be reduced to a flat rate of 10% and the scope extended to cover most goods and services that are currently zero-rated or exempt. I would still retain some exemptions, such as medicines and medical equipment, but I would keep these to a minimum. The key advantages of such a move, apart from reducing the Civil Service by several thousand (perhaps they could retrain as HGV drivers or butchers); is that there would be far less incentive for a business to commit VAT fraud and the tax yield would actually increase. 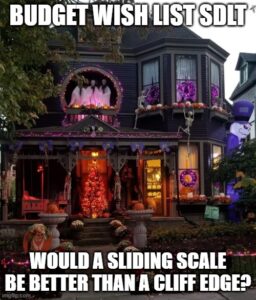 This wish would cause an uproar!

This tax applies to all property transactions in the UK, above a De Minimus level of £125,000 and varies between 2% and 12% on the full value of the property. My suggestion is that there should be a doubling of the De Minimus level to £250,000, which would mean that excluding London and the South East, most house sales in the ‘affordable’ category would be free of tax.

I would then have a sliding scale on all sales above this figure rising at 2% increments every £150k and ending with 20% on all property over £1.6M. This change would really help individuals at the lower end of the housing ladder and would mean that no one who pays up to £1M for a property would pay a penny more in tax, with most paying less. The overall tax yield would be approximately the same, but the owners of London mansions would pay considerably more, to the benefit of those at the bottom of the pile.

Finally, we have a Chancellor who calls a spade a spade and who has finally admitted publicly, what everyone knew privately, that NI is a tax and not a quasi-health insurance payment.

The temporary rise in NIC, to be replaced by the 1.25% Health and Social Care Levy in April 2022, is being introduced to support UK health and social care bodies. I hope Rishi has a rethink and scraps this ill-thought-out and hastily introduced measure in favour of a more radical overhaul of the National Insurance system and one which would produce greater levels of investment for the health & social care sector.

My solution is simple and would not involve individuals at the lower end of the pay scales paying a penny more. For a start I would reduce the Class1 rate from 12% to 10% and abolish the Self-employed Class 4 rate of 9%, so that everyone starts out on an equal footing at 10%. This would give some financial help to low earners of around £300pa.

I would then simply abolish the differential between lower and higher rate taxpayers, so someone earning a grand a week or more, who currently only pays 2% NIC on his or her higher earnings, would pay 10% NIC on all earnings above the Basic Rate Tax Threshold. I would also apply this measure in full to those over 65 still working.

This radical change would result in a lower tax for those at the bottom of the pile, raise far more tax than the 1.25% levy which in turn could properly fund the NHS & Social Care. It would also achieve the politically popular outcome of making those with the broadest financial shoulders, pay the most. A win-win scenario I do believe.

I do not expect my vision of a future simplified tax system to be universally popular, especially with high-earners, but I genuinely believe that it ticks most of the key boxes on taxation:

I commend this budget to you.

VAT Registration: How to go get a number quickly
The VATman can go back 20 years!
Coronavirus Economic Forecast