The true cost of the Olympics to GB plc 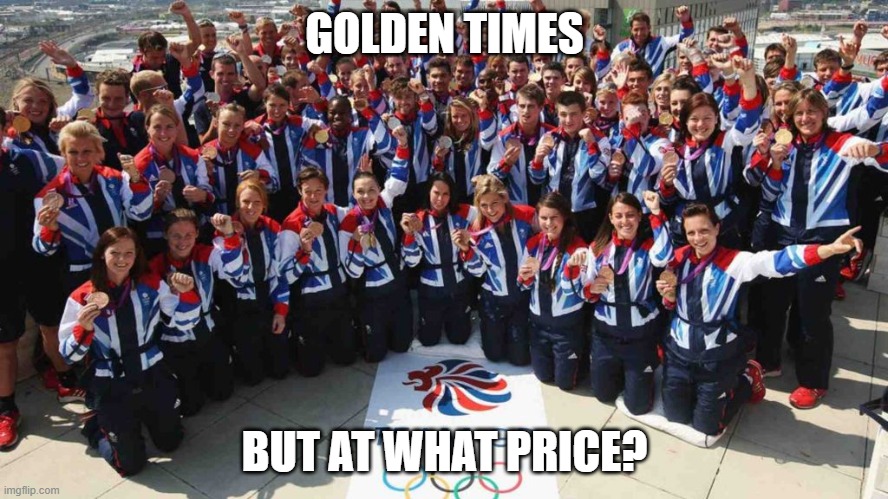 Until a few days ago, I had settled into a bit of a routine in the morning; once I’d started sipping my first coffee of the day, I would check the news on the Olympics and see how Team GB were doing. Nothing warms my cockles more than learning about gold medals by our boys, girls and kids in the Tokyo Olympics. Whether it be a gold in BMX or the triathlon, a gold is a gold.

As far as I am concerned, I’d still swell with pride if it was a medal in ‘British Bulldog’ if that was a sport at the games. Winning medals has become second nature to Team GB. London 2012 saw an impressive performance. In Rio 2016, Team GB became the first nation to excel its medal haul as a host nation at the Olympics; and this time around we matched our London tally of medals – truly amazing.

But I am old enough to remember earlier Olympic games; for example, take the 1996 Atlanta games, it was truly dreadful with one solitary gold medal and 36th in the rankings. But hey, I am only an armchair fan, the only way I could realistically come close to participating would be if the amount of coffee you could drink in a day became an Olympic sport.

There is no doubt that the success of Team GB at the Olympics has been significantly boosted by significant investment by the government, private sponsorship and lottery funding. Millions have been spent to make Team GB one of the most outstanding performers per capita of population. So, I thought it might be a good idea to add some perspective into the medal tally of Team GB. So, here’s a table to illustrate the point: –

It is no coincidence, that following the announcement at the Athens games that London had been awarded the 2012 games, funding dramatically increased. This immediately produced positive results; a significant rise in the medal tally followed and everyone cheered.

It is now time for a little perspective and as an accountant I’ve looked at the cost v value ratio analysis, with the following chart (drawn up by Management accountant Makbul Patel) making a sobering read:

Clearly, if team GB was a business, the increase in investment has resulted in a very modest effect on the bottom line. Using the Sydney Games as a benchmark, we can see that Team GB’s cost of each gold medal has increased substantially, with a Rio gold medal costing the nation double that of a Sydney gold medal.

London did improve on Beijing, but this is probably due to the ‘host nation’ effect, where Team GB had many factors to its advantage. It is all well and good Britain doing so well in the Olympics, but what are the downstream effects of all this funding, apart from bragging rights?

Did the feelgood factor translate into increased worker productivity or did the nation’s participation in sport show a sustained rise? Sadly, the answer is, whilst there was a short-term improvement, this quickly faded and the Nation resumed plodding along as before with the average Brit getting even fatter.

Clearly the link between the huge investment in the Olympics and the benefits at grassroots level appears to have broken down. So, you have to ask some searching questions, such as: Is the funding elitist and only targeted in sports and geographical areas where it will likely result in a medal?

Whilst I have been very active in a variety of sports, and still am at a more modest level, I am no expert. The health data on the nation continues to deteriorate and despite the great and the good urging youngsters to get involved with their local cricket, rugby, running etc club, the level of children’s participation in sport continues to decline, whilst their average waistline goes up!

And to cap it all, eighteen months ago we were hit with the coronavirus pandemic, which nearly brought the UK to its knees. Apart from the financial impact, sport virtually ceased overnight and whilst it is starting to emerge at the elite level, participation at the grass-roots level is the lowest in living memory.

Maybe I’m being too negative and getting my head in a spin over the economics of sport. The Olympics still has plenty going for it; they are a source of inspiration and a showcase for the ultimate in human sporting achievement. Maybe, just maybe, the trickle-down effect will happen this time. I really do hope so.