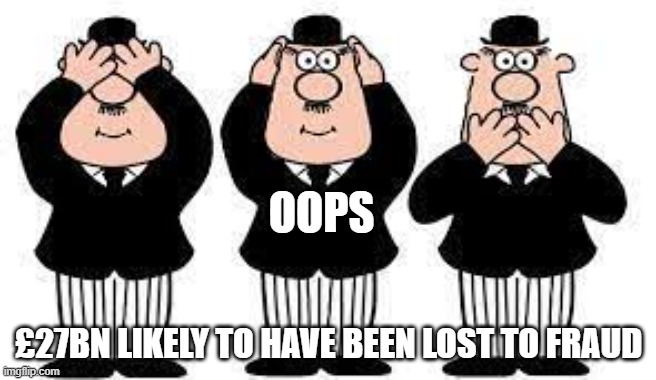 A disturbing report out this week by the cross-party Public Accounts Committee (PAC) has revealed how relaxed controls combined with the speed of the coronavirus financial support packages created a perfect storm for fraudsters, with an estimated minimum of £27bn likely to have been lost to fraud, just on bounce-back loans alone.

The true scale of how much pandemic aid has been swindled away, however, may never be known as HMRC does not have a handle on the statistics relating to false claims. In a report published today, the PAC said the government “significantly increased” taxpayer exposure to fraud and error by its twin decisions to drop basic fraud and error checks in paying out Covid loans, and to support people and businesses that it had no prior relationship with.

Trevor Wiles, partner at the Forensic Risk Alliance, the UK’s leading forensic accountants and risk assessors, commented: “Our experience of past government support schemes and bailouts, has demonstrated that numerous false or exaggerated claims are submitted. Compounding this, the Covid-19 pandemic created a perfect storm for fraud to proliferate.”

The £27bn coronavirus-linked sum is on top of around £50bn lost annually to criminals and through errors, according to government estimates, which counts for more than 40% of all reported crime in the UK. Banks were also slammed for their careless approach to dishing out the money as they “don’t have enough skin in the game” to be concerned about losses, the committee found.

Labour’s Rachel Reeves commented: “This report makes very uncomfortable reading, by which I mean as a taxpayer concerned about the way in which my taxes are being used by the government. I might disagree over the government’s spending priorities but I’m sure none of us are happy about over £50bn of taxes being lost to fraud or error on an annual basis.”

The Department for Business (BEIS) estimates the Bounce Back Loan Scheme (BBLS) could cost the taxpayer £27bn in losses because of fraud, with the 100% taxpayer guarantee leaving the department reliant on banks that it admits lack incentives to chase debts given it is not their money on the line.

“On top of the BBLS losses, the government knows that there have been many overclaims by individuals and businesses in the Furlough and self-employed (SEISS) schemes; and even worse, it knows that it’s losing over £26bn a year to fraud and error in the tax and benefits systems andt admits to another £25bn it can’t even detect,” said committee chairwoman Dame Meg Hillier MP. “That’s over £50bn worth of public services a year given away to fraudsters and by mistakes in payments – before the frightening losses racking up in our Covid-19 spending so far, and against the backdrop of a massive surge in need.”

The report found that 3 government departments responsible for dealing with most of the pandemic support, the BEIS, DWP and HMRC, failed to take the necessary steps to detect, pursue and recover billions of pounds in fraud and overpayments.

The government wanted to provide support as quickly as possible, and ignored many standard controls and processes, whilst many of their staff were working from home. Many claimants were clearly suffering, most through no fault of their own, so in their minds there was a ‘justification’ to submit claims, even if they knew that they might be incorrect or exaggerated.

Bounce Back Loan Scheme Fraud: No skin in the game

Although BEIS is working with the police on criminal sanctions for loan scheme fraud, it maintains it is up to the banks to follow usual recovery procedures in the first instance. “If BEIS is worried that 100% taxpayer loan guarantees mean the lending banks don’t have enough skin in the game, the Covid emergency masks a more worrying underlying approach to managing risk and taxpayers’ money”, said Dame Hillier.

The report also found that a rush to provide support to vulnerable businesses and individuals played straight into the fraudsters’ hands; with government officials slow to act despite being faced with numerous early red flags.

Bounce Back Loan Scheme Fraud: Can you believe the numbers?

The PAC report, which considers the total picture of fraud and errors within the UK public purse, found between April 2020 and March 2021 Universal Credit scams rose to an all-time high of £5.5bn, around 15% of total claims. It also estimated that around half of all bounce back loans, amounting to £27bn, may never be repaid due to fraud or credit risks.

The report refers to ongoing fraud and error costing the taxpayer around £50bn a year, around half of which was in the DWP and HMRC, but as these figures are based on assumptions by the Cabinet Office, It is very difficult to have any confidence in any of the numbers estimated by the various departments involved.

The report states there are around 16,000 counter-fraud professionals in the civil service, most of which are in the DWP and HMRC, but as Dame Hillier points out, “there must be some low hanging fruit in other government departments, which is being ignored. “Most worrying to me is that we are told that it is only optional rather than compulsory for government departments to consult the Cabinet Office’s counter fraud function (CFF), which is absurd and shows a complete lack of common sense.”

She also highlighted the fact that the BEIS did not consult the CFF when designing the Bounce Back Loan Scheme “despite the increased risk of fraud and error compared to its usual operations”. She continued, “I’m sure I am not alone in thinking that any counter fraud function within government should be mandatory for all government departments and that the higher the risk, the more important it is to consult, and one of the key messages throughout this report is a lack of coordination between government departments on issues relating to fraud and error.”

Whilst the furlough and SEIIS schemes were clearly not immune from fraud, both need a decent level of skill and knowledge to make a claim, especially because of the many modifications to its rules over time. However, Bounce Back Loans were very simple to claim online and were open to all shapes and sizes of business, with minimal affordability or background checks, so as the PAC committee pointed out it can come as no surprise to Boris and Rishi, when the final mindbogglingly huge bill lands on their doorstep.

New rules for the Job Support Schemes
Coronavirus: What help can self-employed workers get?
IS HMRC EXTRACTING THE URINE?