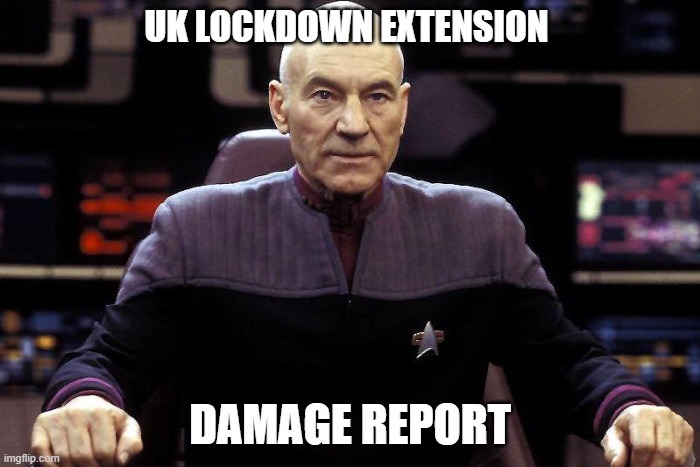 Lockdown extension will damage many businesses

The coronavirus lockdown has been extended for at least four weeks until 19th July, but the government has stated that it will not provide further support for businesses to navigate the final hurdle of restrictions. This has been heavily criticised by not only the businesses affected, but also by most industry experts.

The fourth ‘and final’ stage of the coronavirus lockdown proved to be a mirage for businesses last week as the government extended the restrictions for a further month but refused to commit any extra support for companies struggling to stay afloat.

A surge in cases of the Delta Covid variant, first detected in India, caused Prime Minister Boris Johnson to announce a “pause” of the re-opening, scheduled for 21st June, when virtually all of the constraints on the economy would be lifted. However, the government has indicated it will not extend the financial help on offer, despite multiple warnings that thousands of businesses are on the brink of collapse.

The UK’s aviation, retail and hospitality industries have been particularly hard hit by the lockdown, with more than £6bn in rent debt accrued and due to be repaid in two weeks by businesses that have been operating at a significantly reduced capacity – or sometimes not at all – for 15 months.

The Institute for Directors (IoD) said businesses face “a cliff edge” with a number of new significant costs in the immediate pipeline. On 23rd June quarterly rent is due, while on 30th June the ban on commercial rent evictions ends. The next day, employers must start contributing 10% towards furlough costs, and one month later on 1st July the 100% business rates relief tapers off to 67%.

“Clearly this is a blow for many businesses, particularly those in the retail and hospitality sectors,” said Dr Roger Barker, the IoD’s Director of Policy. “We are now approaching a cliff edge, with government support for business ending or beginning to taper off. It is vital that this support is pushed out commensurately with the lockdown extension. Economic support and public health measures must be aligned.”

Failure to maintain emergency economic support measures in line with public health restrictions could force many struggling businesses into bankruptcy and risk thousands of jobs. This is something that virtually all business experts are agreed upon.

“The news that the restrictions that were going to be lifted are now extended will come as a real shock to many businesses who will have taken the government at their word,” said Rick Smith, MD of insolvency specialists Forbes Burton. “Many hospitality businesses are simply not able to run at full capacity and may well be operating at a loss for now.”

Another month of such conditions will cause significant stress for businesses in the hardest-hit sectors, and there may not be any further scope for tightening their belts. The businesses that are subject to these last restrictions may have to prepare for more, as the proposed July date will be subject to a review, rather than a solid promise of easing.

“Whilst schemes like furlough and the reduction in business rates have reduced businesses’ fixed cost, these schemes are tapering off, at a time when businesses may need them most,” said Dr Maggie Cooper, of the Henley Business School. “This tapering means that businesses need to increase their revenue quickly to allow them to cover these costs.”

The delay in re-opening will be particularly hard for the hospitality sector as businesses that are open already will have been counting on being able to reduce social distancing and increase the number of customers that they can serve. Many businesses have spent money ordering food and drink and marketing events, incurring more variable costs that they now can’t recoup.

The hospitality industry has estimated that a four-week delay to the easing of restrictions, including the lifting of the cap on how many people can meet indoors, could cost struggling businesses £3bn and put 200,000 jobs at risk.

“Businesses need government support to tide them over what is hopefully the final hurdle – if support for the next month isn’t increased there is a chance that a significant number will fail after receiving support over the last year or so,” Dr Cooper said. “If businesses fail now due to a lack of support, unemployment, particularly in the hospitality sector, could increase significantly. High streets could also be hit hard at a time when we are already seeing an increase in the number of empty shops across the country.” 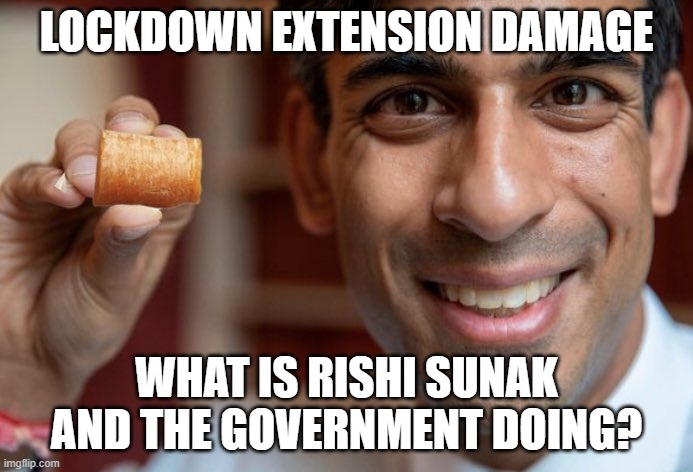 What is Rishi Sunak and the government doing?

Businesses can continue to access other support including business rates cuts, VAT cuts and our recovery loan scheme, the spokesperson said. “It’s a tough situation for many and one which will have made many adapt and change in unprecedented ways,” said Rick Smith. “Contingency planning and cash flow forecasting must be a priority.”

The delay will be particularly difficult for the UK’s millions of small firms, the Federation of Small Businesses (FSB) National Chair Mike Cherry said. “Many who have been unable to open are now faced with paying back their Bounce Back Loans,” he said. “Government should consider writing off spent Covid loans for the most restricted firms.”

He went on to say it was understandable that as the pandemic evolved “the goalposts will move too”, but firms hanging on to the cliff edge may not be able to survive without additional help. 19th July has to be the final date for the restrictions to be in place, he added. “Small firms need support now, they understand the need to take a cautious approach out of lockdown, but not at the sacrifice of businesses, jobs and livelihoods,” Mike Cherry said. “So, the government must act to prevent further economic casualties.”

After he’s spent billions propping up firms and employees over the last fifteen months, it would be almost criminal if Rishi now effectively forces businesses that have been directly impacted by the extension of the lockdown restrictions, into bankruptcy.

My message to the Chancellor is that it’s not businesses’ fault that virus cases have increased, so why don’t you ease the purse strings a fraction over the next few weeks, to save them.