HMRC’s dreadful service under the spotlight 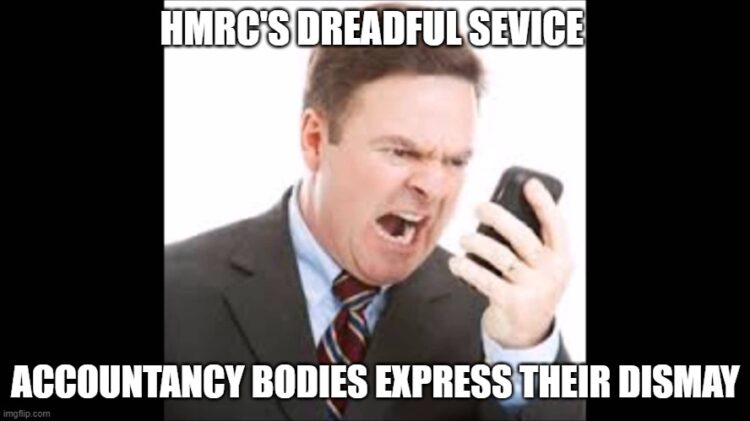 Tax payers’ assistance is under the spotlight

There has been no shortage of complaints about HMRC’s performance recently, both from accountants and ordinary taxpayers.

In March, the latest HMRC cock-up hit the fan, this time involving a mass data breach. The scandal saw thousands of accountants receiving late filing penalty notices intended for clients of other accountants, mistakenly sent out due to yet another software failure.

This major error got me thinking about HMRC’s overall poor performance in recent months, most of which cannot be laid at the door of the Coronavirus crisis. Anecdotally, most of my accounting colleagues have now pretty much lost faith in the system, with taxpayers and businesses, not far behind.

HMRC’s Dreadful Service: What are the issues?

All the major accountancy bodies have expressed their frustrations recently, with the Institute of Chartered Accountants recently publishing a catalogue of complaints about HMRC “poor service levels”. The Institute highlighted three key issues:

As having a VAT number is mandatory because of Brexit, if your business imports or exports, this means than some firms have been unable to do either this year. Six months for R&D relief claims to be processed, 8 months for corporation tax losses to be actioned and extended delays in ordinary taxpayers getting refunds of overpaid tax because of PAYE coding errors.

Whilst all accountancy bodies have expressed sympathy for HMRC in dealing with the many challenges faced during the course of the pandemic; they have also offered their support to the tax authority to bring forward a clear recovery plan. This of course requires HMRC to consult with professional bodies to enable improvements to service levels, something that thusfar HMRC have regrettably failed to do.

In my opinion, none of HMRC’s failures are directly to do with Covid-19, as they’ve been occurring for years; but what the coronavirus has demonstrated is what can happen to an already broken system, which when it has a significant hit, starts developing bigger and bigger cracks before collapsing in a heap.

Covid-19 has provided the ultimate excuse for poor customer service to get even worse across much of the public sector and indeed through other industries, such as banking. When Matt Hancock recently said on the Andrew Marr Show that, “We’re going to have to live with a modest level of coronavirus indefinitely”, I sincerely hope that this doesn’t also apply to HMRC’s level of service.

HMRC’s Dreadful Service:  What are the priorities to fix?

For a start, it is vital that the accountants’ dedicated phone line (ADL) is restored, when you do manage to get through to HMRC, their individual staff are good and helpful people and who generally sympathise with the caller that “it’s a shame that the ADL has gone” and often helpfully suggest that you write a letter instead. Unfortunately, there is currently a minimum of 75 days delay between receiving a letter and an HMRC official looking at it, let alone actioning it.

Secondly, HMRC really do need to sort out their ongoing software issues, which have been to say the least, problematical since I was in short trousers! The penalty notice data breach nightmare is just the latest in a string of HMRC software failures; with a tax office spokesman saying; “We are sorry for some penalty notices being incorrectly addressed,” and went on to explain that they’d experienced a software issue linked to inadequate testing within their internal processes.

Accountants, taxpayers, politicians, businessmen and women et al, have for years bemoaned the fact that HMRC seem utterly incapable of installing and operating an efficient tax software system, so I have a message for Jim Harra, head of HMRC: So, fix it, Dear Jimmy, fix it!  (My apologies to Harry Belafonte for paraphrasing his classic children’s song, ‘There’s a Hole in My Bucket’.