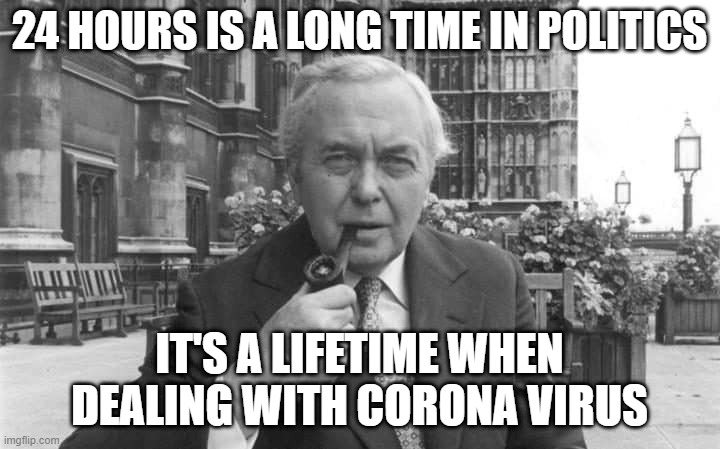 Harold Wilson was absolutely spot on when in 1964 he famously said, “24 hours is a long time in politics.”

If you read my Blog last Friday on the introduction of the Job Support Scheme (JSS), it would have been reasonable of you to assume that the Chancellor would not be making any further major announcements in the near future.

However, fast forward a day and there he was flanking Boris at the press conference on Saturday night telling us that he was continuing with the furlough scheme for another 4 weeks with the new JSS being put on hold until at least 2nd December 2020, the date that the latest lockdown is scheduled to end.

And then, just when I thought that was it, Rishi Sunak on Thursday announced changes to the scheme announced less than a week earlier, plus he added some additional support measures.

So, what did Rishi announce over the last week?

The coronavirus job support scheme (CJRS), known to most people as the furlough scheme, will now continue until the end of March 2021 with grants covering 80% of wages. Implementation of the two JSS schemes will be delayed until 1st April 2021, assuming, of course, they’re not scrapped.

Mr Sunak said that he had decided to reinstate the furlough scheme with the same conditions as applied in August 2020. The CJRS grant will pay for 80% of the employee’s current wages for time not worked, up to £2,500 per month. The employer must still pay any NIC due and any contracted employer’s workplace pension contributions.

And of course, the employer can top-up the employee’s furlough pay at their own expense, if they wish to.

Also, as part of the revised scheme, anyone who was made redundant after 23rd September can be rehired and put back on furlough.

What changes are there in eligibility?

Employees on any type of contract can qualify, including zero-hours, contractors and sole-directors, but there are likely to be difficulties over determining the reference pay to use and the usual hours worked, particularly for the many sole-directors.

Yes, flexible furlough will be permitted alongside full-time furlough, so staff can be brought back part-time.  The same rules for flexible furlough will continue to apply as they have done since 1st July, so the employee may be furloughed for a few days or hours per week. It does not appear that the Chancellor will be setting a minimum time for furloughed hours or working hours. However, he has said that each furlough claim must be for a period of at least seven consecutive calendar days.

Which employers qualify and how do they claim?

The good news is that any employer with a UK bank account can claim support under the extended CJRS, there is no financial test to pass for larger employers as will apply under the postponed JSS scheme. Also, charities and not-for-profit organisations can also claim in respect of their employees.

The claim process will be very similar to that which has applied so far under CJRS, the employer will have to report the hours the employee has not worked in a claim period, and the usual hours. Claims can be made up to 14 days from the end of the pay period, and the CJRS grant should be paid within six days of the claim being submitted.

What about the self-employed?

I’m pleased to inform you that there will be increased support for the self-employed; through the Self-Employment Income Support Scheme (SEISS). The next SEISS grant will be based on 80% of average profits, up to a maximum of £7,500 and applications for these grants will open on 30th November.

A subsequent, or fourth grant, will cover a three-month period from the start of February 2021 until the end of April, with terms to be confirmed later.

Also, as with the previous SEISS scheme, HMRC will contact those who are eligible directly.

Unfortunately, a raft of individuals will remain ineligible for help, including the newly self-employed, those whose pay themselves in dividends, freelancers, and sole traders who previously had a trading profit of more than £50,000.

What other help is available?

Where businesses have been required by law to close, they will be able to apply for a support grant from their local authority, with each grant being based on the rateable value (RV) of their business premises and paid every two weeks.

Also, the mortgage holiday scheme, which was due to close on 31st October, will now remain open for borrowers who have been impacted by coronavirus.

And finally, businesses will continue to be able to apply to banks for government-backed support loans until 31st January, compared with the previously announced 30th November deadline. Also, after the 12-month interest-free period, the interest rate will be subsidised for loans that don’t exceed 10 years.

Is there anything else?

Not at the moment, but after the original changes were published on Monday, several MP’s requested that more help be given to a number of sectors, particularly the self-employed, and low and behold on Thursday Rishi had a rethink and decided to be more generous.

I cannot believe that there will be any further significant changes, but I have been surprised already this week and will not be amazed, if a few additional tweaks aren’t made in the coming few days.