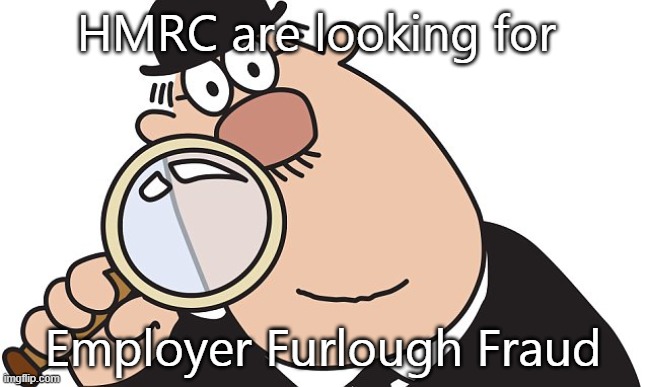 HMRC is writing to selected employers, asking them to review their CJRS claims for furloughed employees. However, the letters do not specify what is wrong with the claim, or even which month’s claim HMRC has an issue with.

HMRC believes up to 10% of CJRS grants contain mistakes or have been illegally claimed, in other words, were fraudulent. HMRC’s Jim Harra, speaking to the Public Accounts Committee, estimated the value of CJRS fraud or error to be potentially as high as £3.5bn.

In reality, there are likely to be a large number of very small errors spread across many claims, as the furlough pay calculations presented a steep learning curve for payroll staff and accountants. For example, the confusion about holiday pay and entitlement was widespread as HMRC had changed the basis of calculation on 6th April this year, so it is unsurprising that mistakes have been made.

HMRC has said it will focus on fraudulent claims and not on cases where the employer has made an innocent error. It has identified 27,000 CJRS claims where something looks wrong, and it is initially enquiring into 11,000 of those claims.

CJRS Claims: What does the letter say?

The HMRC compliance letter says the employer’s CJRS claim appears to be incorrect because, for example, ineligible employees were included, or too much was claimed for some other reason. No details are given of how much the overclaim may be or who the potential ineligible employees are; nor does it specify which CJRS claim the employer has submitted that is suspected of being incorrect.

To find out where the error may lie the employer or their accountant will have to trawl through the details of every CJRS claim submitted from April to August, looking for the one or two potentially ineligible employees, and double-check every single furlough calculation; which is potentially a mammoth task.

CJRS Claims: What is triggering the letters?

The most likely trigger for these letters could be that the employer was including employees on furlough who were not paid through that PAYE scheme in February or March 2020, but who do qualify as they fall into one of the following exceptions:

It is highly likely that the four exceptions highlighted above,  may not have been picked up by the HMRC computer when it compares the payroll details the employer submitted in March 2020 to the list of employees on furlough for say July.

They are also likely to have selected a number of employers at random; if this happens to you and you’ve done nothing wrong and have not made an error; you will still need to respond to their letter.

CJRS Claims: What should you do?

The compliance letter asks employers to initially respond to HMRC by telephone if they think the CJRS claim was correct. However, as a number of our clients have reported, it can take some considerable time for HMRC to answer the call.

Once the call is answered, and the employer passes the security questions they are told that an HMRC officer will be assigned to the case, but the system for processing the CJRS investigations won’t be ready for some weeks. This directly contradicts the letter which says that if a reply is not forthcoming by 22nd September HMRC will open a potential fraud investigation which could trigger significant penalties.

CJRS Claims: What happens if there is an overclaim?

If you are the employer and believe that one or more of your CJRS claims may have been incorrect, you are asked to reply by email, and then instructions will be given to make a formal disclosure. This however is rather premature, as there is still time to make a voluntary correction of earlier CJRS claims.

No penalty will be applied for errors in CJRS claims if the excess grant is corrected within the later of: 90 days from the receipt of the grant, or 20th October 2020. There are also no penalties for submitting an inaccurate CJRS claim which resulted in a grant that was lower than the employer was entitled to.

The letter states that a copy of the CJRS compliance letter has been sent to their accountant, but my experience is that this system only works intermittently. So, make sure you send him or her a copy of the letter you receive, or simply pick up the phone.