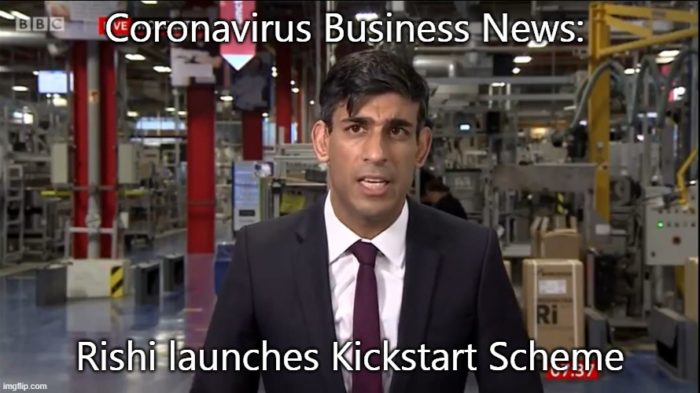 Is the Kickstart scheme fit for small employers?

Last week Chancellor Rishi Sunak launched the Kickstart scheme, but is it fit for purpose, especially for small employers?

With coronavirus ravaging the job market and large-scale redundancies continuing to be announced daily by employers, Rishi Sunak’s Summer Statement pledge to offer job placements for young people has finally been unveiled.

Businesses are now able to sign up to the £2bn scheme and offer young people aged 16-24 a six-month work placement. However, employers can only use the plan to provide jobs to youngsters currently on universal credit.

In the Summer Statement, Sunak said the Kickstarter grants will be around £6,500 per new employee and are for designed so that employers can create jobs for those ‘at risk of long-term unemployment’. The grant covers 100% of the age-relevant National Minimum Wage, national insurance and pension costs for 25 hours a week. Also, employers looking for funding must create a minimum of 30 job placements.

The Department for Work and Pensions (DWP) will choose the applicants for the jobs, and youngsters will be referred into the roles through their JobCentre Plus work coach. The government expects the first Kickstarter to begin at the start of November.

When the Chancellor announced the Kickstart scheme back at the Summer Statement, he strongly urged every employer, “big or small, national or local” to hire as many Kickstarters as possible. The added caveat that employers must offer a minimum of 30 job placements, unfortunately, restricts the scheme to the larger employers. As an example, Rishi has praised supermarket giant Tesco for already stating that it will take on at least 1,000 young people under the scheme over the coming months.

However, the only option for smaller businesses that have fewer than 30 job placements is to partner with another organisation, such as a Local Authority, Chamber of Commerce or a registered charity. The intermediary will then make a combined bid for several businesses.

Alternatively, employers can also join forces with others in the same business park or shopping centre and nominate a representative to submit the application, and if you’re the representative applying on behalf of a group of employers, you’ll receive £300 of funding to support you with the administrative costs of bringing these employees together.

During this application process, employers will be asked to show that the job placements are new jobs and detail how it will develop basic skills and employability for long-term work. This requirement fulfils Sunak’s Summer Statement promise that the positions will be “good quality jobs” that will provide “Kickstarters with training and support to find a permanent job”.

With the furlough scheme winding down in October and redundancies becoming a reality for many businesses, the Kickstart scheme is not designed to be a band-aid. The guidance highlights that the job placements must be new jobs and would not cause existing employees or contractors to lose their job or have their hours reduced.

The guidance also hints that once the scheme has started, the DWP will check that any firm taking on several Kickstarters, cannot have made significant numbers redundant in the preceding months.

Kickstart Scheme: How employers get paid

The Kickstart grant will be paid in arrears after the individuals’ pay has been reported through the employers’ monthly RTI PAYE report to HMRC. In addition to the Kickstarter grant, employers will also receive an initial £1,500 set up cost once the young person has started.

This setup cost will cover any support and training for the placement. It would also help pay for uniforms or anything else needed as part of the induction, with employers receiving the grant once the young person has been enrolled on their payroll and is being paid through PAYE.

The Chancellor said he was driven by the need to not “lose this generation”, with the Kickstart scheme being one of his plans to protect jobs. The package to support young people to find jobs also includes a £2,000 payment to employers for every apprentice hired under the age of 25 and an investment into the National Careers Service for bespoke advice on training and work.

Sunak said at the launch: “This isn’t just about kickstarting our country’s economy – it is an opportunity to kickstart the careers of thousands of young people who could otherwise be left behind as a result of the pandemic.”

Whilst being broadly welcomed, reaction to the scheme has focused negatively on the 30-placement minimum. The FSB called the requirement “a major barrier to entry for the majority of small businesses wanting to use the scheme”.

At MJ&Co we have already had several clients chomping at the bit since the July announcement, now feeling very let down. The offer of a paltry £300 for a small business owner to organise and provide admin for a disparate group of other small businesses is as pathetic as it is unrealistic.

On a personal note and as a long-time supporter of young people and their careers, it saddens me that this scheme won’t help them gain experience in small/independent businesses.

In his July statement, the Chancellor praised the hundreds of thousands of small businesses that typically employ less than a dozen staff as the economic backbone of the UK; it is therefore regrettable that this new measure leaves them out in the cold.