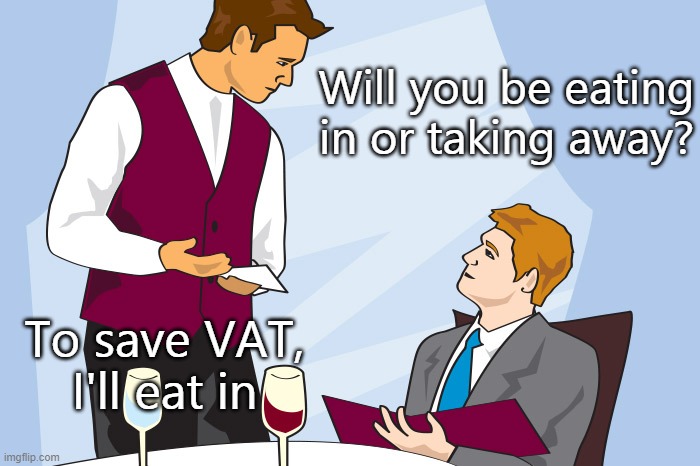 In last week’s Blog, I mentioned that this stimulus measure had been warmly welcomed by business. On the evidence of the first five weeks, it is most definitely helping the beleaguered hospitality sector.

Despite all these positive vibes, an increasing number of individuals and businesses have approached me for advice of exactly how the reduction should be implemented. When I looked closely at what Rishi Sunak’s had announced initially, I noticed that there were areas of conflict with the existing VAT rules.

For example: Under the existing rules, a packet of crisps is liable to 20% VAT, whether consumed on the premises or taken away. However, the new rules suggest that crisps are only liable at 20% if eaten on the premises because as they’re not hot, they fall under in the cold food takeaway rate of Zero VAT.

The HMRC website was as much use as a chocolate fireguard and their helpline wasn’t much better, other than to say further guidance would be issued in due course, but they had no idea when!

Then, lo and behold, in my inbox this morning was a message from HMRC with an attachment that finally provided me with detailed guidance on what to do. So, having read it a couple of times and chatted it through with my colleagues, here is my advice on what to do or not do regarding the 5% rate, now called ‘the hospitality rate’ by HMRC.

The basic rules for food & drink sales by pubs, restaurants, hotels etcetera, appear straightforward and have most certainly clarified the VAT rate for a packet of crisps (see the example below):

In this example, I will consider the takeaway sale of a bottle of beer, a café latte, a cheese sandwich, an ice cream, a packet of crisps and a hot pasty and whether there is any difference between the same package of goodies being sold inside the pub or restaurant.

Five of the six items sold inside the pub will be subject to 5% VAT – ie everything except the bottle of beer which is excluded (unless it is alcohol-free beer).

The sandwich qualifies for zero-rating as cold takeaway food, as has always been the case.

The first thing to consider is the definition of an ‘attraction’; several clients have asked me whether or not admission to a sporting event would come within this definition. Unfortunately, the answer is no, as HMRC have specifically excluded sporting events.

However, the good news is that the list where the 5% rate applies on admission fees is bigger than might be expected: shows, theatres, circuses, fairs, amusement parks, concerts, museums, zoos, cinemas, exhibitions and similar cultural events and facilities.

The 5% VAT hospitality rate applies to accommodation supplied by hotels and similar venues, along with caravan parks and campsites. But many venues take deposits or prepayments from customers, sometimes many months in advance and have already accounted for 20% VAT on the monies received.

The new rules have clarified this point and HMRC now advise that if a hotel deposit is received before the rate change but where the stay takes place afterwards, the deposit can be retrospectively subject to 5% VAT but at the discretion of the business owner.

Also, if you’re thinking of holidaying in the UK next year, there is the potential of a 15% bonus to be had! If you pay for your accommodation/food in advance and do so by the 12th January 2021 – the date the 5% rate stops, then you will only pay the 5% rate, which could be a significant saving for a family.

To my surprise, the new guidance also confirms that the relevant flat rate percentages for categories covered by the reduced rate will be adjusted temporarily.

The three most relevant categories will be ‘catering services, including restaurants and takeaways’ at 12.5%, ‘hotel or accommodation’ at 10.5% and ‘Pubs’ at 6.5%. I don’t, however, anticipate many pubs being affected as most have an annual turnover above the FRS threshold of £150,000 so rarely use the scheme. Unfortunately, as at today’s date, HMRC has yet to publish the new lower percentages. 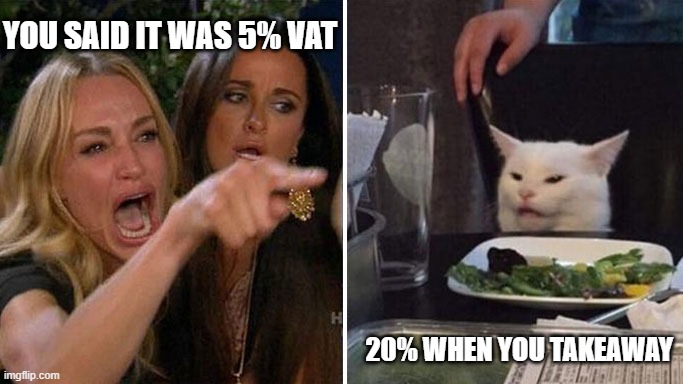 The VAT guidance on admission charges helpfully gives some examples of supplies where more than one rate of VAT applies, usually 20% and 5%. One of the examples confirms the admission fee for a brewery tour will be subject to 5% VAT, even if the fee includes some food and drink as part of the tour – i.e. the food and drink is ‘incidental’ to the tour. But if eating and drinking were the main priority, any alcoholic beverages would all be subject to 20% VAT and the food at 5%.

The keywording is as follows: “It is the responsibility of each taxpayer to demonstrate that its supplies are eligible for the temporary reduced rate.” This is a significant sentence: it recognises that there will be grey areas. Still, as long as a sensible and reasonable approach is adopted to each practical situation, HMRC will hopefully accept the calculations made by business owners to work out how much VAT is due as they are also aware that mixed supplies are always a bit of a minefield.

Until this guidance was issued, I had many concerns about how the new rules would work. I was trying to give advice whilst navigating the new road with all the confidence of a blindfolded cyclist after several pints. Thank goodness, the fog has now largely lifted, and business owners can move forward knowing clearly what the rules are.

HMRC has also confirmed that it is entirely up to the business owner on whether or not to pass on the VAT saving to their customers. Anecdotally, virtually all are planning to retain the windfall, basically because the social distancing rules mean that the vast majority of premises will have to operate with a significant reduction in covers, whilst costs remain pretty much as they were.