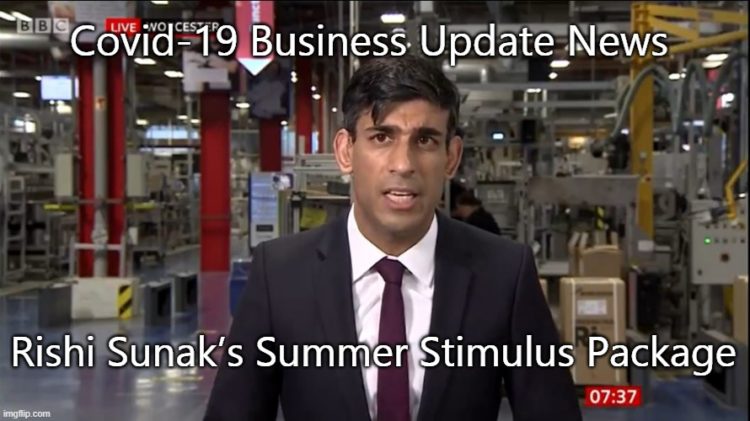 We all knew that the Chancellor was calculating a stimulus package to boost the UK economy and save jobs, but what we got on Wednesday was more than most predicted.

The Chancellor is planning a hefty chunk of spending to try to prop up the economy, specifically to try to keep millions of people from joining the dole. So, what are the key points of what is effectively a coronavirus budget:

Once the current furlough scheme finishes at the end of October, it had been likely that many employers would have made a significant proportion of their workforce redundant. So, to help prevent this a one-off £1000 payment will be available to all employers for every furloughed employee that they retain until at least the end of January 2021.

To be eligible for the payment, workers must earn at least £520 per month, with the predicted overall cost estimated at up to £10bn.

Various rumours have been floating around in recent days regarding a cut in VAT, with most pundits predicting a temporary reduction of the current rate of VAT from 20% to 10%. But clever young Rishi once again surprised them by targeting an even bigger cut to the hospitality sector, arguably the area of business that’s suffered the most.

He has cut VAT from 20% to 5% for pubs, restaurants, hotels, and attractions for six months from 13th July to 12th January 2021. He has however excluded alcoholic drinks, with the selected areas covered being food and non-alcoholic drinks in restaurants, pubs and cafes, as well as hot takeaway food. The cut also covers accommodation in hotels and B&Bs and admission to attractions such as theme parks and cinemas.

With the housing market recently starting to stagnate, following a fall in prices, the Chancellor has decided to give the market a boost by cutting stamp duty immediately, with the benefit lasting until the end of the current tax year on 5th April.

Thus, the threshold for stamp duty on residential property (England and Northern Ireland only) will rise from £125,000 to £500,000. This will mean that approximately 90% of transactions will be tax-free as a result and is expected to cost around £4bn.

As part of the government’s commitment to reducing our carbon emissions, Rishi will subsidise projects to make homes more energy efficient in England. He will match anything a property owner spends (includes landlords) on qualifying improvements, such as loft insulation up to £5,000 per household. Plus, any low-income households can have up to £10,000, with the Treasury picking up the entire tab.

Help for young workers and the unemployed

This is the area that the Chancellor is clearly most concerned about and he has unveiled a raft of measures to increase the employment prospects of under 25-year-olds. The main areas of help are:

The final item on the list is my favourite and involves subsidising eating out, what’s not to like? Entitled “Eat out to help out”, the scheme offers a 50% discount for every diner, up to £10 a head, from Monday to Wednesday throughout August. The subsidy covers food and non-alcoholic drinks only and is available at any participating restaurants, pubs, cafes etcetera, with pretty much all such establishments expected to sign up. The restaurant operator is able to claim the discount in full from the government. via a simple online form.