Coronavirus: Pubs stumble down the road to recovery

After saying cheers the boys washed their hands

Whoopee doo, now that Boris has allowed pubs, bars and restaurants to reopen after over three months of closure, the fallout from the shutdown is starting to emerge. England’s many licensed venues, as well as the brewers and pub companies, had been staring financial ruin in the face. In the nick of time, the 4th July opening day has avoided the immediate prospect of permanent mass closures.

The vast majority of us Brits, have welcomed this eagerly anticipated news, albeit with a hint of caution. However, even though there are now ‘bums on seats’ once more, the restrictions mean that at best a venue can operate at is at a maximum of 70% of its pre-Covid capacity.

Pubs Reopening: What is the new normal?

The Prime Minister said, “caution will still be our watchword” and that the changes to lockdown rules would be “conditional and reversible.” He then outlined the rules under which pubs and restaurants can operate, which he dubbed ‘the new normal’. All venues will be expected to:

These measures will allow approximately 75% of pubs and restaurants to reopen but at some cost.

Pubs Reopening: What has been the damage so far?

The devastating impact of the UK lockdown on breweries and pubs was writ large in first-quarter financial results revealed by the trade association. Overall sales of beer were down 7.2% on Q1 2019 to 1.5bn pints, the lowest level for 20 years and that was after only 10 days of closure.

Big brewers are much better equipped to manage the shockwaves, but a June survey of 242 breweries by the Society of Independent Brewers (SIBA) paints a gloomy picture for smaller operators as they plan their financial survival. It revealed that 84% expect the pandemic and the one metre + social distancing measures to have a lasting negative impact on their business.

According to the SIBA survey, half of brewers believe the majority of pubs are not economically viable in the medium to long term with any social distancing, even one metre +. SIBA say that many pubs simply won’t reopen or will eventually go out of business if the government doesn’t relax the rules further.

Since pubs closed in March, whilst most of the larger breweries and chains have given rent concessions, to reopen every pub has had to buy PPE kit for their staff, as well as hand sanitiser gel, protective screens and Covid-19 signs for pub gardens and interiors.

Staff costs have also risen sharply, with drinks being delivered to the table in most cases, rather than collected from the bar. Also, every pub now has to have someone on the door to regulate numbers and take names and phone numbers for contact tracing. Then there is the capital cost of changing seating and provide outside shelters and heating for when the weather inevitably turns inclement.

Pubs Reopening: Is it the same pain for everyone?

No, is the quick answer. Independent pubs do not have the financial reserves of the bigger players, nor is it easy for them to diversify. The small high street traditional boozer may find it nigh on impossible to comply with the ‘new normal’ rules because of their size, with many lacking a beer garden.

The larger national brewers are likely to fare best with some increasing their market share as a result of the pandemic, they also have had the income from supplying supermarkets with canned and bottled beer, sales of which skyrocketed during the lockdown.

Is the government doing anything more to help?

Yes, the Chancellor has announced some measures to help, which I covered in last weeks Blog, ‘Coronavirus: Rishi Sunak’s Summer Stimulus Package’. The main points of which were:

As most pubs and restaurants are operating well below maximum capacity, the job retention bonus could well make the difference between an owner retaining a member of staff, instead of making them redundant. Unfortunately, because alcoholic drinks are excluded from the other two measures, they will only be of limited help to the average pub.

Have all the big breweries played fair with their tenants?

It might surprise you to know that the majority of pubs in the ‘independents’ category do not, in fact, own their own premises but rent them from one of the big boys. Some of the brewery landlords have behaved well and have supported their tenants.

One leading example is Greene King, one of the UK’s largest pub retailer and brewer, operating 1,100 pubs, as well as a number of restaurants and hotels. Greene King has provided £11m in rent concessions to its pubs, as well as investing around £4m in other financial support. They’ve also given every landlord a £250 Personal Protective Equipment kit for reopening, plus £120 of Covid-19 signs for pub gardens and interiors.

At the other end of the scale, and in complete contrast to Greene King, we have a certain pub company based in Burton upon Trent who operates around 1,300 pubs (I’ll refer to them as Pub Co). Pub Co have done almost nothing by comparison and give the distinct impression that they simply don’t care if one of their landlords goes to the wall, which I believe the following example will demonstrate.

An Example of Big Breweries not caring 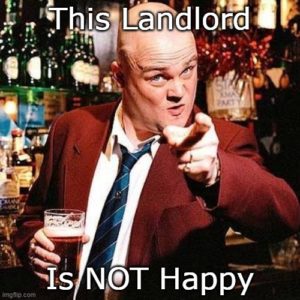 The landlord of this pub is a client of mine, so I will protect his identity and refer to him as ‘Pete’. His pub is leased from Pub Co and is in Shropshire. I visited him the day before reopening and from a safe distance of course, he showed me what he’d done to his beer garden with cleverly built-in furniture, an outside proper bar and shelters. Indoors he’d bought new furniture to better operate the one metre + rule and told me that even with doing most of the installation work himself, he had spent comfortably in excess of £20,000.

I then asked what help Pub Co had given him and the answer was absolutely nothing. Pete told me that Pub Co had not provided any financial help or even some PPE and Covid-19 signage, they had not even waived invoices for beer thrown away because of the lockdown. I asked about rent, which I was aware was just over £1,000 per week, and Pete almost burst a blood vessel.

He told me that his rent had not been waived during the lockdown but deferred to be repaid over the next 12 months. He then informed me that Pub Co had contacted him in the last week to say that they were aware that he had received an emergency coronavirus grant of £25,000 from the local council and that they, therefore, expected him to immediately write them a cheque for all of the deferred rent. Completely ignoring the fact that he’d already spent the money adapting his pub to be able to reopen.

Whilst the above example shows the uncaring side of big business, in truth most of the bigger players have provided some help for their tenants, as indeed has Rishi Sunak. Unfortunately, even with help, many pub operators who were struggling before the lockdown, will not survive in the ‘new normal’.