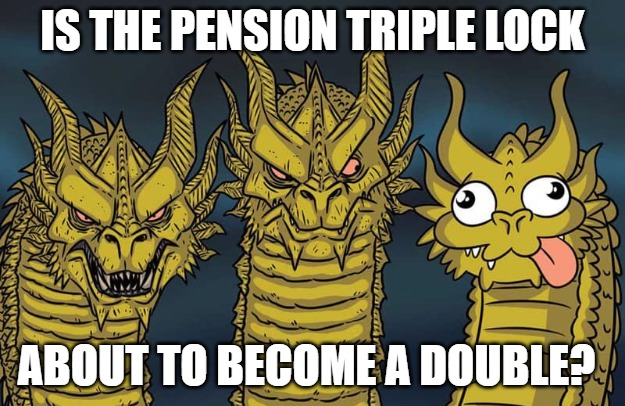 Has the Corona Virus Ended the Pension Triple-Lock?

The UK’s basic state pension rises typically each year, based on the UK’s rate of inflation, but this is now under threat because of the enormous hit to the economy by the coronavirus epidemic currently raging.

Chancellor Rishi Sunak is under increasing pressure to do away with the so-called ‘triple-lock’ arrangement, which guarantees a minimum annual rise in the state pension paid of 2.5%. This is because of the enormous costs of the furlough scheme, the self-employed support scheme and other measures introduced to prop up the economy during the pandemic.

The Chancellor’s own Department is forecasting that the £55bn borrowing forecast contained in the March Budget, will now be exceeded by a whopping £250billion by April 5th next year, entirely down to the additional costs caused by the coronavirus crisis.

In a leaked Treasury document, officials have admitted that it will be virtually impossible for the economy to bounce back quickly without taking some rather unpalatable measures, which allegedly include doing away with the triple-lock arrangement for pensions.

The triple-lock is a legal guarantee, introduced by the government in 2010, to make sure that the basic state pension rises in line with the highest of:

Triple lock meant the UK’s state pension rose by 3.9% on April 6th 2020, which corresponded to average weekly earnings, as opposed to inflation which was 1.7% or the guaranteed minimum of 2.5%.

Why is the pension triple-lock under threat?

The Social Market Foundation (SMF), Britain’s leading cross-party think-tank, released a briefing paper last week. The article pointed out that the triple-lock policy had ensured that pensioner household incomes consistently rose during the 2010s, even as working-age households suffered almost no wage growth.

In this document, the SMF said that the substantial economic cost of the emergency measures deployed to manage the epidemic must be shared equitably between old and young in the years ahead. Also, the large deficits anticipated post-crisis are likely to force ministers to reform and reduce state spending to help repay additional borrowing.

The SMF in their briefing paper argued that any future austerity programme must not favour pension spending over working-age welfare, as happened after the financial crisis of 2008/09 and suggested that the basis of future pension increases should use a double-lock system.

What is the double-lock system?

In essence, the double-lock system would retain elements one and two of the triple-lock but do away with the guaranteed minimum rise of 2.5%.  Double-lock does not necessarily mean less money for pensioners provided average wage growth or inflation is higher than 2.5%.

The Resolution Foundation has recently published data that shows a significant change in pensioners’ income compared to families of working age. Their research shows that 20 years ago, a household wholly reliant on pension income was £70 per week worse off when compared with the household income of a working-age family. However, in 2020 the pendulum had swung the other way. Pensioners now approximately £10 per week better off than a working family.

The SMF briefing paper shows that the economic impact of lockdown policies is falling most heavily on working-age Britons, many of whom face redundancy followed by years of higher taxes, reduced services, and slow economic growth.

Lockdown policies have rightly been deployed to protect the lives and wellbeing of those most vulnerable to the virus, a group that includes older people.  To retain social cohesion and public support, fiscal policy should demonstrate “reciprocity” for that support, the SMF said.

The SMF report also said: “In the post-crisis world of slow, painful recovery, a triple lock ensuring a 2.5% minimum rise in pensions would constitute enormous generosity to pensioners. At a time when working-age adults face low or no wage growth and significant unemployment. In the context of an annual deficit that could reach £200 billion as we emerge from the crisis, shaving £4 billion a year from the growth of the £100 pension bill is not too much to ask. It would also demonstrate reciprocity from a group whose wellbeing was, rightly, prioritised during the lockdown phase of the crisis.”

The Centre for Ageing Better, a charitable foundation, funded by The National Lottery Community Fund has responded to the SMF’s call to scrap the triple lock on pensions, with a vigorous defence with Anna Dixon, Chief Executive of the charity stating:

“We rightly need to look at how society can pay for the additional costs of coronavirus to the NHS and financially support those who have lost their jobs and livelihoods. But we must pause to think before making knee-jerk changes to our state pension. We already have one of the lowest state pensions relative to earnings in the OECD, and today 1.3 million pensioners in Britain are living below the poverty line. For the many people who rely on the state pension, even small changes could have a devastating impact.”

“Proposals to ditch the triple lock are often made in the name of ‘intergenerational fairness’ – but in reality, it’s both the poorest and the young who would be hit hardest by its removal. Research shows that getting rid of the triple lock would lead to 700,000 more people in poverty by 2050 and would double the amount a low-paid young worker needs to save to avoid poverty in old age.”

“We should be asking questions about how we build a fairer society as we emerge from this crisis. That means finding ways to provide financial support to workers at all ages without harming those for whom the already-meagre state pension is a lifeline.”

As someone who recently began receiving the state pension, I have something of a dichotomy of views. One part of me, probably the selfish side if I’m honest, wants the triple-lock to continue. However, wearing my accountant’s hat, I fully understand that everyone, including pensioners, must make some contribution to putting UK plc back onto an even financial keel.