Coronavirus:  How bad will the recession be? 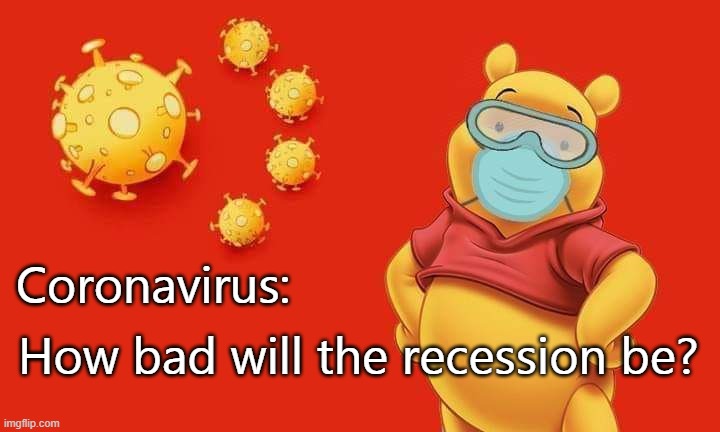 On Wednesday, the Chancellor said: “It is now very likely that the UK economy will face a significant recession this year, and we’re already in the middle of that as we speak.”

The 2% first-quarter record fall was driven by the coronavirus forcing the country into lockdown. This resulted in a dramatic drop in March’s output figures and came after the economy stagnated in the final quarter of 2019.

All economists expect a significantly more significant slump in the current quarter. Mr Sunak’s release of the economic data shows that the UK economy has already undeniably entered a recession. However, the confirmation will not be official until August.

In and of itself the loss of 2% of the value of the economy in one quarter is very rare, it is one of the five worst three-month periods since modern records began in 1955. But this was the consequence of an already stagnant economy hit by just ten days of the official shutdown at the end of March.

The shutdown caused a record monthly fall in the economy of 6%, the same fall seen over a much more extended period in the last recession in 2008. It means that the current second quarter between April and June is set to see truly incredible record falls between 20 and 30% – perhaps a quarter of the whole economy.

Coronavirus Recession: What is the Bank of England’s view?

Despite Boris Johnson’s exhortations for people to go back to work from May 13th, assuming that they “can’t work from home”; together with new guidance for employers to make workplaces “Covid-secure”, a regular pattern of working throughout the economy is unlikely to happen for several months. This can only exacerbate the financial damage being inflicted on large swathes of business.

Recently the Bank of England has estimated, that based on a likely minimum lockdown period of 3 months. The UK’s gross domestic product will shrink overall by 14% this year, with a 25% hit in the second quarter alone.

However, it is now clear that following the release of the government’s roadmap of when the various business sectors will be allowed to go back, that parts of the economy, notably the hospitality and tourism sectors, may not be fully operational until much later in the year and conceivably, not until 2021.

When pressed, the Bank’s new Governor Andrew Bailey, admitted that based on the roadmap the Bank now felt that the shrinkage in the UK’s GDP, could be up to 20%. And when asked what he thought of the effect on business, he said, “It won’t take much to push two hundred thousand plus businesses into trouble. Like FlyBe, at the beginning of the lockdown, this crisis could be the final nail in the coffin, for many businesses.”

Even before the UK economy went into lockdown, Red Flag Alert, the business intelligence service, which produces a comprehensive index of businesses at risk index, highlighted the fact that at least a quarter of a million businesses were struggling financially in some way and potentially at risk.

The various business support measures put in place by Rishi Sunak, such as the job retention scheme, business rates relief, business interruption and bounce back loans; do of course give business owners much needed short-term lifelines, but in reality, may only delay the final crunch. The 80% of pay furlough grants, effectively saved millions from being put on the ‘dole’ and their employers from going to the wall, but a lot of the help was by fully or partly guaranteed loans. However, loans are not free money and will need to be repaid at some point.

Another factor to be borne in mind is that the courts have not been sitting during the lockdown, so action on winding-up orders and county court judgements against businesses has all been suspended. HMRC enforcement action, including the issue of winding-up petitions, has pretty much ceased. Still, you can bet your last penny on it resuming with a vengeance within a matter of months.

Also, on a macroeconomic level, there is the unknown quantity of consumer confidence, which, as a minimum, is bound to be severely dented. Even when the lockdown is eased, it will take a long time for people to be comfortable going out to the pub, coffee shop, restaurant and even normal shopping. Travel, tourism and hospitality were the first industries to suffer, and they will be the last to emerge.

It is inevitable that businesses that were borderline viable before the crisis will start falling over in large numbers. A B of E insider commented, “In terms of natural selection, it’s almost Darwinian. Businesses that are adaptable and fleet of foot may be the only ones that survive unscathed.”

Coronavirus Recession: The piper will still have to be paid!

If you look at the likely effect on business cashflows over the next 12 months, even if the economy manages to get back to something like normal later in the year, two crunch points are looming in early 2021. The first will be on January 31st, this is when deferred income tax and NIC payments come back into play and the second is March 31st, 2021, when any VAT deferred becomes payable.

This build-up of tax debt will of course, be compounded by next year’s liabilities, Income Tax payments on account, rent and other recurring costs, not forgetting the bounce-back loan repayments.

Business cashflow forecasts will increasingly start to reveal the gaps between the cash businesses expect to have and the amounts they are going to need to pay. If there are visible gaps already, the business owners are going to need to move very quickly to avoid the risk of failing.

As long as Rishi is satisfied that with some continuing financial support, a business will survive and eventually prosper, I’m sure he will leave the tap running, albeit with a more restricted flow.

Unfortunately, there will inevitably be casualties and the tightrope that Rishi has to tread in continuing to support viable businesses whilst cutting others off will be incredibly difficult.

I consider Rishi Sunak to be an inherently decent man. He would not throw business to the wolves because of political dogma. However, it’s worth remembering that the UK’s ability to borrow more than it receives in taxes is finite and to quote Theresa May, ‘there is no magic money tree’.