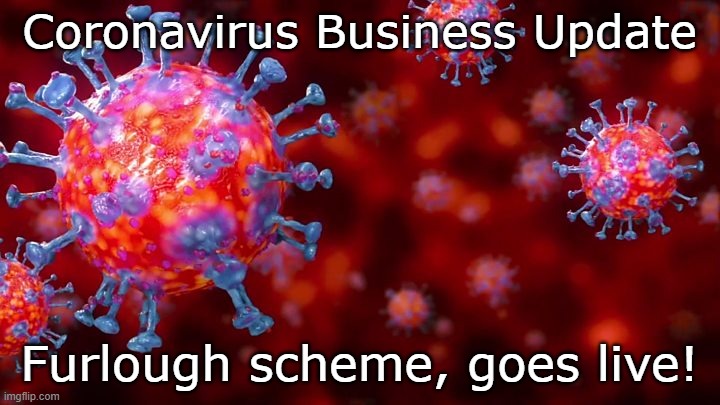 The government pay scheme to keep staff on the payroll despite not working due to coronavirus has gone live, with HMRC chief executive Jim Harra jubilantly telling BBC’s Today programme on Monday morning that employers had made 67,000 job successful claims in the first 30 minutes alone.

Harra went on to say: “The big payroll date this month is on the 30th, so employers can claim anytime today, tomorrow or on Wednesday, and there’s time to get that money into their account for the 30th of April.”

So, if your business is eligible and you haven’t yet claimed to go to https://www.gov.uk/guidance/claim-for-wages-through-the-coronavirus-job-retention-scheme You will have to go through a long-winded 14 screen sequence, but apart from it being a bit time consuming, it works and from my own experience, should take no more than 15 minutes.

The Treasury says the system can potentially process up to 450,000 applications an hour, with employers given a promise they should receive the money within six working days of making an application.

CJRS: What to do if you don’t have a PAYE authorisation code

When the furlough scheme or CJRS, was first announced on 20th March, HMRC stated that only employers themselves could claim, with payroll bureaux barred from using it. However, they forgot that thousands of accountants, up and down the land, whilst not classified as PAYE bureaux, nevertheless undertook the payroll for a number of their clients.

So, at MJ&Co as elsewhere, we took the advice of our professional body and contacted all our payroll clients and talked them through how to apply for an authorisation code, which is needed to make a claim. The clients were told that as soon as the code was received, which usually takes a week to 10 days, to immediately pass it on to us and we would make the claim on their behalf.

Simple you might think and in theory, you would be correct. Unfortunately, even though most of our clients correctly applied over two weeks ago, none have yet received a code, which anecdotally, has been mirrored at most other accountants.

Is this a Machiavellian plot by HMRC to delay some of the payments or just typical HMRC inefficiency? Either way, it may cause real hardship if not sorted very quickly.

There has been much confusion about exactly what “on the payroll” meant for claiming the CJRS grant. Originally, to be eligible for the CJRS scheme, an employee had to have been on the end of month RTI PAYE return that employers have to make to HMRC.

Thus, the original cut-off date for the furloughed employees was therefore 28th February, which gave rise to a clamour of complaints that this was unfair to individuals who switched jobs before it became clear that a lockdown was about to be announced.

I’m pleased to be able to tell you that Rishi Sunak has had a change of heart and the Treasury has now changed the cut-off date for the furloughed employees to be on the employer’s payroll to 19th March.

The employer can claim 80% of the furloughed employee’s wages, subject to a cap of £2,500 per month. The original guidance said this salary should be that in place as 28th February 2020, but the new guidance refers to the last pay period that ended prior to 19th March. For monthly paid employees, the relevant reference date is likely to be around 28th February, but for weekly payrolls it could make all the difference.

The policy for employees who were made redundant and then re-employed by the same employer has also changed. This means that if an employee had been notified to HMRC as being on the payroll as of 28th February, was then made redundant or stopped working for the employer before 19th March, they can be included in a CJRS claim if they have been re-employed by the same employer and furloughed.

The re-employment date can be after 19th March if the person was identified as an employee of the employer in an RTI PAYE submission made by 28th February 2020.

CJRS: How the cut-off date was set

When the furlough scheme or CJRS, was first announced on 20th March it was stated that it would only apply to the pay of employees “on the payroll” on 28th February, as HMRC needed to draw a line to prevent fraudulent claims from being made.

If the eligibility date had been set after the scheme was announced, potentially, unscrupulous employers could set up a PAYE scheme with fictional employees to take advantage of the grant. HMRC will compare the employees’ details in the CJRS claim to RTI PAYE reports already submitted by the employer, thus ensuring that no money is paid out for fictional employees.

I am very relieved that this scheme, set up from scratch in less than a month, so far seems to be working well, with no reports of the HMRC portal crashing or having any significant technical issues. I just hope that the missing authorisation codes arrive very soon, because if not, the Chancellor instead of giving Jim Harra a Knighthood for his efficiency, might be tempted to give him the boot instead!