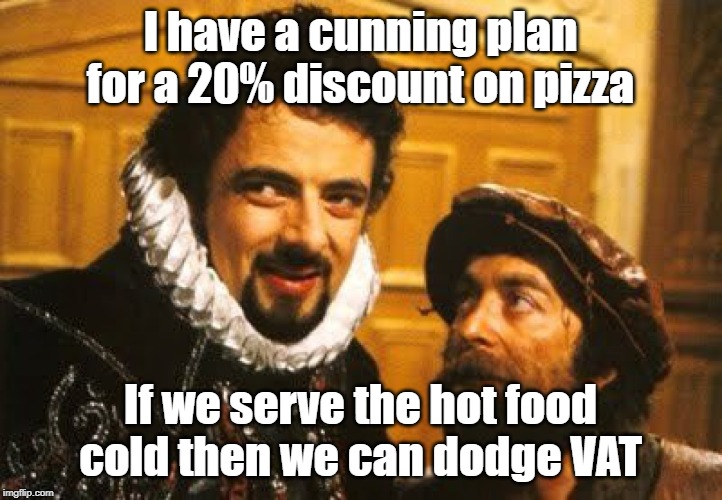 The VAT on Cold Takeaway Food

I recently had an urgent SOS call from a client named Marco, who runs a pizza takeaway business. I felt like James Bond being called into action on a high-profile mission: ‘Operation Margherita’, so to speak. The business owner was convinced that if one of his delivery drivers got delayed in traffic (or got lost) on his way to dropping off a pizza at a customer’s house, then it should be zero-rated as cold takeaway food.

Marco’s reasoning was the pizza had cooled down due to the lengthy delivery time delay, so it should be classified as cold food with the price reduced by 20% as a result of no VAT is payable.

So, does Marco have a valid argument?

Marco didn’t have a problem with the smaller-sized pizzas he sold being standard-rated as hot delivered food because these pizzas fitted into heat-retaining bags, so did not cool down on the journey to the customer’s house. In other words, there was no question about whether they arrived hot or cold.

He also accepted that the pizzas he sold over the counter to customers were standard-rated in all cases as they were guaranteed to be hot. So far, so good.

The owner argued that large and family-sized pizzas were too big to fit into a driver’s heat-retaining bag, and they were instead packaged in normal trays. This would inevitably lead to a cooling-down period between the time the pizza was taken out of his oven and was eventually delivered to the customer’s doorstep.

Marco quoted four reasons why there might be a long time delay, which would mean that the pizzas would either cold or at best lukewarm when delivered and therefore zero-rated as cold food.

Pasty Tax: What does the HMRC guidance say?

The relevant guidance is to be found in VAT Notice 709/1 and after the confusion with George Osborne’s “pasty tax” budget in 2012, we now have clear(ish) rules about VAT and hot food.

The VAT Notice states that if the food comes out of the oven and is above the ambient room temperature, it has to go through five different hurdles (and pass all five) to secure zero-rating.

This means that the food is standard-rated if any of the following 5 tests apply:

Unfortunately for Marco, the argument for zero-rating on the large and family pizzas is dismissed by test 1. This confirms that the relevant issue is the temperature of the food when it comes out of the oven and the intention for it to be delivered as hot food, rather than by making a detailed analysis of the temperature when the customer takes ownership.

To quote from para 4.3 of VAT notice 709/1 about test 1: “it’s the purpose of the supplier (and not the customer) in heating the food that counts.”

As a final nail in the coffin of Marco’s well-argued and very impressive but, ultimately flawed argument was also defeated by the comment on his website that “your delicious pizza will arrive piping hot ready for you to enjoy with your friends.” This statement means that he has also failed test 5.

The purpose of the post ‘pasty tax’ changes to the legislation is to ensure that hot takeaway food is always subject to VAT and cold takeaway food, by and large, is always zero-rated unless it is a specifically excepted item such as an ice-cream or a chocolate bar.

Regrettably, for Marco, his cunning plan fell foul of the clear guidance given in notice 709/1, which in most cases is conclusive.
If you would like more detailed information on some aspect of UK Tax, send me an e-mail and I’ll be pleased to advise further.

Is it now time to switch from VAT to a Sales Tax?
Self Assessment Payment: HMRC will soon not accept Credit Cards
The Chancellor's ‘Bounce Back Loan Scheme’ (BBLS)