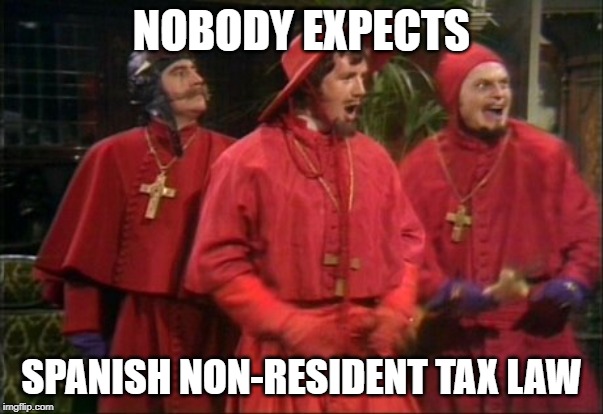 As a UK-based owner of a property in Spain, I was shocked to find out this week that owners  of Spanish properties will pay higher income tax after Brexit and may also lose the right to an exemption from capital gains tax arising on the sale of a former home.

I discovered this news when reading one of the multitude of explanatory notes produced by the government’s Brexit Department in recent weeks, of which very few have had any publicity, presumably because it’s one of the plethora of ‘what ifs’ arising from the ongoing Brexit saga.

So why does the UK leaving the EU make a difference to the tax treatment of Spanish properties held by UK residents?

Apparently, it’s all tied up with the Spanish non-resident tax law. There are different tax rates and treatments based on the residence status of taxpayers – whether they are EU/EEA residents or not. When the UK leaves the EU all UK residents immediately lose their status as EU residents.

I dug a little deeper to find out if non-EU residence status will affect the income received in the entire Spanish tax year, or if there is a split-year treatment so the income in the period before Brexit has a more favourable tax treatment than income after Brexit?

I discovered that good news that the Spanish system has previously allowed a split (calendar) year tax treatment in similar circumstances so it appears highly likely that tax filings for the Brexit tax year will take account of the different tax rates and allowances pre and post Brexit.

The next key question I needed answering was, how much extra tax will UK owners who let out their properties have to pay? At present EU residents should pay 19% on rental income but this will jump to 24% for non-EU residents post Brexit. Additionally, you will lose the ability to claim for deductions of costs relating to the property, such as mortgage, insurance and utilities, from rental income received.

I’ll give you an example to illustrate the point:

Gemma lets an apartment for €900 per month. The mortgage and running costs of €600 per month are currently deductible. Gemma then pays Spanish income tax at 19% on her net earnings of €3,600 per year, being €684.

After Brexit, Gemma’s UK income tax bill will be fully covered by the Spanish tax paid, but she can’t claim a refund for the extra Spanish tax. It’s the partial loss of tax credit in the UK that will be the real problem, and this will affect basic rate taxpayers even worse than higher-rate taxpayers.

Non-Resident Tax Law: What can I do?

When it became abundantly clear to me that there was going to be bad news for UK owners, whatever form of Brexit takes place, I contacted the dozen or so clients who I knew were potentially in this situation and I’ve reproduced below some of their questions, together with my answers.

Q: Could I as the landlord avoid this tax hike by leaving the apartment empty?

A: Not really; one of the strange things about Spanish tax is that all second homes are deemed to generate imaginary rent equal to 2%, of the valor catastral (rateable value) of the property. This deemed rental income is also taxable at 24% for non-EU residents instead of at 19%.

Q: As a UK resident, should I immediately sell my Spanish property?

A: I don’t think that Brexit should be the trigger to immediately sell property in Spain, but bear in mind that, whether the property has been used as a second home or let out, any gain made on the sale is taxable at 19% and this rate will not be affected by Brexit. The gain will also be taxable in the UK at 18% (Basic rate taxpayers) or 28% (Higher rate taxpayers) with a tax credit for any Spanish CGT paid. However, the UK gain is calculated differently as any exchange rate gain will also be taxed.

Q: Does the tax position change if the property has been the owner’s principle private residence and is sold?

A:  Owners who are aged over 65, and who have lived in the property for at least three years, will still benefit from a full exemption from capital gains tax on the sale. However, for under 65s, the exemption only applies if they acquire a new home within the EU or EEA, but not the UK.

Q: Will any of these tax changes be mitigated or postponed under the withdrawal agreement with the EU?

A: The Withdrawal Agreement I have read makes no provision whatsoever to treat UK residents the same as EU residents during the transition period. However, it’s quite possible that the Spanish administration will extend favourable treatment unilaterally to UK residents and I have read Spanish press articles that say that this will happen, but I can’t give you any guarantees. The detail of what Spanish tax charges will be applied to UK residents in the transitional period has yet to be negotiated, let alone agreed.

Just in case any of you were wondering about how the above will affect me, the answer is…

As I have no intention of selling, with the property being exclusively used by me and other family members, I will ultimately qualify for the ‘over 65’ exemption. However, as it is a holiday home, I suspect that I may have an issue over the deemed ‘imaginary rent’ but I’ll cross that particular bridge when I come to it.