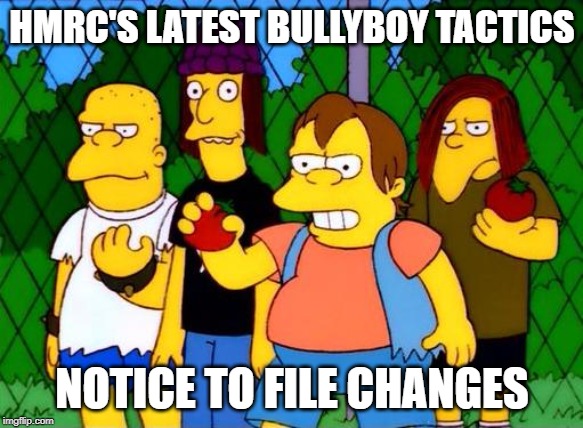 An eagle-eyed accountant in Birmingham, Alex Jameson, recently noticed a minor change in HMRC procedures, that will have potentially huge consequences.

Mr Jameson discovered that the tax law has been subtly amended so that certain decisions currently required to be made by an HMRC officer will instead be performed automatically by the HMRC computer. This change will apply retrospectively to all open decisions.

Notice To File Changes: What happened?

This potentially huge decision only came to light when HMRC published a dull-looking technical note about automated processes in the tax system. Mr Jameson, on a routine sweep of tax news, was alarmed to find that a significant change to the tax rules around issuing notices and penalties will be brought into effect without any prior consultation. What’s more, the new law will be retrospectively and prospectively applied from 31st October 2019.

Notice To File Changes: What are the implications?

The machinery of the tax system is largely contained in a law which is now nearly 50 years old: The Taxes Management Act 1970 (TMA 1970). This was written before the automation of a large number of HMRC’s functions, such as the issuing of a notice to file a tax return and the issuing of automatic penalties.

Where the imposition of a penalty, say for the late filing of a tax return, is challenged by the taxpayer, some tribunal judges have looked very carefully at the evidence presented by HMRC to the tribunal. Quite often the judge will ask which HMRC officer made the decision to issue the notice to the taxpayer, as that is what the law requires.

To give you an example, in a recent tribunal case, the judge ruled that in order for a notice to file a tax return  to be valid, it must be given to the taxpayer by “an officer of the Board” (meaning HMRC), and he expected the notice to be signed by a named HMRC officer, which had not been done and HMRC lost the case. In that case, and in many other similar cases, HMRC’s evidence consisted of:

HMRC are, in effect, asking the judge to infer from those documents that the notice was actually sent by an HMRC officer to the taxpayer at the appropriate time and to the correct address. Many judges are refusing to make that inference and are cancelling the disputed penalties.

Notice To File Changes: No consultation

The technical note provides no indication whatsoever that the changes to HMRC powers will be consulted on. It says that legislation will be introduced in the next Finance Bill to “affirm that HMRC’s practice of using automated processes to help fulfil certain functions has a firm legal footing.”

In other words, HMRC is now asking Parliament to change the law so as to legitimise their conduct in issuing notices automatically by a computer without the actions of a real HMRC officer.

This change was put to barrister Keith Gordon, who commented: “Several cases are being litigated which turn on HMRC being required to comply with their own legislation and not merely with some approximation of the statute. One example concerns the need for certain actions to be taken by ‘an officer’ yet HMRC think that a computer will do.”

The technical note states: “This is not a new policy, and nothing will change for taxpayers.” However, this is simply not true for taxpayers in the middle of a dispute with HMRC over the automatic issue of a notice or penalty. If the taxpayer had not received a settled judgment on the matter before 31st October 2019, they will be subject to the new legislation – which is yet to be published and does not have a date of publication.

As Keith Gordon points out, this proposal undermines cases which are already queued up in the court system: “HMRC is proposing to extend this retrospective treatment to all taxpayers who are in the middle of litigation on this very point, thereby rendering any such litigation wholly redundant and irrespective of what the judge was going to say.”

The technical note also has the cheek to claim: “There will be no adverse impacts on taxpayers”. This is most definitely questionable, as Ray McCann, past president of the CIOT, notes: “It will undermine decisions of the tribunal that make clear that a human should give some thought before causing problems to another. I am also disappointed to see an announcement scrape through just before this Parliament ends.”

My own thoughts on the matter are that this is just the latest action of the Big Brother bully-boy tactics of HMRC, which I regret to say are likely to get worse.
If you would like more detailed information on some aspect of UK Tax, send me an e-mail and I’ll be pleased to advise further.

Latest Finance Bill Packs A Punch
Ken Dodd has the last laugh over HMRC
Work Christmas parties are allowed, but will you go?