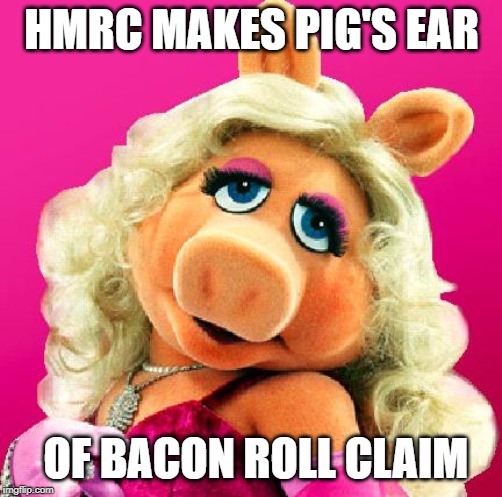 HMRC has been conducting a number of so-called ‘webinars’ to advise taxpayers and their accountants of the impact of new legislation, changes in their application of taxes, Brexit provisions, to name but a few.

However, a recent HMRC webinar caused hilarity and confusion in equal measure when the tax office presenter claimed the provision of regular bacon rolls for staff couldn’t be classified as tax-free trivial benefits, but then went on to say that gifts of wine could be tax-free.

The presenter of a recent HMRC Talking Points webinar said during his lecture that the cost of the weekly bacon rolls would have to be aggregated over the entire tax year, and if the total cost exceeded £50 the sarnies would be taxable.

This of course is total hogwash!

The cost of gifts provided to staff does not have to be aggregated over the tax year to check if those items can be classified as trivial benefits. The £50 limit is per gift, not per year, and unlimited numbers of items can be provided per staff member as tax-free trivial benefits in any year.

There is an annual limit of £300 for trivial benefits provided to directors of private limited companies, but that aggregation rule doesn’t apply to ordinary members of staff who are not connected to the directors of the company.

I suspect that the HMRC presenter had not actually read the law concerning trivial benefits, nor his own department’s internal manual. If the presenter had perhaps relied on the brief description of trivial benefits on gov.uk he may have been confused, but it is really no excuse to spread that confusion to attendees of an HMRC webinar specifically designed for bookkeepers and accountants.

In the Question & Answer chat at the end of the webinar, the answers given by HMRC focused on the £50 and £300 monetary limits and the presenter managed to completely muddle the two and confuse everyone.

But let’s get back to the law; for a gift to be a trivial benefit all four of these conditions must be met:

Conditions 1, 2 & 3 are simple to assess but condition 4 is less easy to pin down. Point 4 needs the employer to judge whether the item is provided as a reward for the services of the employee.

For example, if the employer promises to provide bacon rolls to those employees who have to turn up 30 minutes early every Friday morning to help with stock-taking. This is part of the employees’ duties and the hot sandwich amounts to a reward for performing those duties so condition 4 is broken.

This is because the free porky snack every Friday becomes expected by employees as part of the benefit for working for the employer and completing a regular task, which means that they cease to qualify as a trivial benefit.

If, however the early starts are intermittent, the incentive of hot bacon rolls is okay. Also, if the employer provides bacon butties or perhaps a bottle of wine as an unexpected treat to employees, that can be classified as a trivial benefit as the employees don’t have to do anything in order to receive the treat.

Also, if every staff member is provided with regular free or subsidised breakfasts or possibly other meals at the workplace, that would not be a trivial benefit.

Where trivial benefits are provided to a director or officer of a private company or to a member of the director’s family or household, there is an annual cap of the value of items which can be treated as trivial benefits of £300 per year.

The same four conditions outlined above must also apply to those trivial benefits for directors, including that the gifts must not be made as a reward for services.

This could make it rather difficult for a one-person company to use the trivial benefit rule to extract £300 worth of value, per year from their company without it being a reward for services. Just imagine the conversation that the director would have with him or herself: 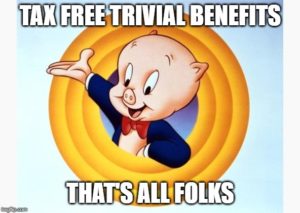 “The company has generously decided to give me a case of wine.”
“Wonderful – what have you done to deserve that?”

“Nothing special – the company is feeling charitable.”

“It isn’t a reward for me increasing the company’s profits is it?”

The deadline for sending 2018 to 2019 Self-Assessment tax returns to HMRC, and paying any tax owed, is 31 January 2020. If you would like more detailed information on some aspect of UK Tax, send me an e-mail and I’ll be pleased to advise further.