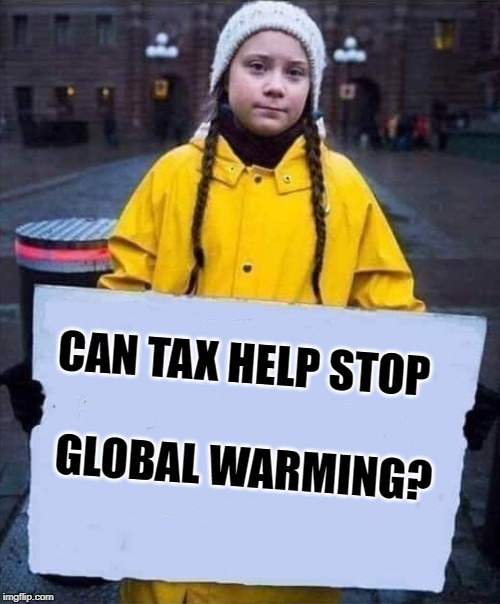 There is a growing belief that taxation could be an effective weapon in the fight against global warming, by changing the behaviour of businesses and individuals in ways that could help preserve the planet instead of potentially destroying it.

The beginning of a change of attitude began with a meeting of top bankers at the World Bank in Washington DC earlier this year. The CEOs were asked whether or not they believe climate change is a serious risk to the financial system and not just the planet.

James Gorman, CEO of Morgan Stanley, summed it up by stating: “if we don’t have a planet, we are not going to have a very good financial system”.

What can world governments do?

There needs to be a shift in the basis of some taxes by taxing carbon rather than money.

In an OECD report published for the UN Climate Summit recently, this shift of emphasis was highlighted. The report said that too many energy users do not pay the energy and carbon taxes needed to curb dangerous climate change. The report contained evidence that shows that tax structures are poorly aligned with the pollution profile of most energy sources.

The OECD also commented that well-designed systems of energy taxation do encourage citizens and investors to favour clean over polluting energy sources. Fuel duties and carbon taxes are simple and cost-effective tools to limit climate change, but the politics of carbon-pricing often prove challenging. Taxes on energy use can also contribute to reducing health damage from pollution.

What can the UK government do?

Many experts consider that we need to start with taxes on-road fuel. The government has frozen fuel duty since March 2011, when it could have been using the potential of this duty to reduce CO2 emissions and harmful NOx emissions.

If the Chancellor of the Exchequer actually reduces fuel duty in his forthcoming Budget, which he has suggested he might, this would be a dire warning that the UK government is not serious about the climate emergency. It would also wilfully disregard the fact that using taxes for climate action does raise revenues, which is in stark contrast to most other climate policy decisions.

Are there any measures that can be implemented without upsetting voters?

There is no doubt that Road-fuel taxes are very politically sensitive, but there other things the government could do without upsetting voters.

Only 15% of energy-related CO2 emissions in the world are from road traffic. Emissions from international aviation and maritime transport are not taxed at all. The UK could act in these areas, but it would be more effective if there was an international approach. While the UK is a member of the EU it participates in the EU Emissions Trading System, but much more could be done.

Electric cars are often held up as a way in which individuals can do their bit to help reduce emissions, but is can this really be true if most electricity they use is generated by burning fossil fuels. The answer to this conundrum is VAT. Currently, two different rates of VAT are charged on the consumption of electricity: 5% for domestic and charity use, and 20% for business use.

The VAT charge applies whether the electricity is generated by the burning of fossil fuels, by hydro, wind, solar or nuclear. If lower rates of VAT are applied to electricity generated from renewable sources, this would effectively put a surcharge on the use of fossil fuels and would help direct private and public resources towards the development of new clean technologies.

Regrettably the VAT law changed earlier this year and it now actively discourages the installation of solar panels and wind turbines.

For years, the UK has applied VAT at the reduced rate of 5% on the installation of domestic energy-saving materials including solar panels and wind turbines. However, from 1st October 2019, the VAT rate on the installation of wind turbines and water turbines for domestic use has increased from 5% to 20%. This was however an EU decision resulting from a European Court of Justice decision, so we can’t blame Theresa or Boris for this one!

The VAT rate chargeable on the installation of solar panels will also rise to 20% in most cases. Once the UK has left the EU, the Treasury will be free to reduce the applicable VAT rate to 5% or less as the EU legislation limiting the VAT rate will no longer apply in the UK.

There is no doubt that our government can use the tax system as one of the most powerful tools at its disposal to change behaviours, and thereby reduce greenhouse gas emissions as part of its commitment to address the climate emergency.

Boris Johnson in his speech to the Tory Party conference this month promised that the UK would be carbon neutral by 2050. He did not spell out in detail how, but suggested that with more and more wind farms being built, together with a couple of new large-scale nuclear reactors coming on-stream in the next 5 years, that by 2025, 80% of electricity would be from renewable or nuclear generation.

He also announced that a dramatic increase in the availability of electric charging stations would be a priority for his government and stated his aim of having more electric than petrol cars on our roads within 10 years.

Whether or not this was pre-election rhetoric or he actually means it only time will tell.

I agree with Greta Thunberg when she said at her recent speech at the United Nations; “The effective tackling of climate change, boils down to political willpower and courage”.
Personally, I believe she is right and hope that our current bunch of squabbling MP’s can put their political differences to one side for the sake of the planet.
If you would like more detailed information on some aspect of UK Tax, send me an e-mail and I’ll be pleased to advise further.