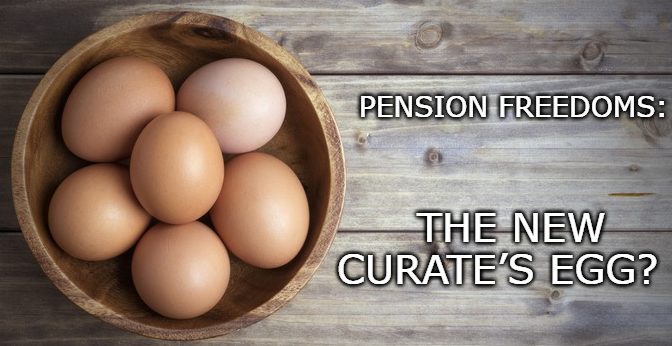 Many people would argue that the pension freedoms reforms by the previous Chancellor George Osborne, announced in the 2014 Budget and which started in the 2015/16 tax, can be considered a success.

There is of course the alternative argument that trouble may not be too far away, as demonstrated by the latest figures from HMRC. These show that in total the amount of money that has been accessed from pension pots under pension freedoms has now exceeded £25bn, which is a fair percentage of most savers’ retirement cash. This is especially so as the £25bn only covers two tax years.

If the headline figures weren’t bad enough, underlying those numbers are some interesting trends. Back in 2015 when the new pension regime was first rolled out the number of individuals making such withdrawals was less than half where we are today (539,000 2018-19), but the average withdrawal size was over twice this year’s average, standing at around £18,000 per withdrawal as compared to just over £7,000 this year.

Well, the first thing that springs to mind is that the very first wave of applicants probably contained an advanced guard who just wanted to get their hands on their pension cash, come what may. The removal of the mandatory rule that you must purchase an annuity effectively breached that dam, releasing the pent-up pressure from this group.

Subsequently we have seen a steady increase in the number of people using their ability to access their pots, but in significantly diminishing amounts. This would suggest that the work of advisers, such as accountants and IFAs may, in fact, be paying off and clients are beginning to learn that only withdrawing what you need is far more sensible than taking the whole lot out of what was, is, and continues to be, a very attractive savings vehicle for the majority of individuals people.

Did the pension freedom doom-mongers get it wrong?

In reality, the stampede to buy a luxury sports car didn’t happen, or at least not very often, and therefore the early-stage doom-mongers are, for now at least, revealed to have been unnecessarily negative about this innovation.

Many experts have long argued that the quickest way of turning someone off pension saving is to tell them that they are too stupid to be allowed to make any decisions about how and when they can access it. It seems like both the saving public and George Osbourne agree.

All is far from perfect, however, and I fear that we may be storing up trouble in the not-to-distant future if we are not very careful.

A recent Radio 4’s ‘You and Yours Special’  on the use of pensions as a vehicle to provide funding for small and medium sized enterprises (SMEs), had  as the main guest Michelle Cracknell, head of The Pension Advisory Service (TPAS), the government-sanctioned guidance body for people with questions about all things pension.

Ms Cracknell advised that whilst pension freedoms could be rightly considered a success, a sub-group of freedom users may, in the longer term, be less than pleased. For SME owners, the seductive lure of using one’s pension pot to provide business funding is a strong one, and in many cases, it makes great sense, especially when existing business borrowing is secured using other personal assets.

However, what many business owners don’t realise is that taking cash out of their pensions under the freedoms rules to support their business was probably not the best idea and will in all likelihood look for someone to blame, even if it helped their business at the time.

It is often only when an individual is on the point of retiring do they start looking at their options and reading the small print. Whether this involves their pension provider, adviser or anyone else upon whom they relied for advice, they will be looking for redress and thus mis-selling scandals are born.

It is imperative that when an individual approaches their pension provider enquiring about withdrawals under the freedoms rule the question should be asked, at the earliest possible opportunity, as to the purpose of the withdrawal, and if it transpires that this purpose was for business use, an alarm bell should ring.

This would, at the very least, ensure that the pension owner was made aware that there are other options and that there is a potential risk to their retirement fund. They should be clearly warned that early withdrawals will have a significant long-term effect on the value of their fund.

The Pension Advisory Service TPAS have concluded that the new freedoms have been successful and are overall, a good thing but not exclusively so. Michelle Cracknell is concerned that the problem of SME awareness continues to grow and could end up becoming a sizeable and very expensive headache.

As the title of this Blog suggests, a bit of a curate’s egg, really.