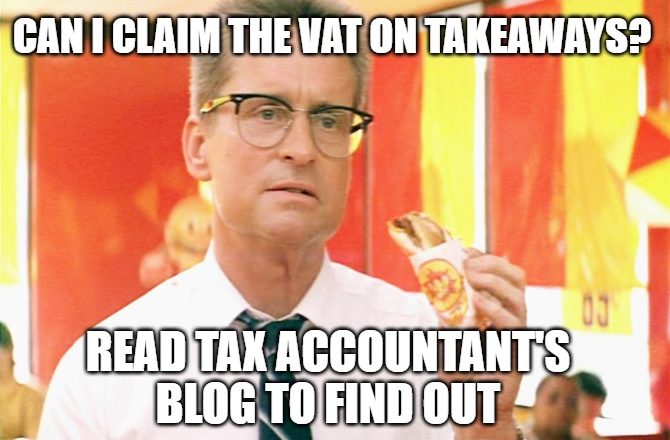 As it has been a couple of months since my last delve into my in-box of tax related questions, I have selected a handful of the questions received that I hope you will find interesting. The Topics today:

1. Can I claim the VAT on takeaways?

I employ half-a-dozen reps and recently I’ve noticed that they have started using the likes of Just Eat when they are travelling. There is no VAT information on the receipts. Can I reclaim the VAT on the food as I assume that the price that the restaurant is charging includes VAT, but it just isn’t shown on the Just Eat receipt?

It all depends on the receipt, if it’s a less detailed tax invoice, you can claim, but If not, you can’t. However, some firms, such as Deliveroo for example, will provide an invoice if asked. This shows VAT on the Deliveroo charges and has a section at the bottom of the invoice where there is box to show the VAT registration number of the restaurant. If the box is filled in then you can claim VAT on the whole invoice, if not its only the delivery charges that are allowable.

2. Is a free meal in lieu of cash allowable?

I own several rental properties. One property needed roof repairs and a neighbour had scaffolding in place and allowed use of it to access roof and upper floor of my rental property, which saved me hundreds of pounds. No charge was made by neighbours, except that they asked to be taken out for a slap-up meal instead of a cash payment, which I did. My accountant’s view is this is disallowable entertaining expenditure, which I think unfair, is he right?

This is a tricky one as entertainment is generally not allowable. However, in your case there is an argument that a verbal contract existed, and relief is available where “hospitality is given as part of a contractual arrangement”. So, I would go back to your accountant and remind him of the aforementioned relief.

3. HMRC have messed up a past year

I recently applied for a pension forecast as I’m 64 and it showed that I had a missing year of contributions. So, I wrote a letter with copies of my tax returns and asked them to investigate and see what could be done. I then received a letter with no reply to my query but stating that the letter I had sent in (with paper copy of my submitted return) needed to be filed on-line and that I have incurred late filing penalties. I rang HMRC straight away, they were decidedly unhelpful, and my online account is now showing that a return was not actually requested by HMRC for the year and also that the tax I’d paid that year is showing as an overpayment.

So apparently no return was requested for 2013, the tax I paid is now sat as overpaid and I’ve been fined for not submitting a tax return – what can I do? I have telephoned many times to resolve it, but no-one at HMRC appears to be able (or willing!) to do anything, help!

From what you’ve said, this sounds like a right royal cock-up, you submitted a return, paid the tax and now they’ve treated that tax as overpaid as well as fining you, unbelievable. I would immediately write to your tax office stating that you wish to appeal against the actions taken by HMRC thusfar and especially the fines imposed. For more information go to: https://www.gov.uk/government/publications/resolving-tax-disputes Make sure that you send copies of all relevant documentation and most importantly, send it by Special Delivery. Additionally it wouldn’t be a bad idea to send copies and a timeline to your local MP, this normally ensures immediate action by HMRC

I’m the sole director of a small business with a rather small turnover and I recently received a penalty notice from Companies House for the late filing of annual accounts. I filed them just before midnight of the day they were due. Unfortunately, there were a few issues with their website and the internet seemed to be operating at a snail’s pace, but I was certain I had filed before the midnight deadline.

Companies House have informed me that they recorded their acknowledgement of the Accounts as exactly 00:07, and hence late, so fining me £150. I feel the penalty is very harsh, considering that I was less than 10 mins late. Also, the profit for the year in question was £102 and I cannot really afford that amount. I appreciate that I shouldn’t have left filing until the day they were due, but do I have any hope of successfully appealing this penalty and what kind of reasoning might help in the appeal? Any advice greatly appreciated!

Good luck with your appeal but playing chicken with Government deadlines is very rarely the smartest plan. Also, penalties aren’t profit related, you would still have been fined if you’d posted a loss. My experience is that appeals never worked when we filed by post. The answer was always the same “you had ten months to file, but you chose to leave it until the last minute”. That being said, as you had technical issues which CH will hopefully be aware of, my advice is to telephone them and put your case, you never know your luck!

UK Tax Questions Answered by Shrewsbury Accountant No.19
HMRC Bully Boys Get Their Comeuppance
Coronavirus: Pubs stumble down the road to recovery