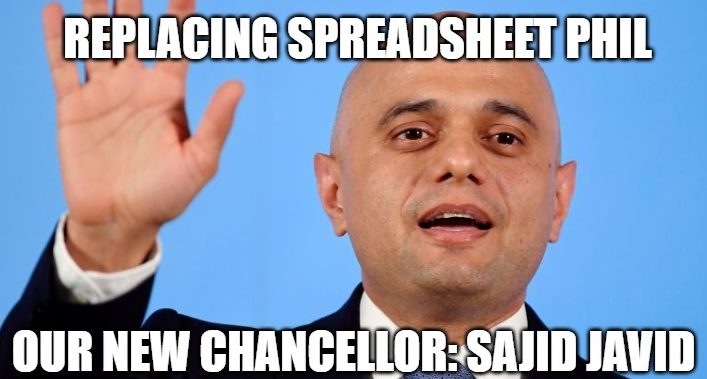 With BoJo ensconced as prime minister, attention has turned to his cabinet choices charged with getting the UK back on track after a period of extensive political tumult. Of particular interest to anyone in business as well as all accountants, is the newly appointed chancellor.

Following the departure of ‘Spreadsheet Phil’, we now have his replacement: Sajid Javid, former home secretary, who has now been handed the keys to number 11.

Born in Rochdale, Lancashire to Pakistani immigrant parents, Javid has traced a somewhat uncommon path to highest rungs of Westminster. He attended state comprehensive in Bristol before studying politics and economics at Exeter University.

Upon concluding his studies, Javid embarked on a career in investment banking, working for Chase Manhattan Bank and then Deutsche Bank. He enjoyed a rapid ascent up the ranks, becoming a senior managing director at Deutsche Bank by the age of 40. He left his banking career in 2009 to pursue a career in politics.

As a politician, he is hard to classify: a long-time Eurosceptic who voted Remain, he said, “with a heavy heart”; a Thatcher devotee charged with loosening the purse strings to fulfil Johnson’s vision of “better education, better infrastructure, more police, fantastic full-fibre broadband sprouting in every household”.

It’s from comments made during his recent leadership bid, where it’s possible to glimpse Javid’s policy agenda. He has already said he wouldn’t oppose a no-deal Brexit and signalled an intention to prepare an “emergency Budget” including tax cuts to ease the economic impact on UK plc.

Indeed, tax cuts seem to be rather high on the new chancellor’s to-do list. During his leadership bid, Javid said he wanted to cut the basic rate, and even told the press he would consider scrapping the top rate of income tax altogether.

He also advocated a “£100bn National Infrastructure Fund”, to take advantage of some of the lowest interest rates in centuries to invest in projects which will create jobs and boost the British economy.

In his new position in Johnson’s cabinet, Javid’s days as a political chameleon are almost certainly numbered. The new prime minister has assembled a partisan core group to deliver Brexit come hell-or-high water. Over the next few months, Javid might find his hopes for a united Britain dashed as a febrile political environment begins to grip.

But at least he is optimistic, in a recent speech he said that he is “used to people trying to tell me what I can’t do”. “I’ve always been more interested in what I can do. I know what I can do. And I’m optimistic and determined about what we can do.”

Personally, I think that Sajid Javid is a bit of a pragmatist, but if his place in Johnson’s cabinet comes under question because of his less than enthusiastic endorsement of a No-deal scenario there are two possible replacements already in the cabinet.

These are both representatives from the accounting profession, Liz Truss and Alok Sharma. Qualified management accountant Truss takes the international trade secretary post. She’s joined in the cabinet by her fellow accountant and new secretary of state for international development Alok Sharma, who qualified with Deloitte.

I genuinely believe that Mr. Javid could prove to be an excellent chancellor, providing he isn’t hamstrung by the apparently inflexible brexiteer dogma which appears to be permeating everything in government at the moment.

And to paraphrase a famous quote by Benjamin Disraeli, I am hoping for the best, but as a realist am preparing for the worst.

Coronavirus: New help for business and individuals
How to reduce your Capital Gains Tax by up to 18%
Coronavirus business update – Lockdown 3