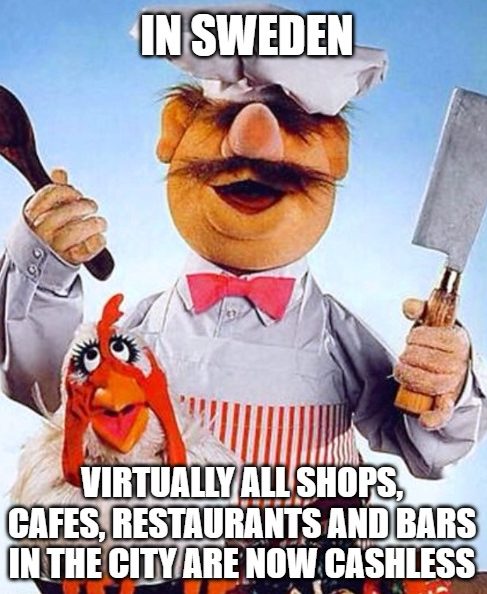 In the retail sector there is an accelerating move to change to cashless retail outlets, which HMRC think is great news and could be for a number of business owners.

A friend of mine recently spent a few days in the wonderful city of Stockholm. He entered the country with 270 krona in his wallet and left it three days later with 250. How could this happen, you might ask – less than 20 krona spent in four days? The answer is because virtually all shops, cafes, restaurants and bars in the city are now cashless – you have no choice but to get out your cards.

This trend is becoming much more common in the UK as well; for example, the outlets at Edgbaston Cricket ground all went cashless for the recent first test of the Ashes cricket series and, this got me thinking about the VAT implications of this profound change.

Is it possible to have a “cash difference” at the end of a trading day if there is no cash in the equation? I have often been asked by clients if their business should record the till total for output tax purposes if this is higher than the physical cash or vice versa.

The answer of course, is that it depends on the circumstances. For example, recording a £10 sale as £100 means that £90 needs to be taken off the till total. But if an employee steals cash from the till after a sale has been made, then output tax is still payable on the amount stolen.

It seems logical that if an outlet is cashless, and a mechanised till and debit card machine are linked, there should be no takings differences because there is obviously no scope for employees or anyone else to steal cash or make errors handing back the wrong change.

So, my first VAT conclusion is that the cashless society will mean fewer errors on VAT returns submitted by business owners because the computer is doing more work. This is the premise that underpins Making Tax Digital: more digitalisation reduces the scope for human errors.

Another possible benefit is that cashless businesses will be recognised by HMRC as being a lower risk for compliance purposes than, say, a kebab take-away that only keeps a manual till to record its takings and only accepts cash.

As a HMRC visiting inspector about thirty years ago, I visited a scruffy pub and the tenant admitted that he sliced 10% off his business cash takings to pay for his gambling addiction. His till procedures came out of the Del Boy Trotter school of accounting. If he hadn’t admitted that his actions were deliberate, he would have probably been assessed for a “careless” penalty in today’s penalty regime, rather than a penalty for “deliberate and concealed” behaviour.

If a business is cashless, how would the owner or possibly an employee, have found his gambling money? The answer is that he would probably have deflected some card payments to his private bank account, in the same way an employee did in the FTT tribunal case: Total Catering Equipment Ltd that I Blogged about a few months ago.

If such a calculated act comes to light, the taxpayer is straight into a “deliberate and concealed” penalty situation because the audit trail will be so easily followed.

But back to Stockholm, apparently it’s becoming the norm for Swedish business owners to pay their tax early. The reason being is that Sweden has negative interest rates, so you are charged by the banks to keep your money with them. An early tax payment, therefore, means reduced bank charges.

Having thought about it, I have come to three conclusions about VAT and the move to a cashless society: