As it appears increasingly possible, we may well have a General Election later this year to solve the impasse on Brexit. If this happens, there is a real possibility of Mr Corbyn taking the reins of power and unleashing his pet attack dog, shadow chancellor John McDonnell, to raise billions in additional taxes.

Messrs Corbyn and McDonnell’s core principle is to make a fairer society by redistributing wealth from the top to those at the bottom of society. An aspiration that the majority of fair-minded people would agree with, however it is how they will do it is the potential problem.

A proposal thought up by the New Economics Foundation thinktank and endorsed by the deadly duo is for the tax-free personal allowance of £12,500, be scrapped and replaced with a flat payment of £208.35 a month for every adult. This proposal, would give every adult over the age of 18 earning less than £25,000 a year, up to £2,500 extra income per year from the state.

If brought in, anyone earning over £25,000 per year, not a big salary by any means, would pay increasing levels of additional tax. When you add to this their proposed lowering of the figure before 40% tax is payable by £13,000, would be a real double whammy.

This would make anyone in middle management, senior teachers, NHS workers, experienced firefighters; the list goes on, considerably poorer because of the higher taxes. 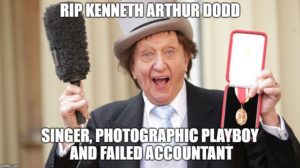 In early July on the Andrew Marr show, John McDonnell announced his plans for a lifetime gift tax (LGT), a bold proposal that would replace Inheritance Tax (IHT) and rake in an estimated £15bn a year.

This reminded me of a Blog I did on Apr 5th 2018 on Ken Dodd having the last laugh over HMRC when just hours before passing away, the comic married his long-term partner and deftly avoided a potential IHT bill of £2.6m.

To many on the political left, inherited wealth is a source of great anguish. The argument is that inherited wealth is unearned and perpetuates a cycle of privilege at the expense of pretty much everyone else. In my opinion whilst they have a point, their views on inheritance are far too simplistic.

“We need to have a fairer system of how we can ensure that wealth is more fairly distributed,” McDonnell said. He continued, “This has been proposed by the Institute for Fiscal Studies as a more efficient way to tax inheritance. Any lifetime gifts over a certain amount should be taxed.” Under LGT, tax would be levied on the gifts received above a lifetime allowance of £125,000.

He went on to explain that when this lifetime limit is reached, any income from gifts would be taxed annually at the same rate as the income tax that the recipient of the inheritance was currently paying. An estimate from the Resolution Foundation suggests that LGT would raise £15bn in 2020/21, £9.2bn more than the current Inheritance Tax system.

The mainstream press hasn’t exactly been kind to the LGT idea, to say the least. Scary headlines and rather superficial analysis of ‘trebling IHT’ abound.

The key difference between the two taxes is that with LGT, tax is paid by the recipient, not the estate as it is currently under IHT.  Add to this a much lower threshold before tax becomes due and the fact that there doesn’t appear to be an easy way to avoid LGT, makes it extremely attractive to Messrs Corbyn and McDonnell.

Can Inheritance Tax be avoided?

For those seeking to minimise the impact of this new tax there are two obvious options:

McDonnell’s proposals do include some conditional exemptions for business and agricultural property, in which tax could be deferred until the asset is sold or until the business ceases to be a trading entity and becomes an investment entity.

What effect will LGT have on Trusts?

The shadow chancellor was a little circumspect when asked about Trusts but said that whilst IHT on the trust itself will be abolished, distributions will be treated as lifetime gifts, subject to the new cap. He went on to say that it’s important to remember the LGT proposal is long term and that he recognised that to implement it “may take time”.