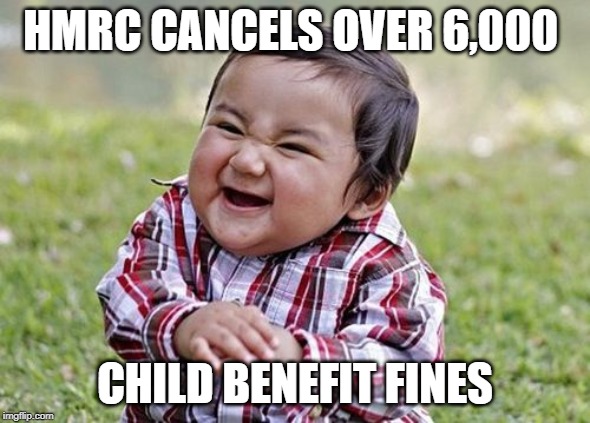 Today it has been announced that HMRC has cancelled over 6,000 penalties issued to parents who failed to notify the tax authority that they had to pay the high income child benefit charge (HICBC). This charge is designed to claw back child benefit paid to families where the highest earner has total net income in excess of £50,000, with all of the full benefit taken via the charge, when that person’s income is £60,000 or more.

Without exception, every one of the professional accountancy and tax bodies warned HMRC that this would drag taxpayers into the self-assessment tax return regime, who would otherwise have their tax affairs adequately dealt with under PAYE. Andrew Hubbard commented in Taxation Magazine: “There seems to have been a complete disconnect between the political decision to claw back child benefit from high earners and the practicalities of putting that policy into operation.”

From 6th April 1990, we have had a system of independent taxation in the UK whereby each person is taxed independently rather than before when a wife’s earnings were taxed as part of her husband’s income. However, state benefits such as universal credit are awarded on the basis of the income of the family. This may be why the HICBC was designed to claw back child benefit from the highest earner in the family, rather than from the benefit claimant, who is usually the mother of the child and also tends not to be the highest earner.

Unfortunately, although HMRC is the body which administers child benefit and thus knows who the child benefit claimants are, it can’t tie those claimants to the tax records of their higher-earning partners because of independent taxation.

When HICBC was introduced on January 1st 2013, thousands of parents have been obliged to notify HMRC that they had a liability to pay the charge. Although there was good publicity about the HICBC at first, the awareness quickly dropped off. Taxpayers who were earning under £50,000 in 2013 were not prompted to notify HMRC of a liability to pay the HICBC when their income crossed that threshold in a later year. As a result, some 35,000 parents received penalties for failing to notify their liability in the tax years 2012/13 to 2015/16.

A number of individuals challenged their penalties, including James Robertson who won his challenge to the penalty on the basis that the child benefit was received by his wife, so he had not failed to declare any of his own taxable income. In fact, child benefit is not defined as taxable income at all and the HICBC is not a tax it is a charge. In Robertson’s case, there was no potential lost revenue (PLR) to assess, so the penalty calculated as a percentage of the PLR had to be nil.

Following Robertson’s appeal and a string of other similar cases, HMRC decided to review all instances of failure to notify penalties being issued in relation to the HICBC for the years 2013/14 to 2015/16. However, HMRC said it would not refund the penalties unless the taxpayer had a reasonable excuse for failing to notify. Taxpayers were not required to take an active part in this review process as HMRC determined that a reasonable excuse was in place if the following three conditions were met:

Based on the above criteria, HMRC has cancelled 6,000 penalties and made refunds in almost 5,000 cases at an average of £368 per taxpayer. HMRC has also announced that all refunds have now been paid out so taxpayers do not have to contact them for a refund.

It wasn’t all good news for parents who had been fined as in situations where one of the parents has been in self-assessment since 2012/13, the penalty for failure to notify won’t be cancelled on the basis that the self-assessment return draws attention to the need to declare the HICBC.

Where the HICBC is due for 2016/17 or a later year, the higher earning parent must tell HMRC about their liability. Also, any parents who have claimed child benefit since January 2013 are deemed to know all about the HICBC, which in the real world is really not the case.