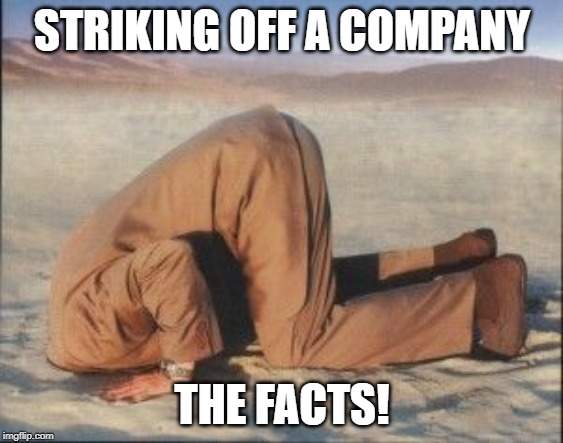 Today I’m writing about the procedure involved as well as the tax implications, when a company is struck off from the Companies House register.

Formal Winding Up: The Law

When you wish to close a company you use the striking off process is used to bring its life to an end. In an ideal world, with agreement between the directors and shareholders, no debts and for the sake of a few petty formalities, Companies House does the administration for you all for the paltry sum of £10.

The striking off regulations can be found under Part 31 of the Companies Act 2006 – “Dissolution and restoration to the register” which permits the striking off of a company in two specific instances:

But be advised, a company cannot apply to be struck off if it is in the process of being wound up or is subject to a CVA (ie a compromise arrangement between a company and its creditors).

Formal Winding Up: Director’s strike off

Assets remaining after a strike off automatically pass to the Crown under the doctrine of “Bona Vacantia” (property without a legal owner). This can be avoided by ensuring assets or property are transferred or dealt with before a company is dissolved; the alternative is a formal winding up and that is expensive.

Companies House will not strike off a company that has outstanding debts or obligations to HMRC. As from April 2020, HMRC will become a secondary preferential creditor for unpaid VAT, PAYE and income tax on any winding up. However, striking off is not winding up, which must be conducted by a liquidator. So the company must be restored to the register if HMRC wishes to make a claim for unpaid taxes at a later date.

Payments to shareholders under a formal winding up are taxed as capital. Assets distributed on a striking off are deemed as capital chargeable to CGT rather than income to a maximum amount of £25,000, with any amount in excess of this is charged to income tax payable on the whole amount.

Formal Winding Up: Other points to consider