HMRC are finally taking on the tech giants 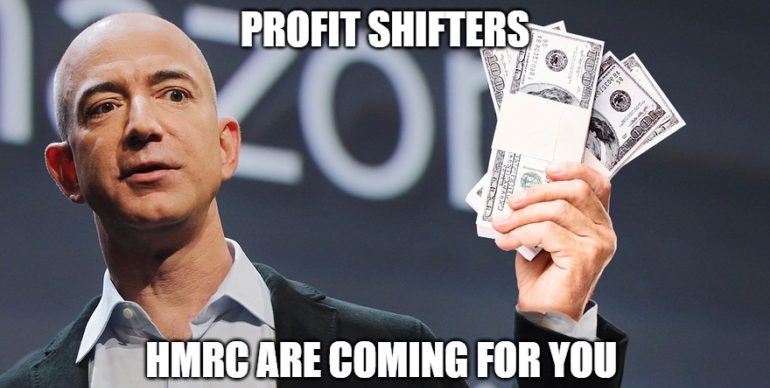 Today I’m reporting on a new push by HMRC against the US ‘tech’ multinationals, after new figures revealed suspected tax underpayments from large overseas firms are rising. According to a freedom of information request, the tech giants’ share of the total “tax under consideration”, (HMRC speak for tax investigations)  has climbed significantly over the past five years, up to nearly 20% in the 2017-18 tax year.

HMRC estimates that around £28bn is owed from large UK and international firms, with the US tech giants accounting for nearly £5bn of the total tax underpaid.

Experts have reported that the multinationals are increasingly being targeted by HMRC’s investigations into procedures which allow multinationals to divert profits to lower-taxed regimes. “We have seen a real ramp-up by HMRC in enforcement activities against multinationals in recent years, through new taxes such as the diverted profits tax, new initiatives such as the profit diversion compliance facility, and by taking increasingly aggressive positions on a range of technical tax issues (including transfer pricing),” said Robert Sharpe, international tax expert at law firm Clifford Chance.

The increased scrutiny on the diversion of profits comes after recommendations made by the Organisation for Economic Co-operation and Development (OECD), as part of its programme for reducing international tax avoidance. They call this project ‘Base Erosion & Profit Shifting’ (BEPS).

HMRC introduced the Diverted Profits Tax in 2015 (DPT) as a way to combat the diversion of profits. This tax is designed to deter activities that divert profits away from the UK so that they are not subject to UK Corporation Tax. DPT is paid at 25%, compared to corporation tax at 19% (18% from 1st April 2010). This higher rate is intended to be an incentive to groups to adjust their transfer pricing, as paying more Corporation Tax is clearly a lower level of tax payable than a DPT liability, which may also include interest and penalties.

Not only did the DPT directly raise £388m in 2017-18, but also had the added bonus of having a significant effect on companies’ behaviour because it allowed officials to challenge and penalise arrangements where the chief motive was to minimise Corporation Tax payments.

Of particular concern to HMRC are deliberate strategies executed by large technology groups such as Google, Facebook, Amazon and Apple, that have huge levels of income from  but  little physical presence in the UK and therefore, under current international tax rules established in a pre-digital era, a limited tax liability.

The UK government has committed to introducing a Digital Services Tax by 2020 that will explicitly target the Silicon Valley giants, along with other search engines, social media sites and online market places.

“HMRC is emboldened by their recent series of victories in tax avoidance cases before the courts, and their estimates of the tax gap mean they believe there is an untaxed pot of gold waiting to be recovered from multinationals,” Robert Sharpe said.

HMRC will be focusing on the tax affairs of all the businesses covered by its Large Business Directorate (LBD – covers the 2,100 largest and most complex businesses in the UK) in the coming year and not just multinational groups.

“It is not just multinational businesses on HMRC’s radar – the affairs of all large businesses are under growing scrutiny,” Jason Collins, tax partner at Pinsent Masons said. “The amount of tax HMRC thinks was underpaid last year was a record high and it will be looking to act on this.”

The wide application of profit diversion initiatives shows that businesses across all sectors would be wise to review their cross-border arrangements, Collins added. “HMRC expects all businesses operating cross-border to have revisited their transfer pricing policies to check they accord with what is actually happening in practice,” he said.

HMRC has opened a new ‘profit diversion’ compliance facility that gives businesses the opportunity to restructure cross-border arrangements that divert profits overseas and pay back any tax that they owe. If a business makes a disclosure, it can face no or reduced penalties and will not be subject to investigation. Penalties could be up to 30% of the tax that HMRC considers is owed, and up to 100% in cases of fraud.

HMRC has a “hit list” of businesses it suspects are diverting profits, Collins said and intends to issue ‘nudge letters’ to those it has identified as non-compliant. “Although making a disclosure under HMRC’s facility can be time-consuming for businesses as it means carrying out an intensive investigation and preparing a detailed report, this is not on the same scale as the cost and disruption caused by a full-blown HMRC investigation.”

My thanks go to Mark Taylor, a financial services journalist specialising in legal and regulatory compliance, white collar crime and technology’ in compiling this Blog.