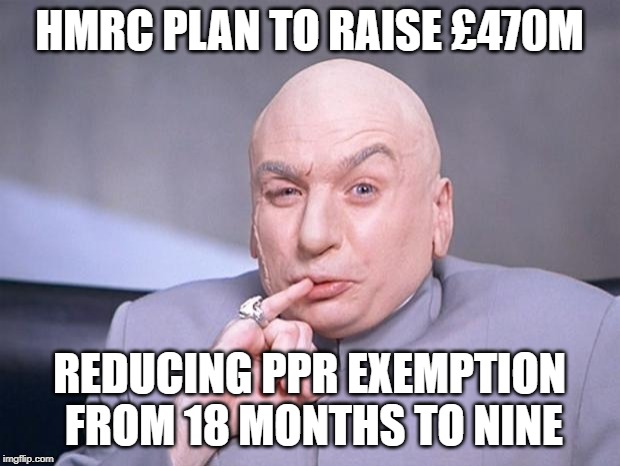 HMRC are looking to change tax relief on homes

The 2018 budget included the news that HMRC wants to review the Capital Gains Tax (CGT) relief enjoyed by those who make gains from selling their own homes known as private residence relief.

HMRC’s review of the principle private residence relief (PPR) if implemented will: reduce the final period exemption from 18 months to nine; and restrict the application of lettings relief only to where conditions on ‘shared occupancy’ are met.

HMRC estimates that these changes will net the Treasury £470m over the next five years, with the changes taking effect from 6 April 2020.

Reduction of the final period exemption

The final period exemption was reduced from 36 to 18 months in April 2014 and HMRC has proposed reducing this further to nine months from April 2020. HMRC notes that the nine-month window is “still twice the length of an average property transaction”, but that will be of small comfort for those taxpayers unfortunate enough to find themselves involved in a ‘non-average’ transaction, such as the many thousands each year who buy a plot of land and build their own home.

There is however a welcome exception for the disabled or those moving into a long-term care-home, where the final period exemption will continue to be 36 months. 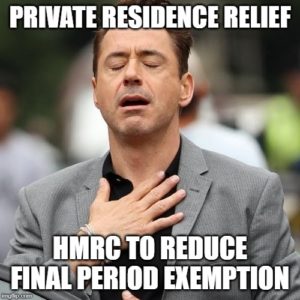 This relief was introduced nearly 40 years ago and was designed “to ensure people could let out spare rooms within their property on a casual basis without losing the benefit of PRR. This may be, for example, where there are a number of lodgers sharing the property with the owner”.

The current legislation refers to property having been “wholly or partly let … as residential accommodation” and makes no reference to ‘spare rooms’ or ‘sharing the property with the owner’. If HMRC had intended the relief only to apply in those circumstances it would have been easy enough to draft the legislation in those terms. For a more detailed explanation of the current lettings relief go to: https://www.gov.uk/tax-sell-home/let-out-part-of-home .

From 6 April 2020, lettings relief will be available only where the owner continues in occupation alongside one or more lodgers, and will not apply where the whole house is let. For many, this will increase the capital gains tax liability arising on the sale of a previously let property by £40,000. However, there are a couple of exceptions, such as if the owner moves into job-related accommodation or temporarily works abroad and lets the property for that period.