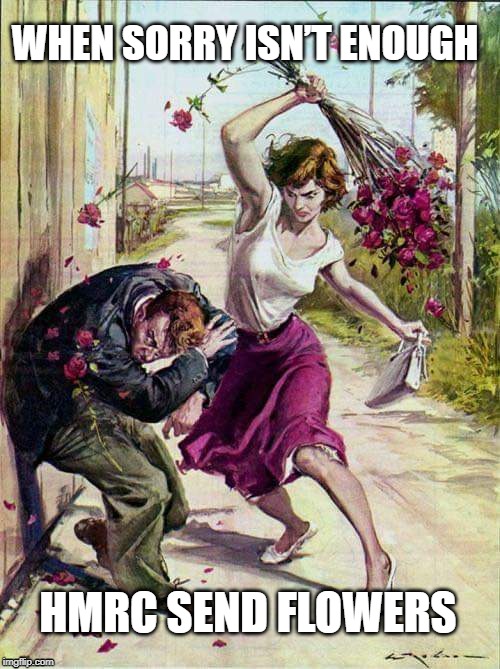 Today I’m reporting on a snippet of recent news when HMRC admitted that over the past five years it has spent on average £10,000 a year on florists’ bills, to try and placate taxpayers who’ve been the subject of blunders by the taxman.

Sometimes a sincere apology or a nice card with a heartfelt note does the trick. HMRC, though, sends flowers when saying “sorry may not be enough”.

The news came about from a freedom of information request, which revealed that HMRC had rivalled Elton John’s floral bill, spending in the first nine months of the 2018/19 tax year, a whopping £10,298 on bouquets.

Explaining the florist bill, a HMRC spokesperson said we send flowers in instances where we consider that a simple ‘sorry’ is not enough and feel that a more personal gesture is necessary to put things right.

Missing correspondence, incorrect PAYE codes, inaccurate tax calculations, failure to make refunds and HMRC’s inadequate helpline are just some of the HMRC frustrations listed frequently on my accountancy forum AccountingWEB.   However the HMRC spokesperson said that they only send flowers as an apology when its errors have affected vulnerable or recently bereaved people.

Examples of where flowers were sent included a pensioner who received a cheque from HMRC for £1, when in fact they were due a tax rebate of £1,800, a heavily pregnant mother-to-be who had HMRC bailiffs turn up on her doorstep, when she was due a refund and in another instance, a Stockport cafe owner got mistakenly handed a £1bn bill when she was also due a refund.

Some of HMRC’s past blunders have become infamous. In 2016, for example, a single mother’s tax credits stopped because HMRC thought she was in a relationship with somebody called Martin McColl after spotting that name on her bank statement – but it was the name of the corner shop where she collected her benefits.

HMRC’s personal gesture approach has not resulted in a flowering of plaudits from its critics. The Adam Smith Institute’s Sophie Jarvis described HMRC’s approach as Monty Python-esque and commented that she would expect a lot more than a bunch of flowers as an apology if she found herself at the wrong end of a major tax authority snafu.

The news of HMRC’s floral apology has resulted in a mini-avalanche of comments to newspapers, social media and various forums; so I’ve picked out a handful of them:

So even when HMRC are trying to be nice, they seem to have an uncanny ability to still cock things up: I really don’t believe I need to comment further!