Radical call for personal allowance to be scrapped 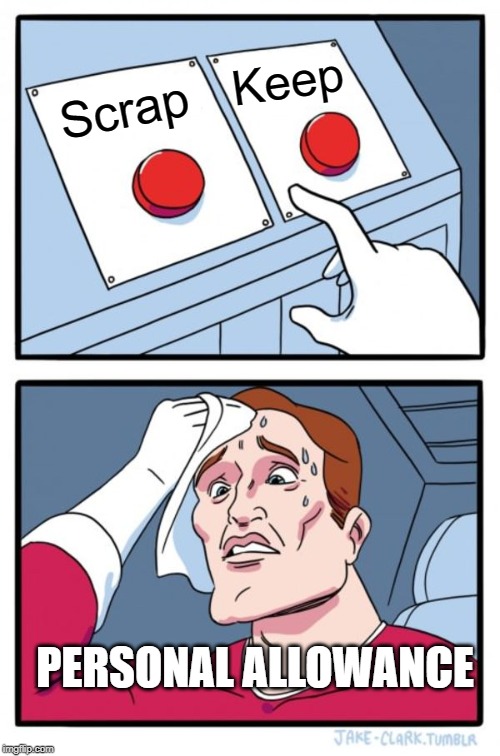 Radical call for personal allowance to be scrapped

Here’s one out of left field: the government should scrap the personal allowance entirely and replace it with a weekly payment of £48.08 to every adult over the age of 18 earning less than £125,000 a year.

The new proposal by the New Economics Foundation (NEF), a left-leaning think tank, has been welcomed by the shadow chancellor John McDonnell and the Green Party’s Caroline Lucas. However, I suspect that the proposal will almost certainly receive a frostier welcome among the Conservatives, who’ve overseen a decade long, inflation busting expansion of the personal allowance.

According to Alfie Sterling, the NEF’s lead economist, the proposal will actually be cost neutral. The personal allowance in the 2019/​20 tax year is estimated to cost the Treasury £112billion, according to NEF modelling using HMRC, OBR and ONS data.

A Weekly National Allowance, the catchy little label they’ve given it, would reroute these tax and NIC savings for individuals into the weekly payment scheme. This would amount to a cost of £127billion, plus a £2billion child benefit increase. The increased cost, the NEF report stated, would be offset by a £21billion saving on the cost of means-tested benefits, since the new weekly payment will boost post tax income for the lowest income families.

Chief economist Alfie Sterling explained: “The persistent increases to the personal allowance of income tax seen over the past decade represent one of the most expensive and regressive public spending initiatives of the 21st century so far,” he said.

“Costing more than the whole of defence, local government and the department for transport combined, and enriching the highest income households almost seven times faster than the poorest. It is time for policy makers to put those resources to better use.”

The trouble with the personal allowance, as the NEF sees it, is really at the extreme ends of the scale. In 2019/20, the allowance will be worth £6,500 in reduced tax liabilities for the 10% highest income families, but worth just £600 for the poorest 10%.

Overall, the NEF said its policy would see 88% of all adults receive a boost in their post-tax income or have it stay the same, helping to lift 200,000 families across the country out of poverty.

Personal Allowance: Too good to be true?

If it all sounds rosy so far, the report does acknowledge the National Allowance would be political dynamite. Abolishing the personal allowance means bringing down the threshold for higher-rate taxpayers from £50,000 to £37,500 since the starting point for 40% income tax moves with the personal allowance.

The other issue, according to Andrew Hubbard a principal of tax advisors RSM UK, is governmental resources. “The thought of HMRC having to deal with millions of extra taxpayers and at the same time as distributing flat-rate payments to everybody does worry me,” Hubbard wrote in RSM’s weekly tax brief. “There will be a whole host of additional implications to think through.”

I agree with Mr Hubbard and would throw one more potential hand-grenade into the mix, National Insurance. NEF’s modelling completely ignores this elephant in the room, presumably because it’s not officially a tax.

Well all I can say is, if it walks like a duck sounds like a duck and looks like a duck, it’s a duck. The days when this earnings related charge was ring-fenced for state pensions and the NHS are long over and it should be called what it is, a tax!.

When you consider that the NI charge for basic rate taxpayers is 12%, plus an additional 13.8% from the employer, and throw that into the pot the position shifts dramatically. I’m therefore concerned that shadow chancellor John McDonnell is such a fan, because the numbers simply do not add up and should he ever get the keys to No. 11 Downing Street, I for one would be seriously worried.