VAT on Food: Are Brownies, cakes or confectionery? 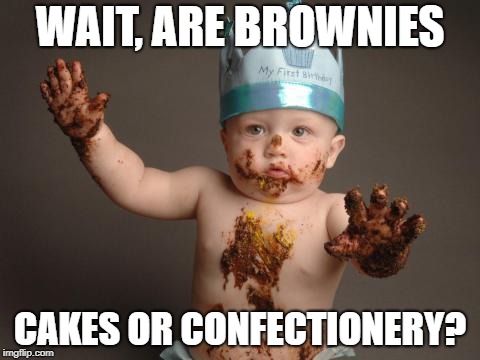 In 1991 a landmark tax ruling deemed that McVitie’s famous Jaffa cake were actually cakes and not biscuits as assessed by HMRC/VAT; thus zero-rating them for VAT purposes.

Now, almost 30 years after this definitive VAT case (is it a cake or a chocolate biscuit?) a new cake question for the 21st century has arisen on whether a Brownie is a cake or confectionery.

There are complex rules on the VAT treatment of food. VAT law states that “food of the kind used for human consumption” is zero-rated. However, there are exceptions to this rule including “confectionery, not including cakes or biscuits other than biscuits wholly or partly covered with chocolate or some products similar in taste or appearance” which are standard-rated.

And if this gobbledygook wasn’t bad enough, to make it even more confusing, there are also exclusions and overriding items or exceptions to the exceptions if you like.

VAT on Food: A cake or not a cake?

This case involved HMRC/VAT taking action against Pulsin Ltd who were selling individually wrapped Brownies as cakes and had zero rated them. HMRC’s view was that the Brownie should be standard rated as a confection which Pulsin Ltd disputed and thus the matter ended up at the tax tribunal.

The tribunal applied the same tests used in Lees/Tunnock VAT case (the chocolate covered mallow ‘snowballs’ VAT case which I’ve previously reported on) and focused on the manner in which the Brownies were consumed. In the snowball case the manner in which the snowballs were eaten was one of the decisive factors. It stated “a snowball…is not out of place on a plate of cakes” and thus has the characteristics of a cake.

The tribunal asked whether a Brownie was out of place on a plate of cakes. The tribunal chair commented, “…put alongside a slice of traditional Victoria sponge, a French Fancy and a vanilla slice or chocolate éclair, perhaps this Brownie might look out of place?” but she went on to say, “…..but if for example at a cricket or sporting tea where it is more likely that bought and individually wrapped cakes will be served on a plate, the Brownie would absolutely not stand out as unusual”.

I am not sure how often readers have a Brownie at a ‘sporting tea’ but it does not appear to be a reference that would immediately spring to mind to the man on the Clapham omnibus.

VAT on Food: Presentation for sale

The result of this test, together with the findings from another eight tests, allowed Judge Amanda Brown to rule that this brownie was indeed a cake and should be zero-rated.

Thus Pulsin Ltd was successful in its arguments, and the tax tribunal agreed its healthy brownie products (Raw Choc Brownies) showed enough characteristics of a cake to be classified as such and zero-rated for VAT purposes. This should allow Pulsin Limited to reclaim over £300,000 of VAT back from HMRC.

Deciding on whether VAT should be charged on a new food product is not as straightforward as you would think. This won’t be the last VAT case to question whether a food item is a cake or confectionery, as long as there are no changes to the current VAT law.

It’s worth remembering that VAT law was drafted in 1972 when tastes and attitudes to eating were decidedly different. Indeed, the tribunal judge commented that, “the current state of law on the taxation of food items is not fit for purpose” and it “fundamentally disagrees with HMRC’s guidance that the borderline between a cake and confectionery presents few problems”.

Judge Brown went on to question whether cakes should be taxed more favourably in light of the recent sugar tax on drinks; however it’s unlikely that this case will make HMRC stop and consider the current VAT law and guidance regarding cakes and confectionery.