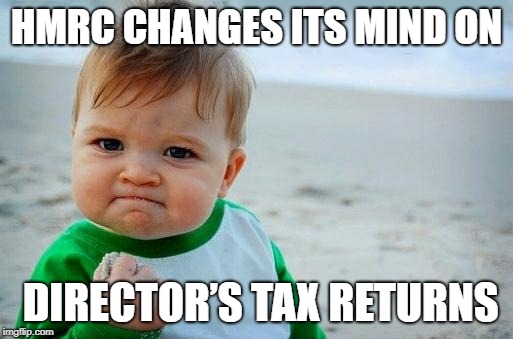 Gov UK Guidance on Self Assessment

For years, accountants and directors alike have been irritated by HMRC insisting that all directors must register for self-assessment, even if they have no tax to pay; but now finally, HMRC has changed its stance and its guidance.

The requirement to submit a tax return, just because you are a director of a limited company, is not imposed by law, but this inaccuracy has not only been ignored but also endlessly repeated by HMRC.

Their advice to register for self-assessment tax returns if you are a company director has been included in guidance on gov.uk, as well as built into the online tools, which help individuals decide whether they need to complete a tax return.

The position of a “no income” or a “no income other than PAYE” director has been tested in several cases before tax tribunals. One such director was Karen Symes, who HMRC insisted should complete a tax return for the tax year in which she became a director, but she received no dividends or income from the company in that year.

In concluding that case Judge Thomas said: “No one has a statutory obligation to do anything in relation to income tax simply because they are a director of a company which is not a not-for-profit company.”

He went on to say: “Being a director per se does not entitle a person to dividends … If dividends from the company of which a person is a director fall within the higher rate band or above, then there was a liability to notify, but not because of being a director.”

The good news is that HMRC has finally changed their position on directors’ tax returns. Their new advice is that a director will not be required to file a self-assessment tax return if he or she is taxed under PAYE and has no additional tax to pay on other income such as dividends.

This new approach by HMRC was announced just before Christmas 2018, and now the gov.uk guidance has also been changed and updated.

Also the tool on gov.uk that helps a person decide whether they need to complete a return, now contains a message stating “you do not need to send a self-assessment tax return” if the person is a director, as long as their income is below £50,000 and they have no other taxable income.

In my opinion the advice wording could be improved, but it will be understood by most people. Also, the gov.uk guidance on directors’ responsibilities no longer refers to completing a personal tax return. Hurrah!

VAT: HMRC Change Input Tax Rules
What Can you claim Income Tax Relief on
How HMRC won the battle of Pirate Island