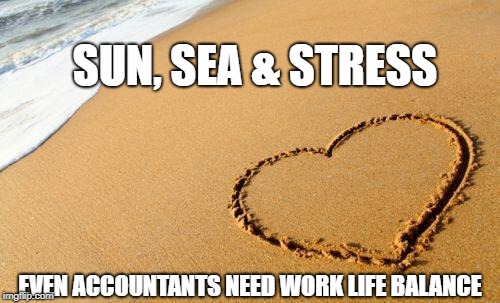 Today’s Blog is about getting your work/life balance in the right proportions and whilst it primarily concerns my profession, accountancy; it could equally apply to other many small businessmen and women.

Alistair Hayward-Wright was feeling exhausted. He just couldn’t let go of his Midlands-based practice. He had a few issues in his personal life but the business wasn’t helping. His smart phone only tightened the shackles the business held over him.

Emails on a PC he could walk away from, but the smart phone pinging away drove him “up the wall”. He didn’t realise it but the sheer number of hours he was working did not make him more productive. Actually they had the opposite effect:

“Psychologically you think I’ve got to answer that email because that’s the way to provide good customer service,” he said. “But actually it’s not, because I got to the point where I was making silly mistakes because I wasn’t focused on that.”

Alistair got his home life in order, which was the easy bit; but the big turning point was disconnecting his emails from his phone. This meant he was not distracted between 6pm and 8am the next morning with emails and not on the weekends either.

If anything, these boundaries have improved his client service: “It was primarily to get the work/life balance back, but secondly, it was better for client service because when I answered an email, I was concentrating on answering and thus eliminated silly mistakes,” he said.

The lines between work and life are blurring

Switching off is becoming ever more difficult for business owners. Earlier this year, research from CV-Library found the worrying extent the always-on culture is having on workplace wellbeing: two thirds of respondents admitted replying to emails and making work-related calls outside office hours, while 80% felt the blurring lines between work and life has had a negative effect on them, especially their health and relationships.

As a society, our relationship with our smartphones has blown the dividing lines out of equilibrium. A recent Ofcom report found smartphone users checked their devices every 12 minutes during their waking day. 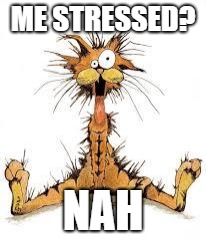 I’ll be fine when I lose my phone!

This is a story about accountant Glenn Martin, who was trying to juggle developing his business with his need for a badly needed holiday. Panic started to set in weeks before Glenn’s two-week Croatian break. He found he was falling behind in his business administration, whilst at the same time he had a rush of new enquiries, that as a growing practice he didn’t want to miss out on.

Glenn’s list of tasks was constantly growing and he even started to regret booking the holiday. In the end, Glenn worked a series of 12 hour days and worked until midnight the night before his departure, leaving packing until the eleventh hour.

The first three days of his holiday were spent staring at his smart phone and firing off replies, however on day 4 he lost his phone and his stress level went through the roof. Then as the day wore on, he found the lack of a constantly pinging phone meant he was able to relax and by day 5 he was able to finally enjoy his break.

Glenn now always leaves his work phone at the office when he goes home and never takes it on holiday.

All of my clients who’ve expressed an opinion, consider that I have a great work/life balance and do not have even a morsel of work related stress. However this has not always been the case.

Around 20 years ago, my accountancy business was still recovering from the financial mauling it received in the economic recession of the early 1990’s and I was working all hours of the day to rebuild it. My occasional holidays mirrored Glenn Martin’s experience, except I didn’t lose my phone and if I’d carried on much longer with long hours and high levels of stress, I doubt if I’d still be on this mortal coil, to paraphrase Shakespeare.

My life changed when one evening there was a knock on the door and there was a Police Officer who advised my wife and I to get to the local hospital as soon as possible, as our son had been hit by a car, was gravely ill and in intensive care.

Thirty minutes later I was sat at my son’s bedside having being warned that his life hung by a thread. My world was completely altered at that moment and I suddenly and completely changed my priorities in life.

My son did eventually make a full recovery, but my life was permanently altered. No longer did I work 12 hour days, holidays became important, I never contacted the office when away and I had a far more relaxed and I believe better perspective on life.

You shouldn’t need a traumatic incident to change your work life balance, but you should look out for and act on the warning signs, that with hindsight are all very obvious.
It’s okay to work the odd 12 hour day, but not every day; your business will not fall apart if you have two weeks off a year and most importantly, have two phones, one for family and friends and one for work which should be switched off after leaving the office.

Notice To File: HMRC Rewrite the rules
VAT Registration: How to go get a number quickly
Budget 2021