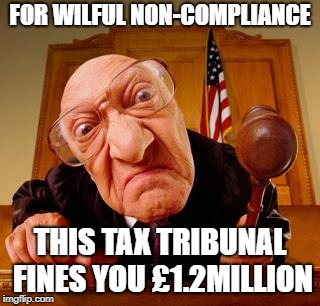 The long running case of Romie Tager, barrister and QC, finally reached a conclusion in the Court of Appeal last month and highlights that there is a clear distinction to be drawn between the most spectacular levels of neglectful non-compliance and the murky world of deliberate concealment.

Mr Tager is a successful barrister; however he is somewhat less successful at completing his Tax Returns. He was routinely late in filing his tax returns and answering questions from HMRC.  Rather than conduct his tax affairs properly, it was his habit to make up for this by making periodic large tax payments, which were normally more than sufficient to cover any eventual tax liability, and this continued for years.

Eventually HMRC took Tager to a Tax Tribunal in 2008, then again in 2014, and in both instances he gave undertakings that he would provide HMRC with full information by an agreed date; but he failed to deliver. Finally, HMRC had had enough and applied to the Upper Tier Tribunal for a penalty in respect of estimated amounts of tax amounting to £80,549 (Income Tax) and £1,171,020 (Inheritance Tax) due from the estate of his late father.

The judge was absolutely appalled by Tager’s flagrant non-compliance, and agreed that a penalty was in order. However, since this was, to his knowledge, the first such case to be heard on a paragraph 50* penalty, he was very conscious that he had no precedents with which to work.

(* Para 50 Penalty: This refers to HMRC’s powers to obtain information and documents and resultant penalties for failure to comply or obstruction)

HMRC’s barrister suggested to the judge that “there is a proper comparison to be drawn between paragraph 50 penalties and those imposed for deliberate concealment since the mischief targeted by them is materially the same that is the intentional or, at least, prolonged withholding from HMRC of the information they need in order to assess the correct amount of tax.”

The judge agreed with HMRC’s barrister and imposed the maximum penalty possible, based upon 100% of HMRC’s current opinion of the outstanding liabilities to Income Tax and IHT; with the penalty imposed amounting to a staggering £1,246,020.

The huge fine finally spurred Tager into action, and he provided sufficient information to enable HMRC to agree that the income tax liability was £1,250 and the IHT due was £195,471. He then took the case to the Court of Appeal in an attempt to overturn the £1.2m penalty.

Lord Justice Henderson agreed with the UT that “Parliament has deliberately decided against providing for a fixed or mechanical relationship between the amount of the tax unpaid and the amount of the penalty”.

Lord Justice Henderson however added that the UT judge was wrong to equate Tager’s non-compliance with deliberate concealment. Whilst Tager’s actions showed a high degree of contempt for what was required of a taxpayer, he was not guilty of deliberate fraud or dishonesty and therefore the maximum penalty of 100% imposed by the UT was not applicable.

The Court concluded that Tager’s wilful non-compliance still needed to be punished and that the correct approach was to avoid drawing comparisons with other penalty regimes and to substitute a figure which “yields a result which is proportionate to the scale and nature of the taxpayer’s default”. It then imposed penalties of £20,000 (Income Tax) and £200,000 (Inheritance Tax).

This has been a long drawn-out case of an individual who believed himself above the law when it came to complying with HMRC’s rules. Tager’s actions were rendered all the more serious owing to his profession as a leading barrister and the sheer epic scale of his neglect of responsibility.
However, no matter how uncooperative he may have been regarding his tax affairs; it was wrong to characterise his behaviour as deliberate concealment unless HMRC could have produced clear evidence of dishonesty.
If you would like more detailed information on some aspect of UK Tax, send me an e-mail and I’ll be pleased to advise further.