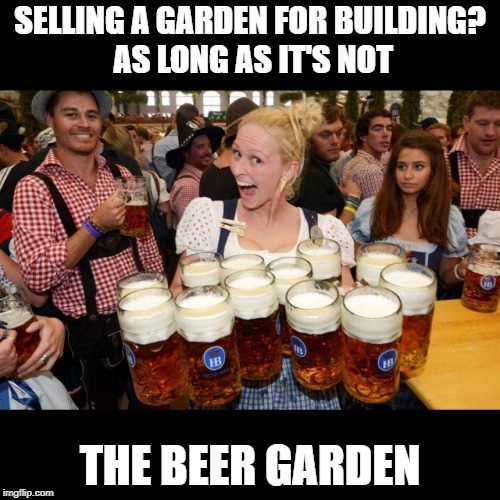 Not in this weather!

How Much Tax will you pay selling your garden for building?

In 2017 the number of new homes built reached its highest level since 2008 but even so, this figure fell well short of government targets.  Several councils are trying to achieve their ‘new build’ target by actively encouraging building on what is termed ‘small sites’. ‘Small sites’ will invariably include building within the grounds of properties with large gardens.

Capital Gains Tax (CGT) will be the usual tax point on the sale of any land but in certain circumstances Income Tax may also be charged, as well as there being the potential of Stamp Duty Land Tax, VAT, and perhaps even Inheritance Tax.

If the land is not sold but the landowner undertakes the building work  themselves or sells to a builder and takes a proportion of the development sale profits, then this is highly likely to be deemed trading and therefore taxable under Income Tax.

This will be the case even if the area being developed had previously been part of the garden attached to the main residence; building a house to sell amounts to ‘trade’. As trading, the building plot is deemed to have been converted from capital to ‘stock’ at market value as at the commencement of trade.

Normally, such developments are undertaken by a professional developer, the land having been sold to them by the original owner and as such this sale has CGT rather than income tax implications. However, invariably no actual tax will be payable by the seller, as the sale is likely to be covered by the principal private residence relief or PPR.

PPR relief is one of the more valuable exemptions in the whole of tax law as it exempts most owner-occupiers from a charge to tax. However, the exemption is not automatic.

The two phrases that are really important are “garden and grounds” and “permitted area”.

It is a question of fact as to what constitutes “garden and grounds” and whether that land can be regarded as being used for the “enjoyment” of the residence; there is no legal definition. HMRC’s guidance on PPR stresses that the land should serve “chiefly for ornament or recreation”. Land let or used for a business (eg farmland) is not a “garden”, neither is land which has been “fenced or divided off from for development”.

It is important to remember that that HMRC’s guidance is not necessarily law. HMRC expects the garden to be used for growing plants or fruits and vegetables on a purely domestic basis. Therefore having some beehives and selling the honey at the local farmers’ market, or letting a neighbour’s animals graze on the land for a fee, for example, will give HMRC cause to deny or at least question a PPR claim. It might also affect the granting of planning permission for the land.

This is defined as an area of up to 0.5 of a hectare or 1.23 acres. The area may be larger if, having regard “to the size and character of the dwelling-house, that larger area is required for the reasonable enjoyment of it as a residence”.

The question of the ‘permitted area’ was considered in a court case a few years ago, Longson v Baker. The taxpayer (Baker) claimed that land additional to the permitted 0.5 of a hectare (used to house and graze his horses) was required for the ‘reasonable enjoyment’ of his dwelling house. He contended that all of the land purchased with the property (7.56 hectares) was required, by virtue of the ‘equestrian character’ of the property. The judge disagreed, confirming that the test is objective rather than subjective. In this case, it was found not to be objectively necessary to keep horses at a house in order to enjoy the property as a residence.

The law refers to land which the owner “has for his or her own occupation and enjoyment”. HMRC has taken that to mean the exemption requires “ownership and occupation” at the date of sale.

HMRC’s interpretation is based on an old court case in which a taxpayer sold a house whilst retaining part of the garden, which was disposed of at a later date. Whilst the original sale of the house was exempt under PPR, the subsequent second sale 4 years later was refused exemption as the court found that at the date of sale the land was no longer the “garden or grounds” of the property and refused relief.

There was however some comfort for individuals who sell their house and part of their garden but for any number of reasons, the main culprit being the planning system, there is a gap between the two sales. The judge deemed a period of 18 months between moving out and selling the property and or land, without any loss of the PPR; it would be fair and reasonable.