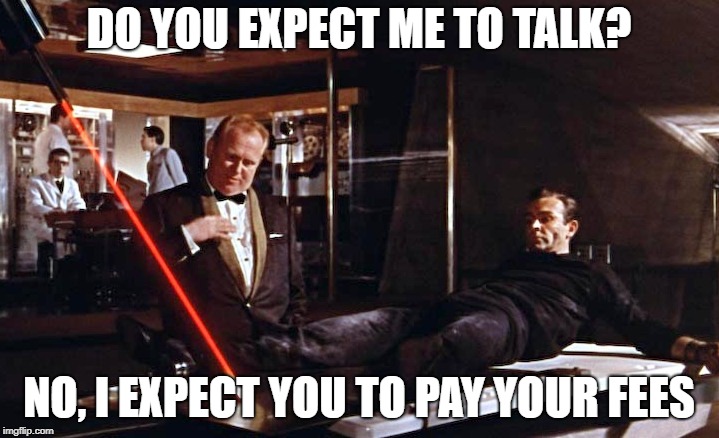 The names is this blog have been changed.

A recent news report on how Sean Connery paid his accountant got me thinking of odd and often bizarre ways that clients have paid me and anecdotally, another accountant I know.

Most of these stories brought a smile to my face so I thought I’d share a few with you. But first back to 007.

In 007’s case, Sean Connery paid his accountant in film costumes, according to the director of the James Bond archive, Meg Simmonds who has now been left searching for Bond costumes from the sixties.

Meg Simmonds only discovered Connery’s unusual payment for his accountant after buying back the Anthony Sinclair coat Connery wore in Dr No at an auction. The auctioneer selling the coat disclosed to Simmonds that the vendor “might be Connery’s accountant”.

That’s when Simmonds connected the dots and realised that he’d paid his accountant with costumes. She the unearthed a production letter from Bond producer Cubby Broccoli, which confirmed that Connery had requested and received suits from every film he appeared in as well as other things, including a watch and a set of golf clubs, must of which went to his accountant.

A couple of years ago I had a client ‘Jack’ that I helped get through a tax investigation and he was very grateful, until that is I presented him with a bill for £720. He was not a happy bunny and told me that I should waive the extra charge for his loyalty over the years. I then tactfully pointed out that my fee had been heavily discounted already and there was no room for a further reduction.

Jack was still not happy and stormed off clutching his bill and muttering, “bloodsucking accountants” but nevertheless promising to pay me my “pound of flesh”.

The following morning, Jack turned up at my office pushing a supermarket trolley and proceeded to take dozens and dozens of small bags and placed them on the counter and then left muttering, “have fun counting that lot!”.

When we looked in the bags Jack had indeed paid his bill, but in a combination of 1p, 2p and 5p coins, amounting to over 30,000 coins in total.

I used to have a client, a Mr Chowdhry, who ran a successful Indian Take-a-way, but extracting money from the gentleman was like trying to extract money from the proverbially stone. He had a dreadful reputation around the town for either late paying or trying to get an extra discount, often months after he’d received the goods/services in question.

After years of late fee payments, one day after I had called into the restaurant on the way home for the latest session of nagging and arm-twisting to get my money when he offered me a ‘free curry’ as recompense, which I reluctantly accepted. The curry was excellent and without realising it, I had stepped on to the slippery slope.

You’ve guessed it, thereafter, every month my fees were paid by collecting an Indian take-a-way for me and my family, with my staff being given a 33% discount. The value of the curry was of course declared in my accounts!

Accountancy Fees: Quite alot of pot

Another accountant friend of mine Mervyn told me recently that he’d helped a client of his, a landscaper, through a particularly tough time in his business. The client had been very grateful and turned up at his office one day with a large pot plant which he said was a herbaceous flowering plant called Cannabidiol Sativa. The landscaper advised him to take it home and place it in a sunny position and cryptically added that he’d be pleasantly surprised when the plant matured.

Mervyn didn’t think anything about the name or the cryptic advice and thanked him for the gift. However instead of taking it home he decided to keep it in a sunny position in his reception and it grew and grew and was a very attractive plant that other clients complemented him on.

My friend was suitably proud of his horticulture efforts, that is until a police officer who was walking past the office one day, called in to inform him that he was confiscating the plant and that it was likely that he’d get an Official caution for growing cannabis.

Accountancy Fees: A pig in a poke

My final story today involves an old farmer client of mine Fred, who breeds pigs. Fred is a lovely man but staggers from one minor financial crisis to another and we usually have to wait a long time to get paid.

Earlier this year after he’d agreed his Accounts and Tax Return; once again he told me that he couldn’t pay me until he’d had his payment from the ‘ministry’, due in 3 months’ time. He then said that by way of interest would I like ‘a few sausages’ as he regularly sold some of his pigs to a local butcher who part paid him in sausages, so I agreed.

Two weeks later, the day after I went on a week’s holiday, he called into the office and dropped off 10 kilos of sausages at reception with the comment ‘enjoy the sausages; the butcher has won prizes for them’. All of my staff took home a pack of the prize-winning bangers and on my return the cupboard was bare!