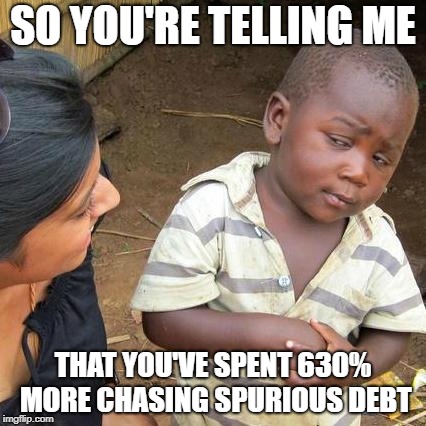 The amount HMRC spends annually on private sector debt collectors has increased by 630% in the last four years, and by an amazing coincidence, this sharp increase coincides with the introduction of RTI (Real Time Information submission which have to be now done monthly rather than annually, for PAYE).

HMRC claim that this is value for money and that the cost of debt collection is a necessary part of its role to close the tax gap. However, the tax gap is a vague figure which only HMRC can quantify and even then, at best it’s a guesstimate. Also, HMRC have failed to provide any accurate analysis on which to justify a spend of £39m to collect the alleged total of outstanding tax debts.

HMRC itself made the startling admission in the RTI post-implementation review that the vast majority of tax debts they looked at in ‘closed cases’ never existed in the first place. This is what HMRC admitted in December 2017: “Analysis of a sample of closed cases showed that, on average, 78% of the outstanding debt was spurious”.

If that is indeed the case, on whose authority was HMRC allowed to increase its spend on private sector debt collectors? HMRC’s position as a non-ministerial department designed to preserve impartiality in the tax system leaves only the NAO (National Audit Office) and the PAC (Public Accounts Committee) to challenge its operational decisions on a value for money basis.

Feedback from the trenches

Hardly a month goes by without employers and other accountants, telling me stories of aggressive encounters with debt collectors. These private sector debt collectors often have no background paperwork to justify their enforcement action, just a figure from HMRC to collect. If they are not paid they will threaten to take goods to the value of the alleged debt.

Commenting on the research Mark Giddens, head of UHY Hacker Young, said: “Private sector debt collectors have been accused in the past of taking a gloves-off approach. Some say that using private collectors is the wrong way to chase tax debtors, especially as many can’t – rather than won’t – pay their debts.”

Giddens continued: “HMRC is under increasingly heavy pressure to ramp up their tax take but must do its utmost to see that the public are not unnecessarily pestered.”

HMRC Getting their sums wrong

I know from the experience of many of my clients that debt collectors arriving at a business premise can cause massive reputational damage and cost, not to mention worry for employers. If the problem is allowed to fester, incorrect winding-up orders may also be generated from the same corrupted RTI data which gave rise to the incorrect tax debt.

Our Practice Manager Lucy Jones is on the special ‘agents’ hot-line’ to HMRC on a daily basis, querying demands to one client or another and anecdotally, the error rate on the amount demanded is well over 65%.

Why is this happening?

The tax gap is one of HMRC’s key performance indicators. So surely there should have been some root-cause analysis of the accuracy of tax debt which makes up a large part of the tax gap?

In my opinion, the senior management of HMRC needs to address the following points:

The overall consequences of HMRC’s errors is, that whilst the vast majority of employers are totally compliant with their PAYE obligations, many of them are being harassed by HMRC’s army of debt enforcers for debts which, in most cases, simply do not exist.

HMRC debt management staff sees figures of tax debt that are incorrect, but in most cases they are unaware of the errors, although their PAYE colleagues know the RTI data can’t be relied upon, they don’t communicate this to their debt management colleagues .

As a result, the debt management team brief the private sector debt collectors to collect a debt that doesn’t exist and pay these goons a significant sum to do so.

Everyone, including HMRC, agrees that there are flaws in the RTI software which is the fundamental cause of the plethora of errors. So, the question is, why after 5 years’ of operation, hasn’t the software been corrected.