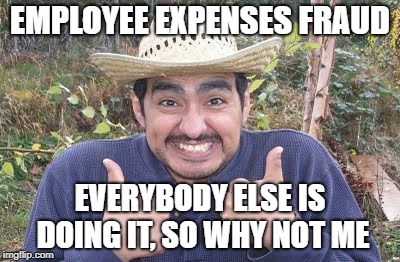 New global research carried out by UK software house webexpenses, has put expenses under the microscope and uncovered a staggering insight into the sophistication of methods that employees worldwide are using to submit fraudulent claims.

In many instances businesses may not be aware of the complex nature of expense fraud and the multitude of ways it could be hitting their organisation. However, research undertaken in 2017 found that, 42% out of UK office workers surveyed agreed that if they are sensible with fraudulent claims they are unlikely to be challenged.

Mileage is the most commonly claimed back form of transport (57%), so it wasn’t a surprise to learn that nearly half of employees (47%) admitted to increasing the number of miles they travelled, with many respondents confessing to “only ever adding a couple of miles on”. The justification seemed to come from the 71% agreeing that ‘most people increase the miles they’ve travelled’ and a further 43% who agreed with the statement ‘everyone overclaims so they don’t see an issue with it’.
What’s more, it appears fraud has become further excusable by over half (51%) of UK respondents thinking if they travel for work they deserve a treat. This is further supported by the 16% that confessed to treating themselves, a partner or child to a present while away on a business trip. The results indicate that an increasing amount of employees think that if they put the hours in they deserve a reward, a concept that if ignored could cumulatively have a detrimental impact on the finances of a business.
The results as a whole indicate a growing endemic in today’s business culture where employees have learnt how to play the system moving to more surreptitious techniques of falsifying and exaggerating already existing claims to ensure it goes unnoticed. 26% of UK employees admitted to requesting a blank receipt for taxi travel to enable them to exaggerate the cost.
Although the research suggests that the tactic of little and often seems to be the most common and safest form of fraud, there are still employees trying their luck with more brazen expenses. This was seen in those respondents who confessed to claiming a digital SLR camera or a gas cooker.

The vast majority employees surveyed (83%) considered themselves as being basically honest and wouldn’t dream of stealing say a chocolate bar from their local shop. So how does this equate to around 50% of employees who admitted fiddling their expenses in some way?
It would appear from the survey that employees who claim additional fraudulent or exaggerated expenses exercise a completely different morality from their normal private life, when it comes to their employers. The four most common justifications were:

‘I work hard so I deserve a reward’
‘Everybody else is doing it, so why not me’
‘The company makes big profits so it’s only fair that I should have something extra’
‘All the hours I spend travelling, warrants a bonus’

Adam Reynolds, CEO at webexpenses commented:
“The results bring to light the changing patterns of expense fraud, the shift to more subtle methods to efficiently enable claims to fall through the cracks and raise no red flags. The most prominent area being exaggerating mileage claims, this could be down to employees feeling it’s completely innocent just rounding up and with a manual process it’s a lot harder to identify. 42% of employees surveyed said there were a lack of adequate checks to keep fraud under control at their current place of work, this ultimately allows fraud to continue ticking on and the longer employees get away with it the more accepting it becomes and the less guilty they feel.”