IS HMRC EXTRACTING THE URINE? 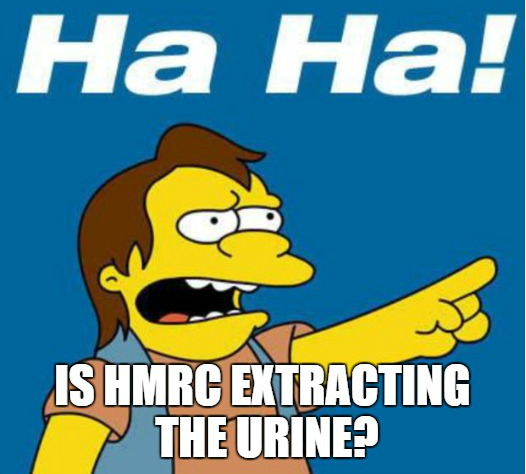 Is HMRC Extracting the urine?

This week’s Blog is about growing concerns that HMRC is going well beyond its remit in demanding more information than the law requires taxpayers to submit.

Let us start with the legislation which gives HMRC the power to compel us to make tax returns, which is contained in the Taxes & Management Act 1970 which states: “a return of …… income, computed in accordance with the Income Tax Acts and specifying each separate source of income and the amount from each source.”

I would like to know; just how do we get from being required to return our income to being required to tell HMRC the sort code and account number of our personal bank accounts or information on our other halves?

I completed my Self-Assessment tax return for the 2016/17 tax year online and I was not due a tax rebate. However, I found a stumbling block to submitting my return when I arrived at the section concerning overpaid tax. I could not progress beyond this page without either letting HMRC have my bank account details or making an incorrect return by claiming not to have a bank account at all.

Unfortunately, there is no independent oversight of HMRC’s software and its compliance with the legislation, and this is one section of the electronic SA return that I would like to see reviewed. I believe it represents a civil liberties infringement: the SA return can’t be completed without complying with a request (for a bank account number), which, legally, HMRC has no right to make.

Here is the screen to be completed: 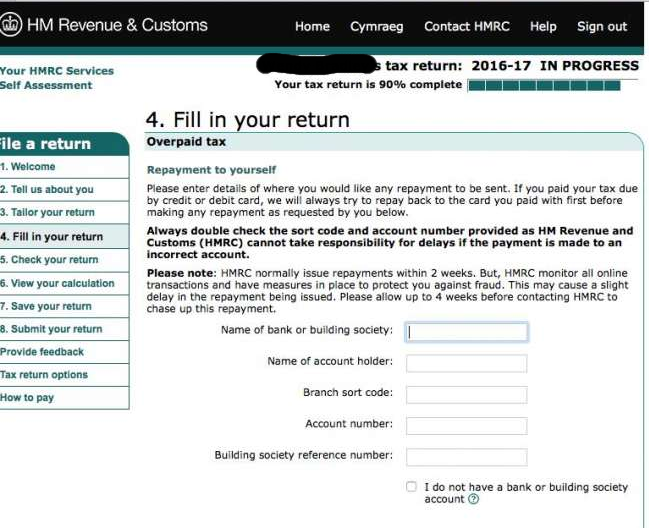 This is what happens if you try to short-circuit the process by pressing “send” without completing either your bank details or the incorrect statement that you do not have one: 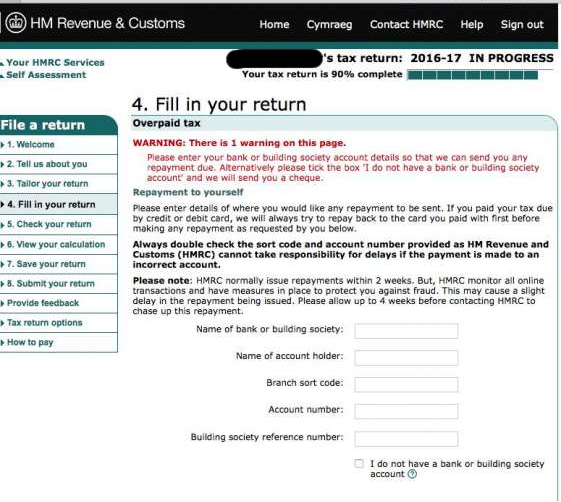 You could argue that this is a relatively minor infringement of my civil liberties. By giving an organisation the name, sort code and number of your bank account does not in itself allow them access to the information about the contents of this account, let alone to any money it might contain.

Yet in a world where we are perpetually told to be wary of online fraudsters trying to glean our bank details, it seems bizarre that HMRC acts in this way. My point is that HMRC should not be compelling us to hand over information that it has no statutory right to acquire.

When the General Data Protection Regulation comes into force on 25th May 2018, will HMRC need to review its actions? The guidance from the independent Information Commissioners Office is clear that the potential to exempt “taxation matters” from the transparency obligations and individual rights guaranteed by the regulation exists, but only if this exemption “respects the essence of the individual’s fundamental rights and freedoms and is a necessary and proportionate measure in a democratic society”.

I have to ask should any taxpayer accept that HMRC can harvest his or her bank details via their software design, rather than by a statutory power given through legislation? Alternatively, you could argue that if you have given HMRC your bank details before when you were expecting a repayment; where’s the harm in handing them over again?

Taking the ‘Big Brother’ argument a little further, do we also accept that HMRC may make a voiceprint from any telephone conversations we have with them and use that voice print to identify us in the future? This is not science fiction: this is already happening.

Since February 2017, HMRC has been offering people who ring the tax credits and SA helplines the opportunity to record their voice and have their voiceprint used to identify them in future. This sounds like a wonderful techy customer service initiative when it is described as:

“HMRC will be encouraging customers who call to take advantage of the Voice ID service, but they can choose to opt-out and continue to use HMRC’s services in the usual way if they prefer”.

The above statement clearly implies that the Voice ID service is voluntary, doesn’t it? However, when I tested it out I found myself in the automated system and was asked to repeat a phrase to be recorded, I could not find any means to refuse to give consent or to opt out, or indeed any explanation that I could deny consent. I was reduced to repeating “no!” instead of the requested phrase until the automated system, more in sorrow than in anger, explained that it couldn’t complete the transaction, but I would be offered the opportunity the next time I rang.

HMRC has, quite rightly, powerful tools at its disposal to identify and combat tax fraud and protect the public purse. But equally, it needs to understand that this does not give it the right to take liberties with the rights and freedoms of ordinary taxpayers.

Have we really got to the point where every time we interact with HMRC we have to make individual subject aspect requests or SAR’s, for sight of the data HMRC holds on us, and then ask for it to be deleted?

(HMRC’s website at: https://www.gov.uk/guidance/hmrc-subject-access-request states: “You have the right to get a copy of the information that is held about you. This is known as a subject access request (SAR) and you can make a request to HMRC under the Data Protection Act”).