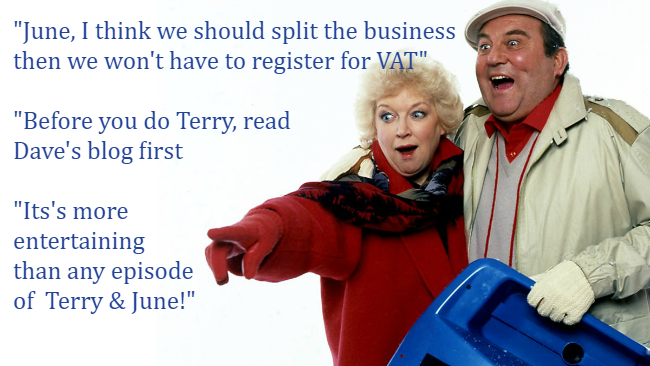 In the recent Budget the Chancellor announced that the VAT registration threshold is to be frozen at £85,000, until at least April 2020.

However business splitting is a controversial topic and you may have to decide whether this is a solution to the VAT threshold not moving with inflation, as in recent years, or will it create further problems for your business.

The view of small businesses

Many of my accountancy colleagues take the view that the VAT registration threshold should remain at £85,000 for many years to come, ie gradually expanding the number of businesses in the VAT club and reducing the ‘cliff edge’ figure in real terms at which businesses trade just below the threshold. I disagree, my personal view is that once we leave the EU that the VAT standard rate be reduced to 10%, but more on that in a future Blog.

Putting on my Sally Morgan hat (the well-known clairvoyant and psychic on ITV), I predict that in the coming months a steady stream of clients will ask me about the potential for splitting a business into two parts, under different legal entities; indeed I’ve already had a number of such conversations.

The client’s starting position is invariably that they’ll split their business into 2 or more entities, with each entity trading below the VAT threshold, giving them plenty of scope to increase prices on an annual basis, without breaching the £85,000 figure.

The Blackpool guesthouse – a case study

Let us consider a seaside guest house, which has bed and breakfast income and a small bar on the lower ground floor with an alcohol licence. It is run by Terry and June as a partnership. The business trades just below the threshold quite deliberately; Terry and June close the hotel for three months between January and March, and annual turnover is £83,000. They would like to increase their prices in April 2018 by 5% because of increases in business rates, electricity etc however, this would produce sales of £87,150 (all things being equal) and a potential VAT problem!

Terry and June have asked you if any of the following measures can be successfully put into place, so they can increase their prices and avoid a VAT problem:

HMRC has powers to treat separated businesses as one legal entity (see VATA 1994 Sch 1, paras 1A and 2

“In determining for the purposes of subparagraph 1A above whether any separation of business activities is artificial, regard shall be had to the extent to which the different persons carrying on those activities are closely bound to one another by financial, economic and organisational links.“.

The key challenge is for HMRC to be able to prove that the two businesses have “financial, economic and organisational links.” The key word is “and”, so critically all three links have to be proved rather than one or two of them. These links are considered below.

HMRC refer to business splitting as disaggregation and if they issue a direction notice, the main outcome is that the combined businesses will need to register for VAT as a single entity moving forward, but crucially not retrospectively.

So what does HMRC class as links?

What does HMRC class as links?

To create a successful business split it’s important to consider the following issues:

Going back to Terry and June, which of their suggestions to the VAT registration problem do you think will work? The answer is that there are potential risks with all of them, although the separate invoicing by the cleaner is really a non-starter because the cleaner is clearly providing services to Terry and June and not the guests.

A successful business split is often very hard to achieve when family members are involved. This is because there is less incentive to do things on an arms-length basis, because the money all belongs to the same family pot. Also, customers perceive just ‘one business’ to be in place.

As a final tip: the only solution to Terry and June’s problem that is pretty much guaranteed to work is to get a third party involved who is completely independent from the family tree. That person could take over a part of the business, such as the bar at Terry and June’s guest house and pay a rent based on a profit split.

I am however well aware that many of my readers have fertile and creative minds and may come up with solutions that nobody else has thought of, so feel free to ask me the question but be prepared to be disappointed if I find a flaw in your cunning plan!